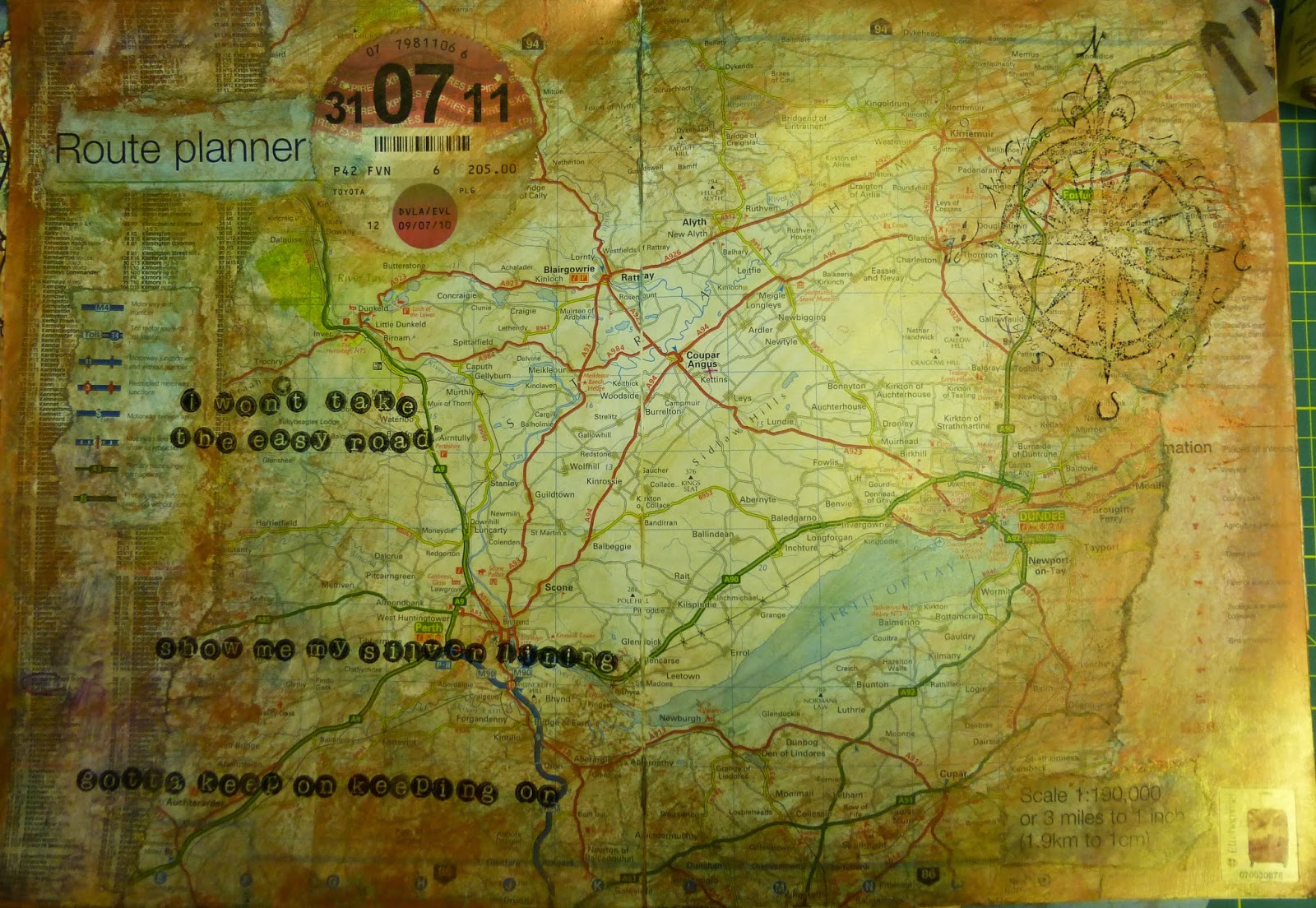 Frieda Oxenham inspired me to have a go at journalling and I joined this year's 'Documented Life' project run by Art to the 5th.  It is free to join in and there are lots of great tutorials (some free to members, some paid for, although I don't know if these have been affected by the new VAT regs yet... the free ones should be OK).  I haven't done this sort of thing before, but I've got lots of art materials from years ago and plenty of 'scrap' for scrapbooking, so I thought 'why not?'  I ordered the Dyelusions journal recommended for this year's project and it arrived in time to get started (rather slowly) when the first challenge was announced last week.

The first week's journal prompt, 'Be your own goalkeeper', had me a bit stuck at first but the art challenge, 'book paper', wasn't a problem - I thought of using a defunct road atlas.  We are planning to decoupage the walls of the new guest room with maps (eventually!) so I thought this would be good practice for using maps too.  The challenge for January is 'The blank page and how to face it!!'

Now it is more or less finished - I've left space on the right hand side of the spread so I can log my goals/projects for the year as they come along. The paper was a recently superseded road atlas (from 2006) and I used pages that centre in on my home. Nothing very sophisticated materials-wise - I used Windsor & Newtons Acrylic Matte Medium as a glue and medium, and took the paper down a bit with some old Rotring Artist Colour inks I have (25 years old and they stink in the bottle, but still work). Rowney gold and copper metallic acrylic on top. I still haven't found where I put my artist's brushes since the move, so I did it all with a half inch DIY paintbrush, kitchen paper and some babywipes. I liked the page header 'Route Planner', as it feels like life is all about travelling and the quotes are from 'Silver Lining' by First Aid Kit, a song that has been following me around during the last week - https://www.youtube.com/watch?v=DKL4X0PZz7M

I also used the tax disc that was on my old Toyota when I first got it, as it is on its way to a new home now - more about that later.

I'll be away for most of next week, but I've started the second journal prompt which was announced today - 'The beginning is always today.'- Mary Shelley - by collaging some scrap paper from my last Japan trip, since we are going again on Tuesday.  I won't be taking my journal with me, because we are trying to keep the baggage weight down, so I'll collect some stuff for it while I'm there.  So far I've used up a Japan Railways map of the Tokyo rail network, a chopstick wrapper from the ryokan where we stay in Tokyo and an unused Japanese Customs declaration label.  The art challenge is 'gesso', but as I haven't got any I can find at the moment and it is basically acrylic primer, I'll probably use that instead.

It all looks like it is going to be fun to do and I think it is good for creative thinking to occasionally do something like this that makes you think a bit outside of your comfort zone.  I'll post the pages here as I do them.
Posted by Susan Briscoe at 19:03

Love what you've done here. And nothing like a trip to Japan to collect some interesting ephemera.

Thanks Frieda! I will be scavenging for bits and pieces even more so on this trip. I started saving stuff from trips from various trips for nearly the last 10 years, so once I can find where everything had been stashed, there should be some quite interesting things. I like the idea of repurposing 'junk' which has more relevance to me than a lot of bought stuff.