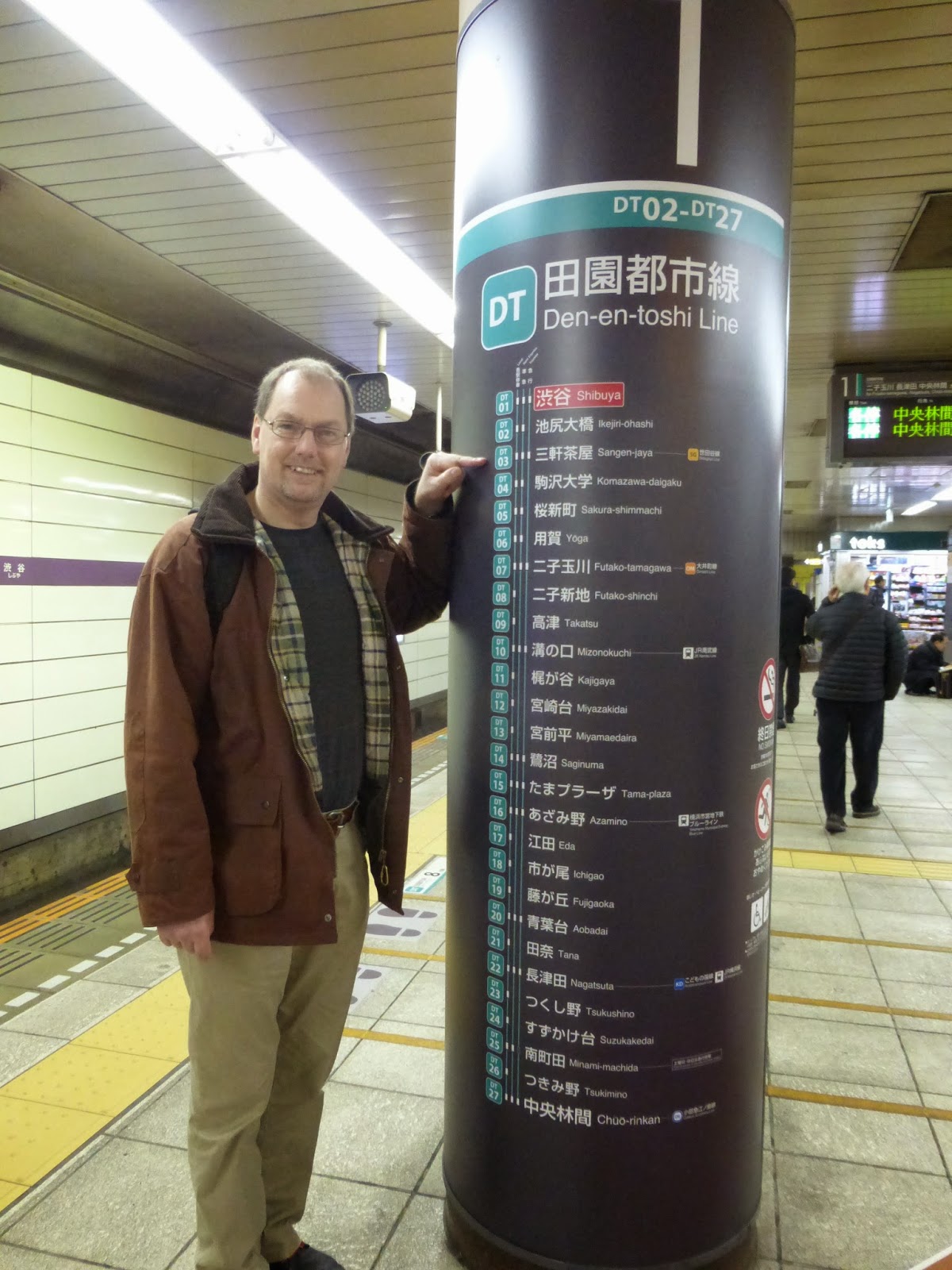 Our second day in Tokyo and our first visit to the Setagaya Boroichi flea market was rained off somewhat, and we gave up half way through the day, bumping into one of Katie's friends and ending up at a kaitenzushi (conveyor belt sushi) at the Carrot Tower instead.  It was too wet for a single photo outdoors and the view from the 27th floor of the Carrot was too cloudy for any decent photos.  We went back to Setagaya on Friday morning, as it is only a few train/tram changes from the start of our trip to Hakone from Shibuya station and the weather was fine. 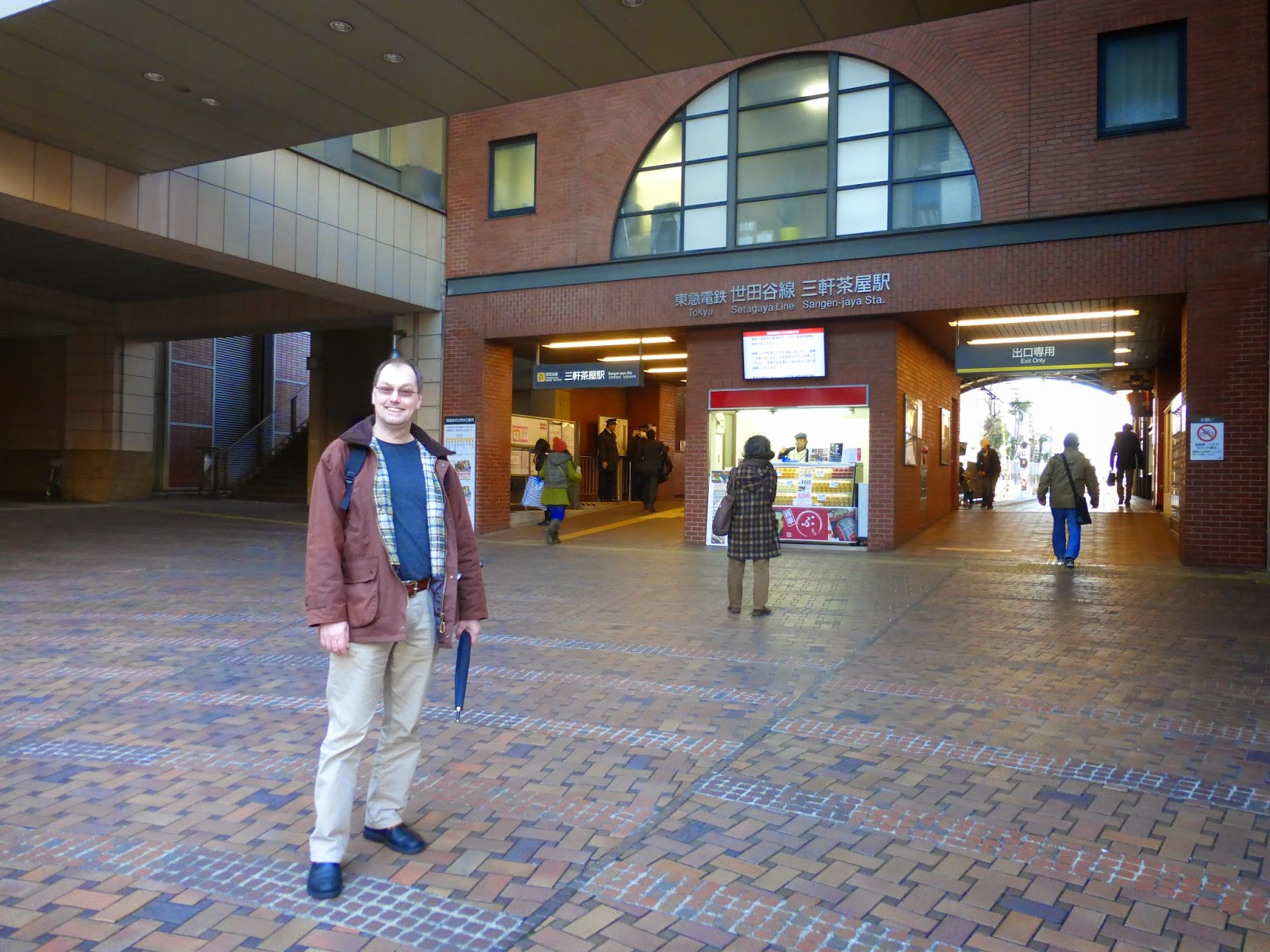 The tram to Setagaya. 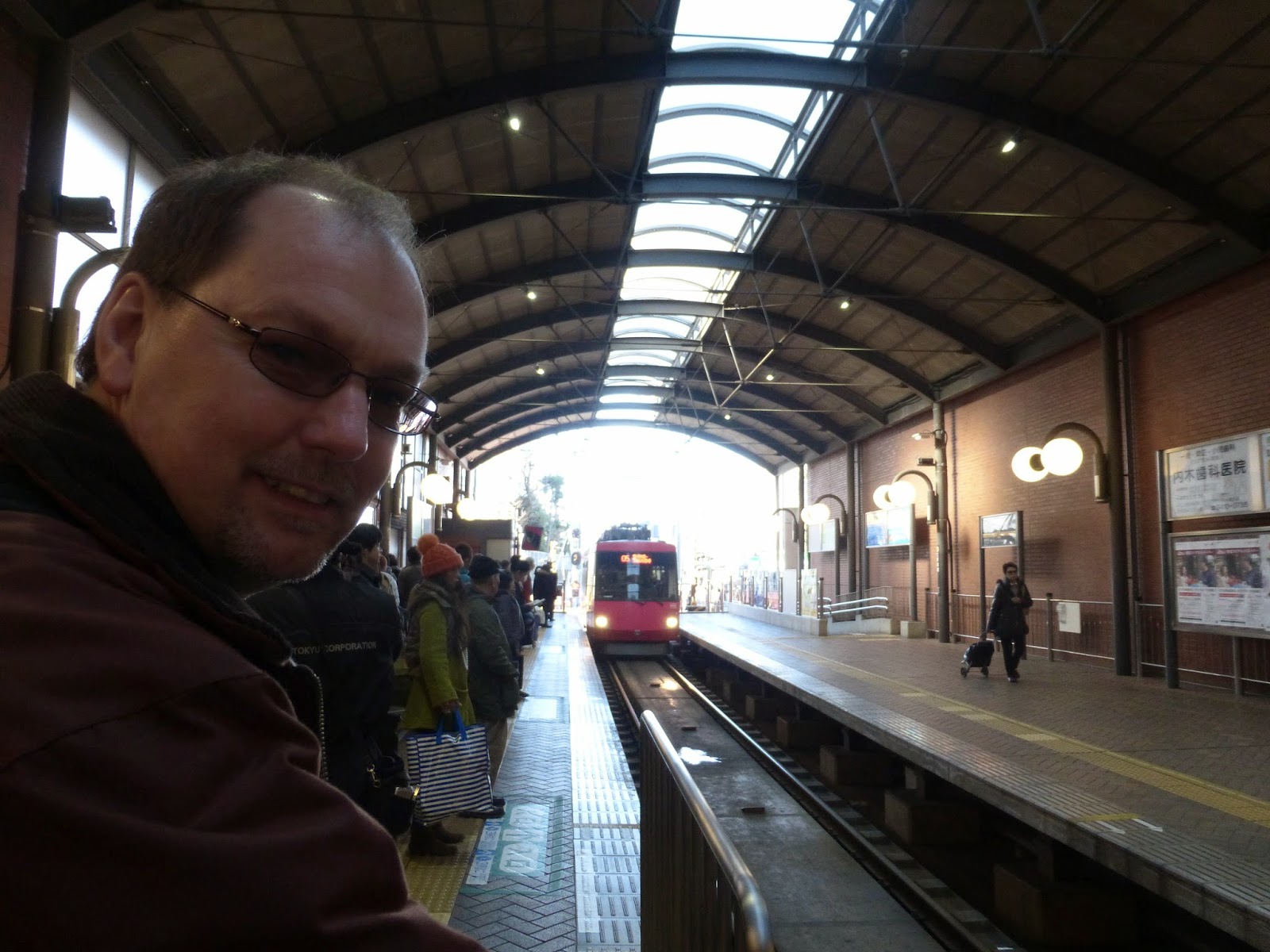 It was much busier than Thursday and the sunshine really brought out the crowds - it was so warm for us. 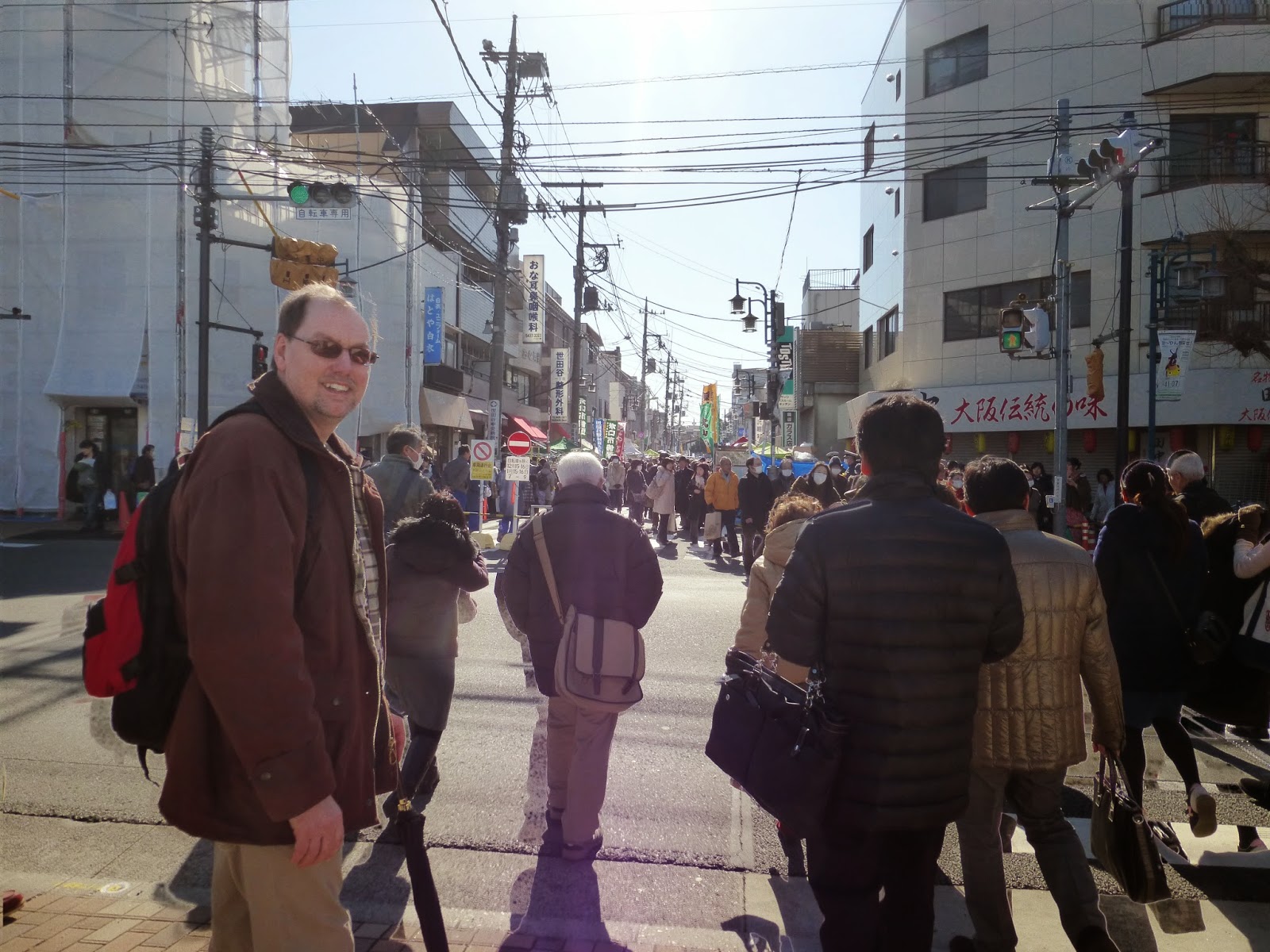 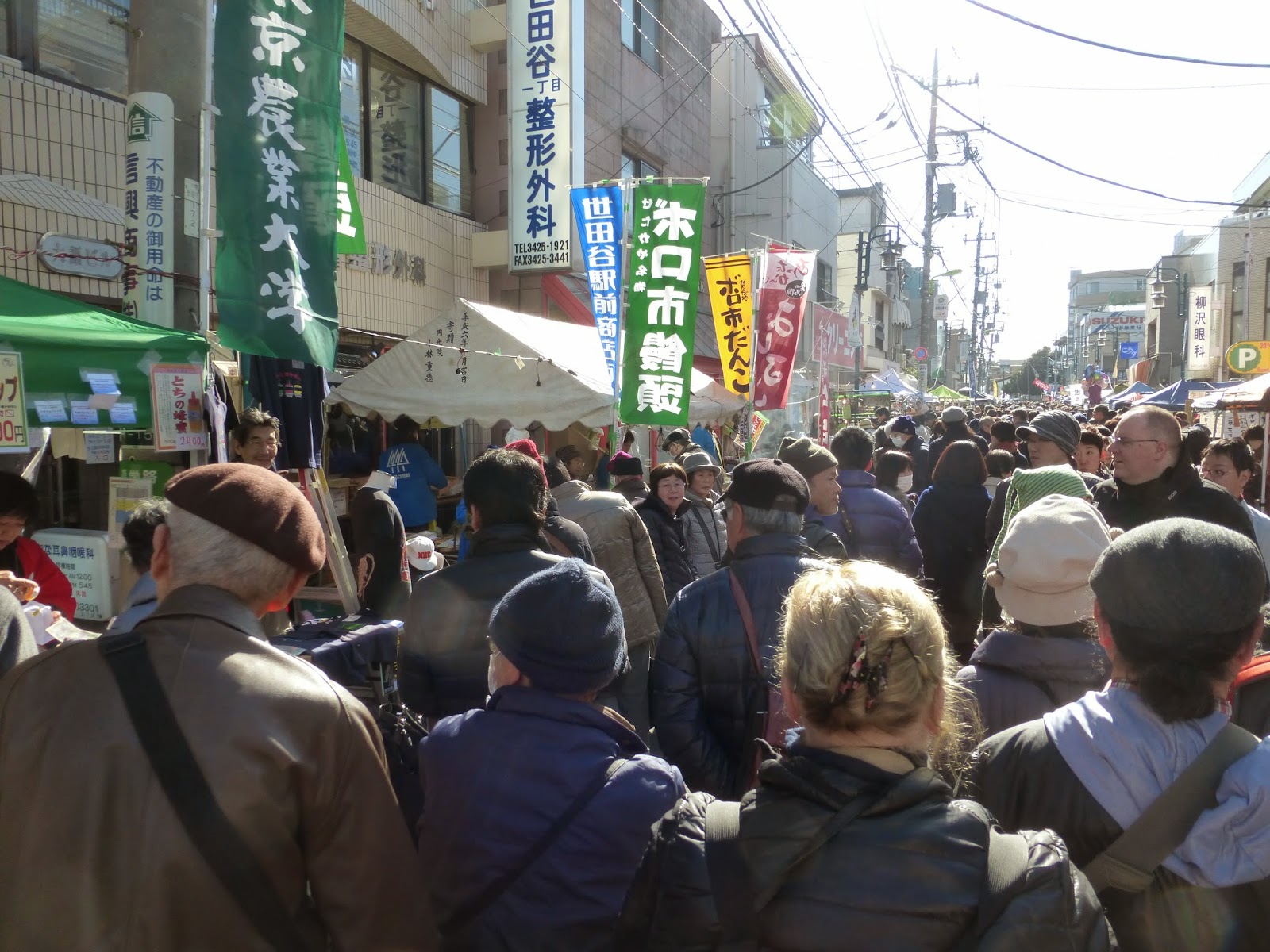 There is a real mixture of stalls, many selling food (about a third), junk stalls, antique stalls, kimono stalls etc.  There were hundreds of stalls. There were some cheap kimono but nowadays anything half decent and collectable seems to start at 20,000 yen plus - the days of finding prewar furisode and the like at knockdown prices are gone and it is a myth that the stallholders don't know the value of their goods.  I found a handful of fairly modern kimono in wearable condition on the first day, mainly tsumugi (spun) silk that weren't overpriced, but most of the things on the 1,000 yen racks were not that exciting.   On the second day, I found various goodies (more about those later). 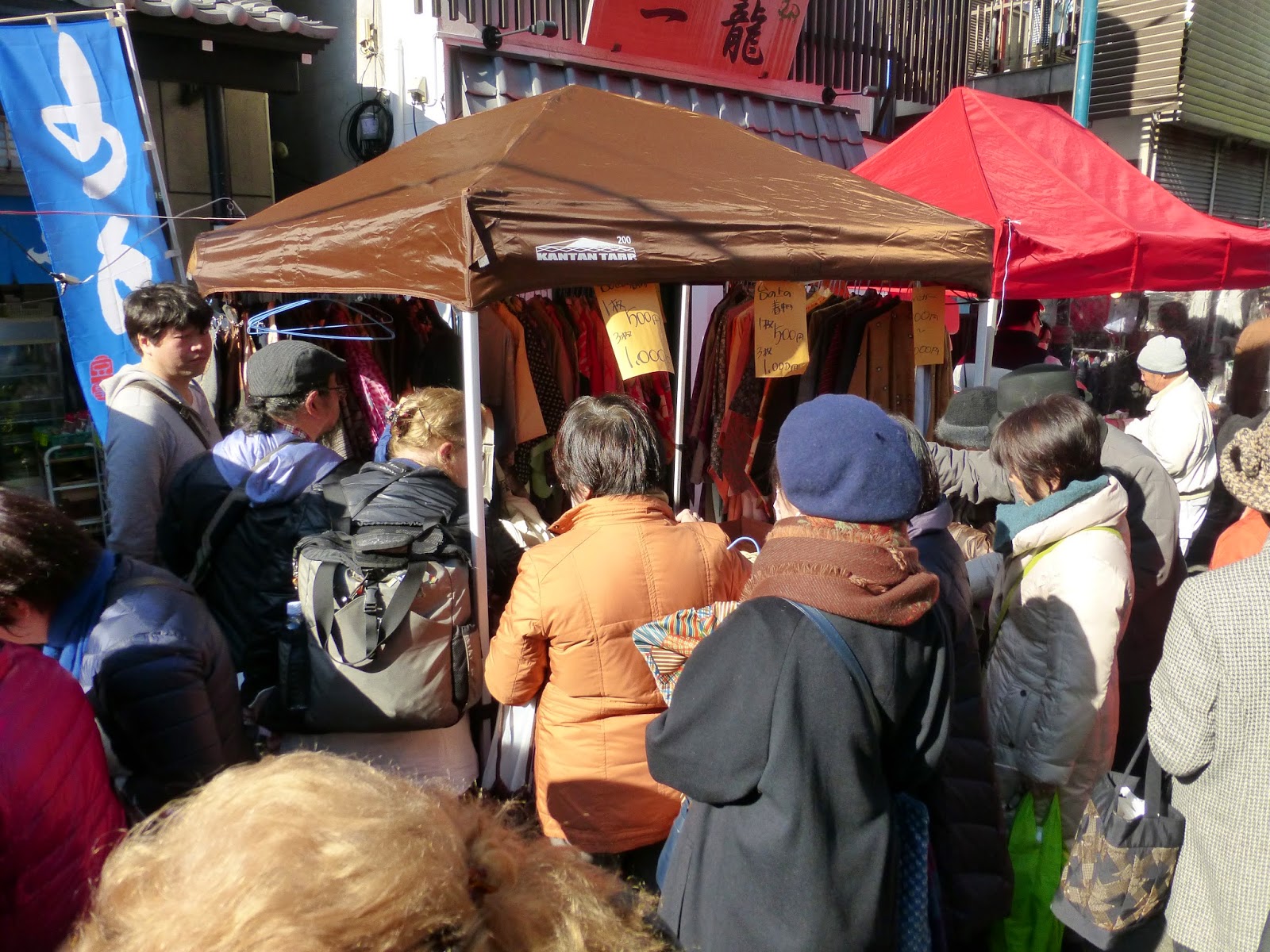 The main streets were packed, but sometimes the side streets were a little quieter.  There were several stalls selling small shinto shrines for the home. 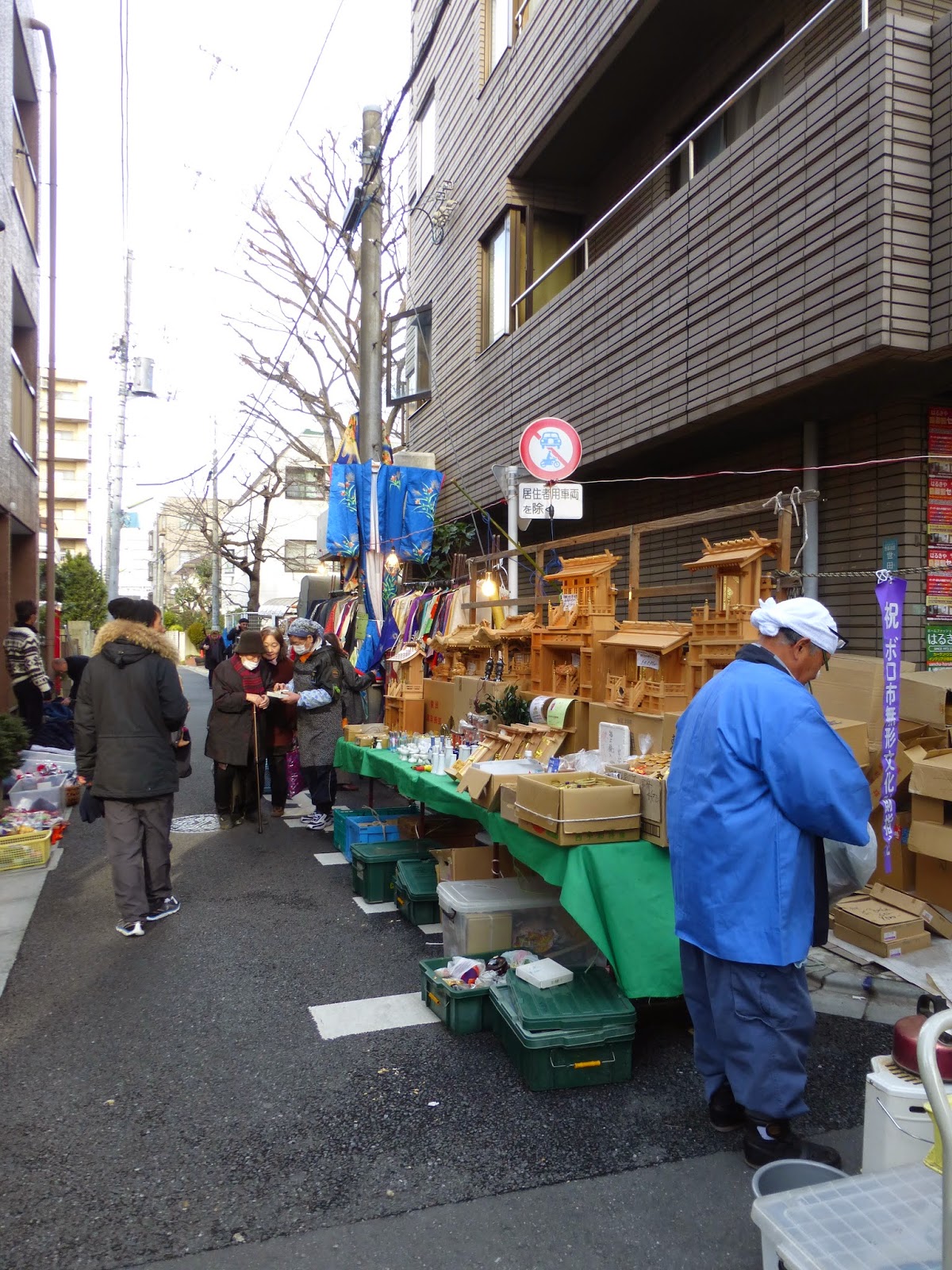 Some of the best things were just too big for us to even think about! 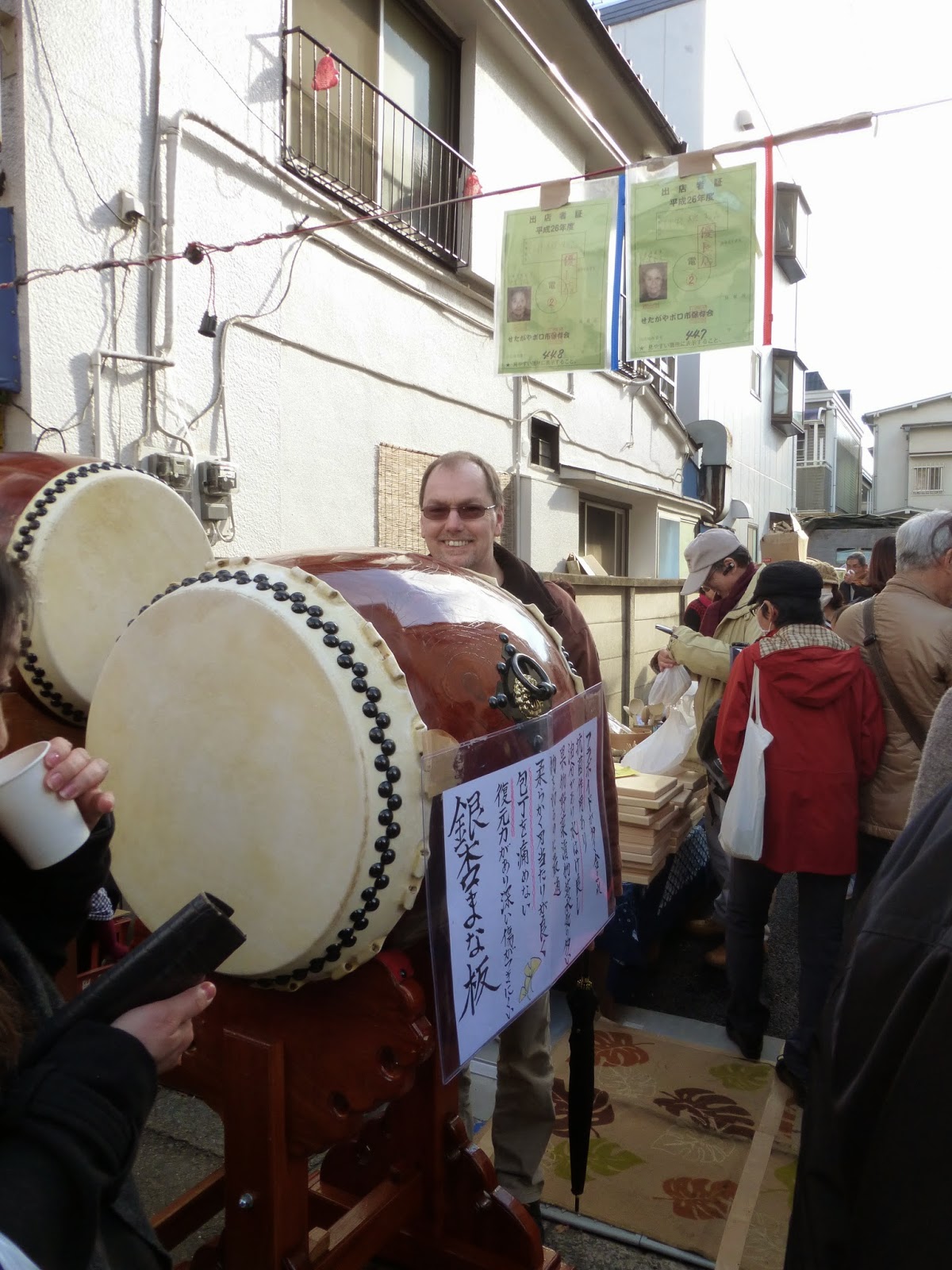 Glyn samples the traditional street food of the boroichi - yaki dango (grilled rice balls on a stick).  Yummy!  All the walking gave us an appetite. 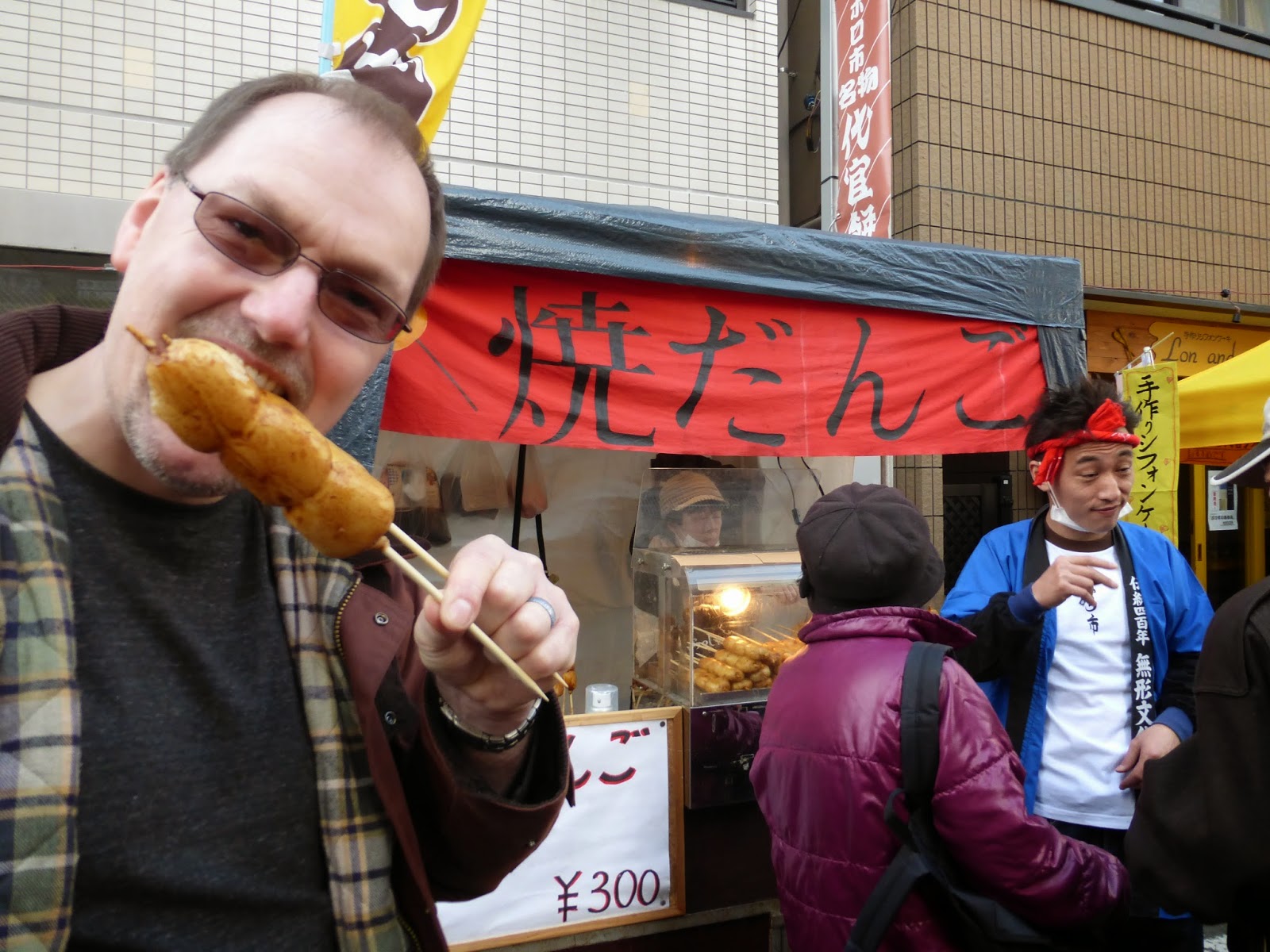 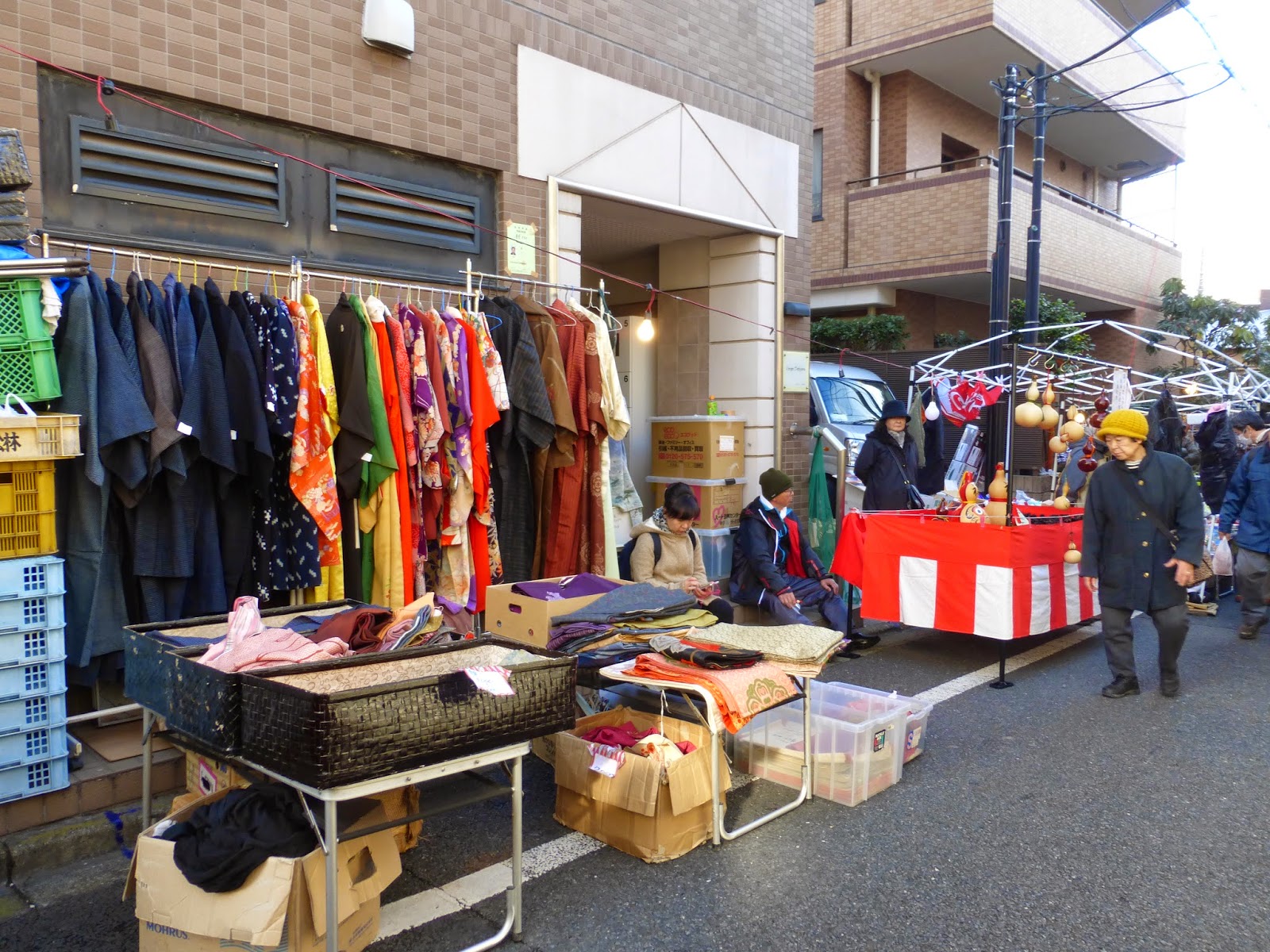 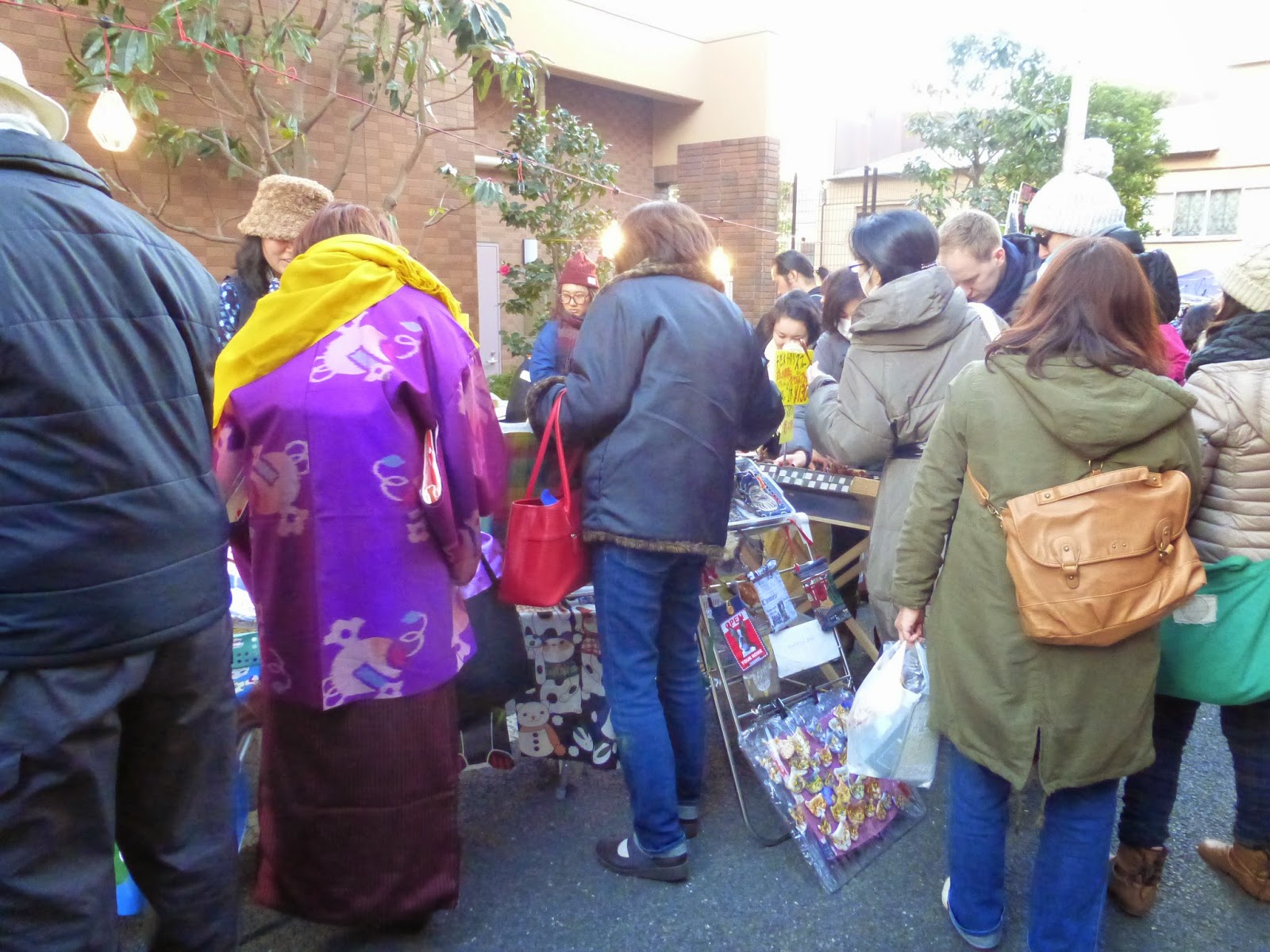 One trader had a sorihiki happi sledge hauling waistcoat from Shonai.  It didn't look all that old and the price tag was over 40,000 yen.  But he let me take a photo when I explained that I taught sashiko, which was nice of him.  A lot of the traders have 'no photography' signs, so it is best to ask. 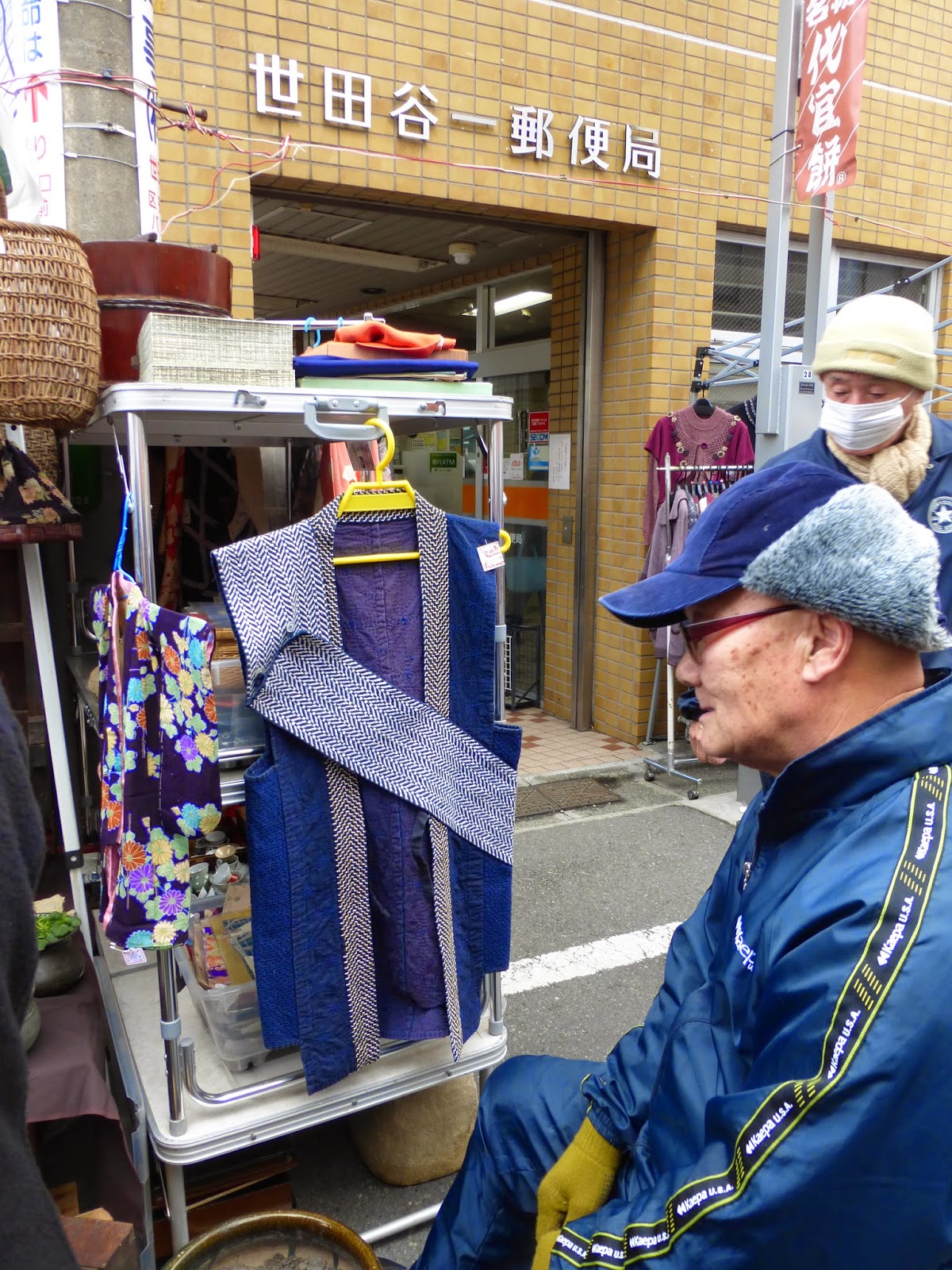 There were lots of inexpensive second hand kimono items, like cheap obijime cords. 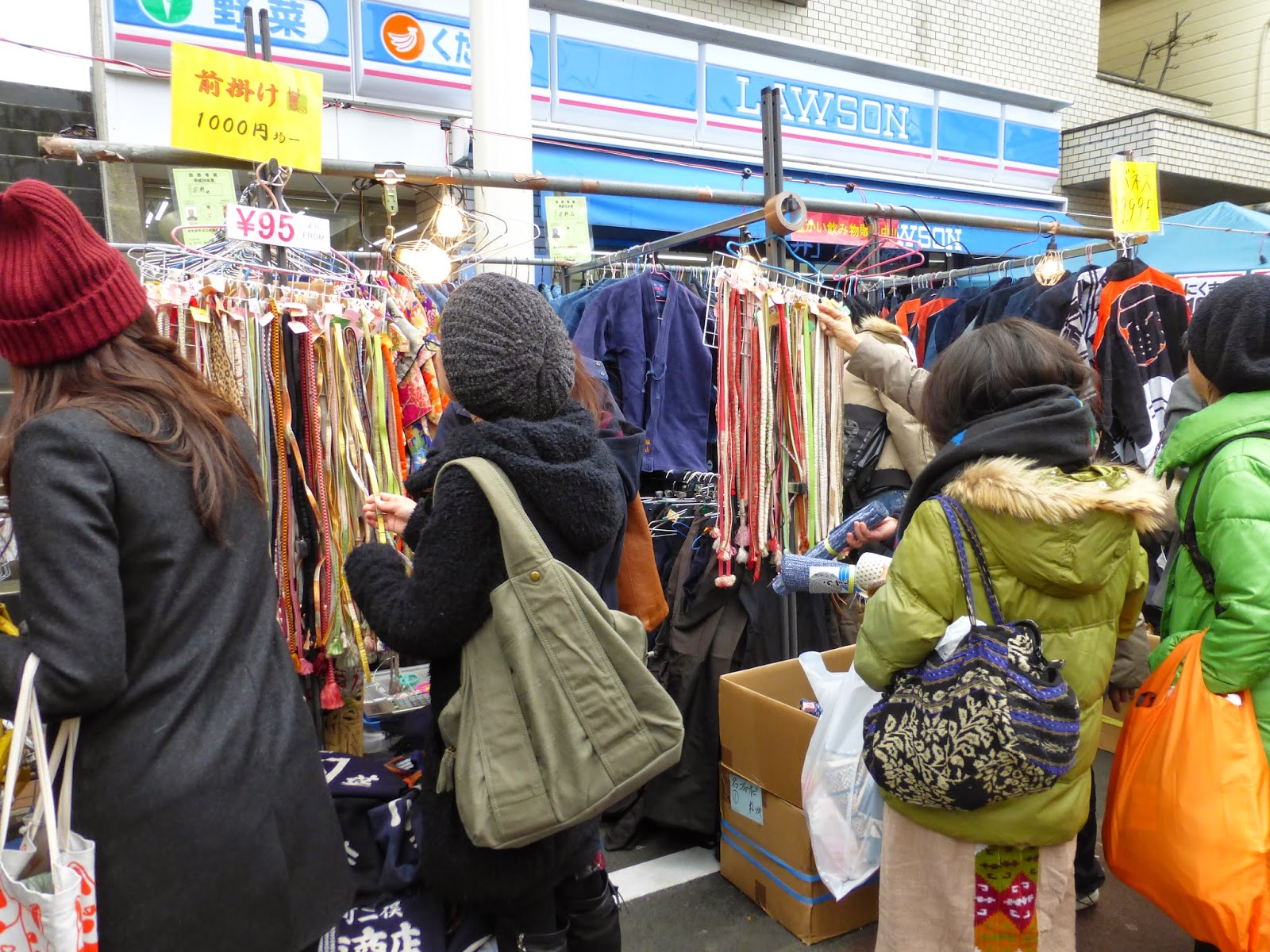 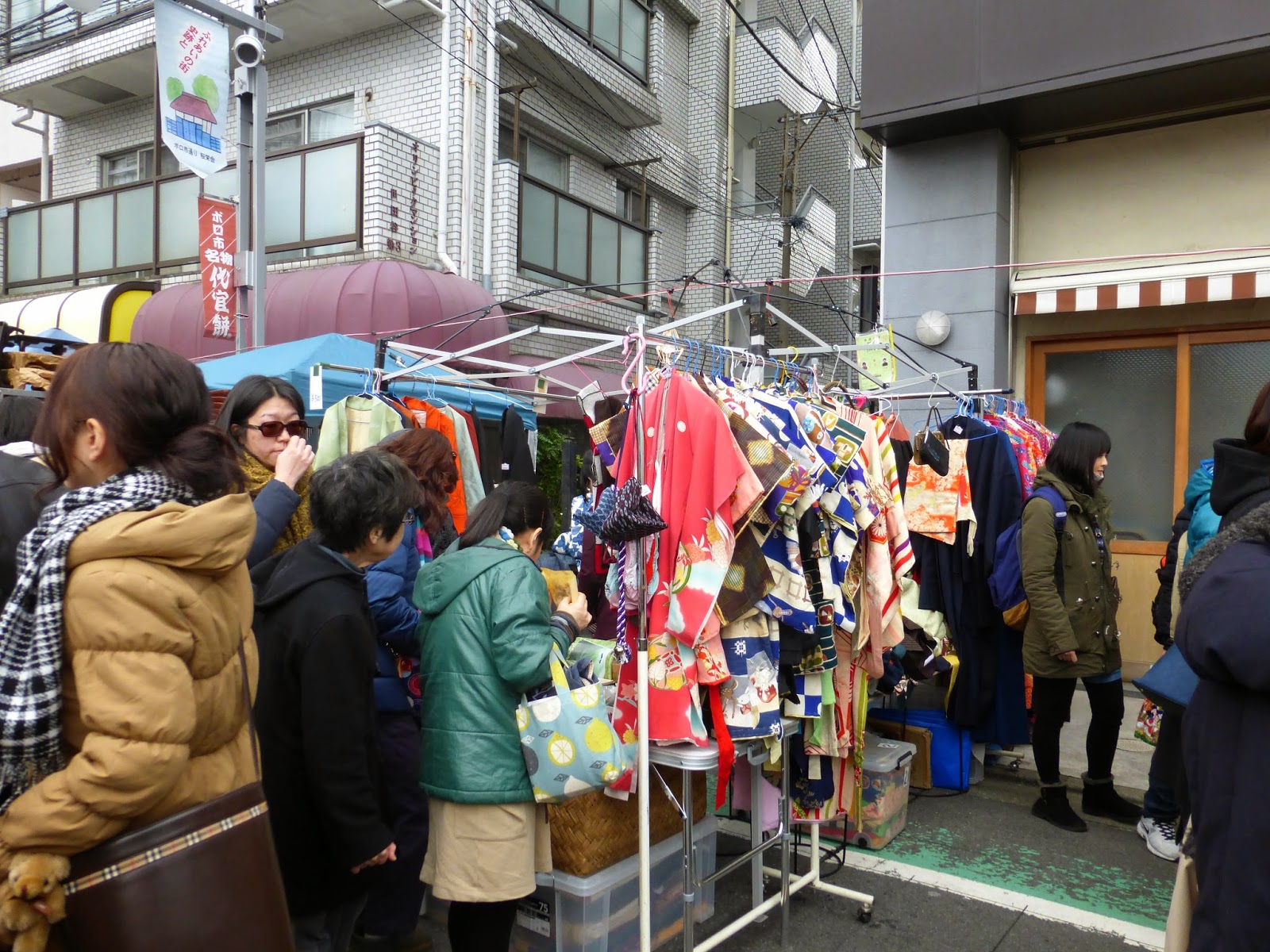 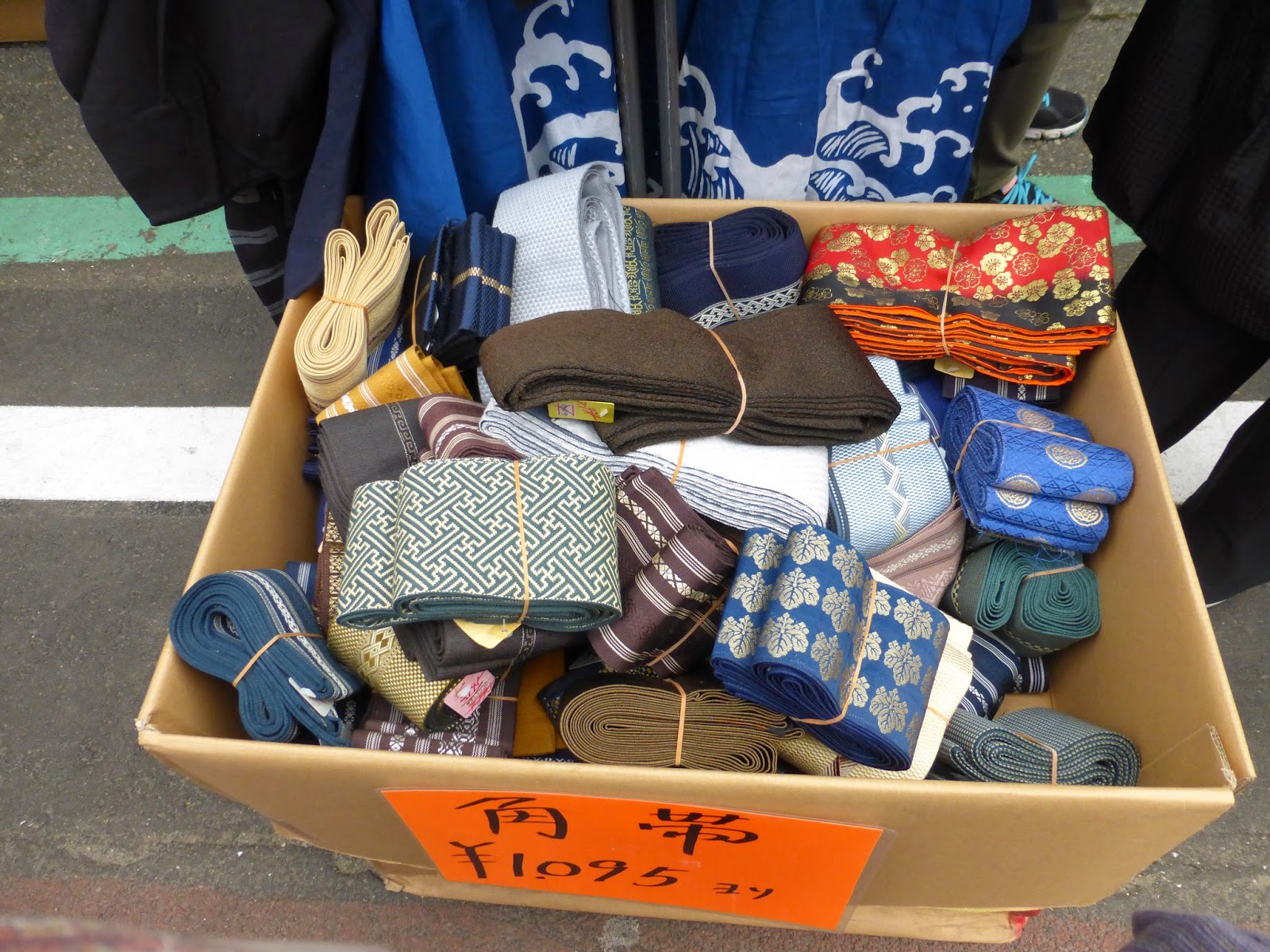 Some local shops were selling as part of the festival too, like this futon shop with racks of padded winter hanten jackets (house wear) outside. 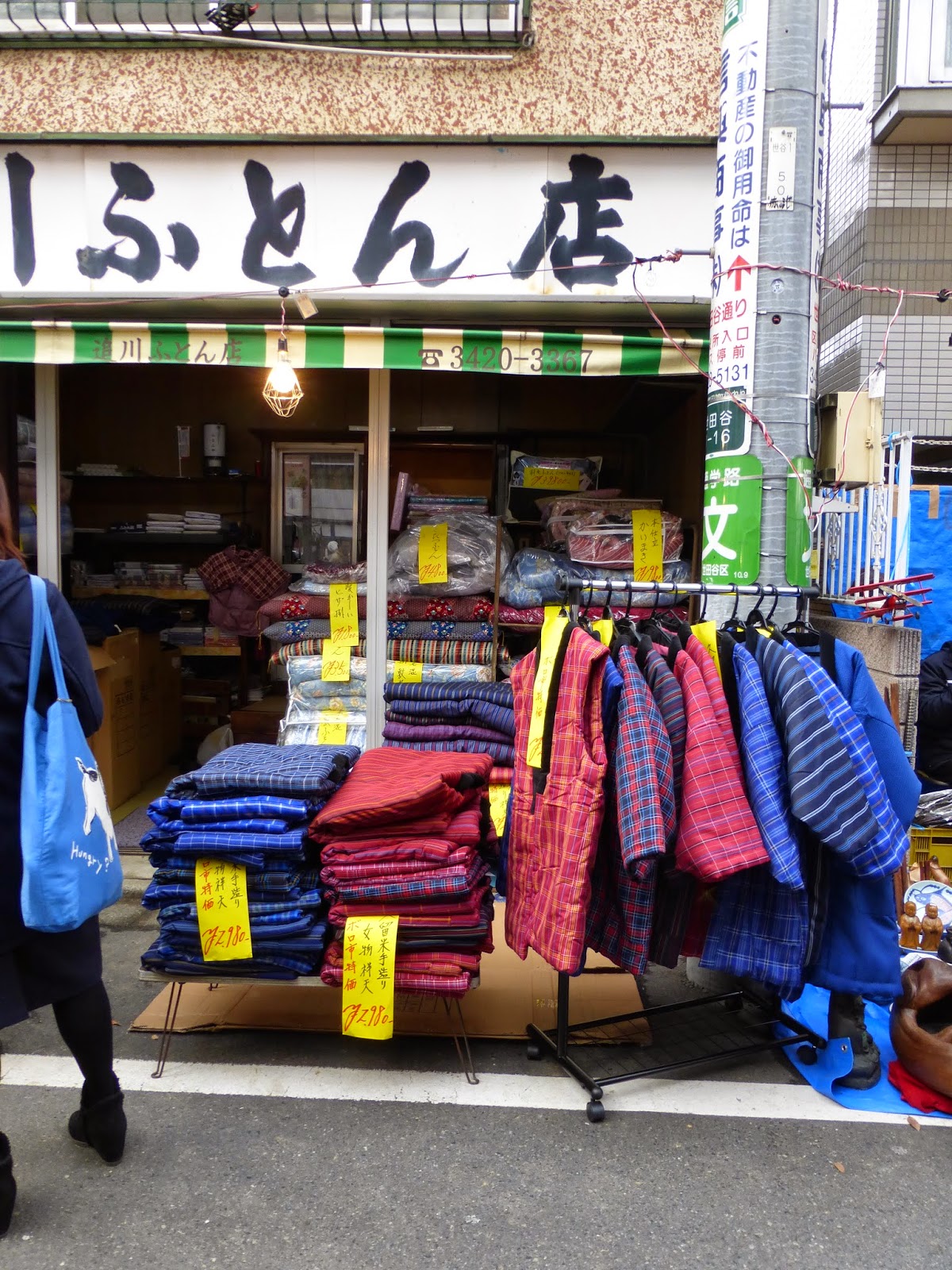 Katie bought a very good piece of zanshi ori (leftover thread weaving) on Thursday, a large and colourful rug, so we got a photo of the seller for her.  He was really pleased that she's got the rug - it was just the right thing.  He had a gorgeous large chirimen silk crepe quilt, very simple, just random squares, but it was huge, expensive and impossible to take home - like a lot of the things we liked. 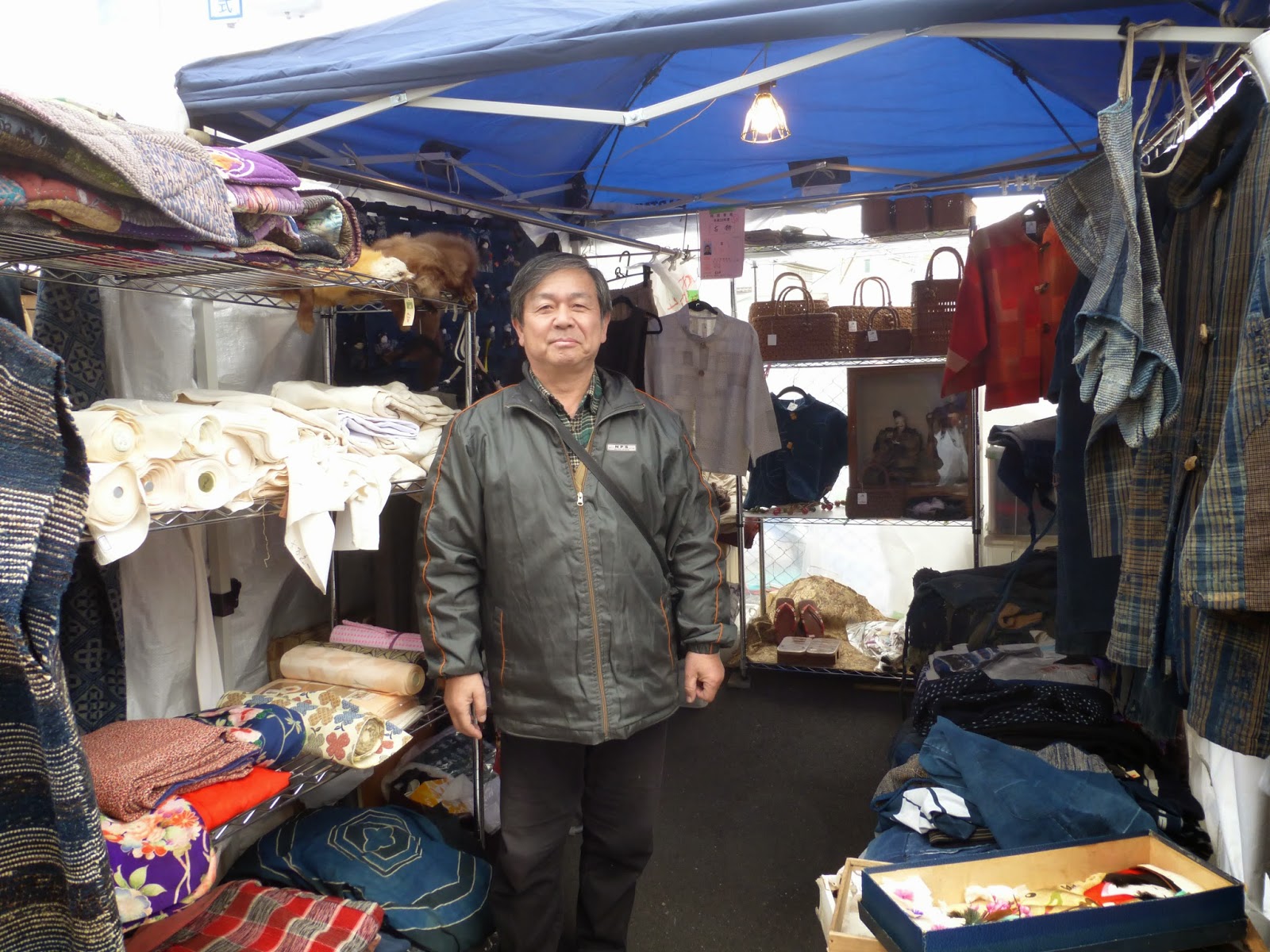 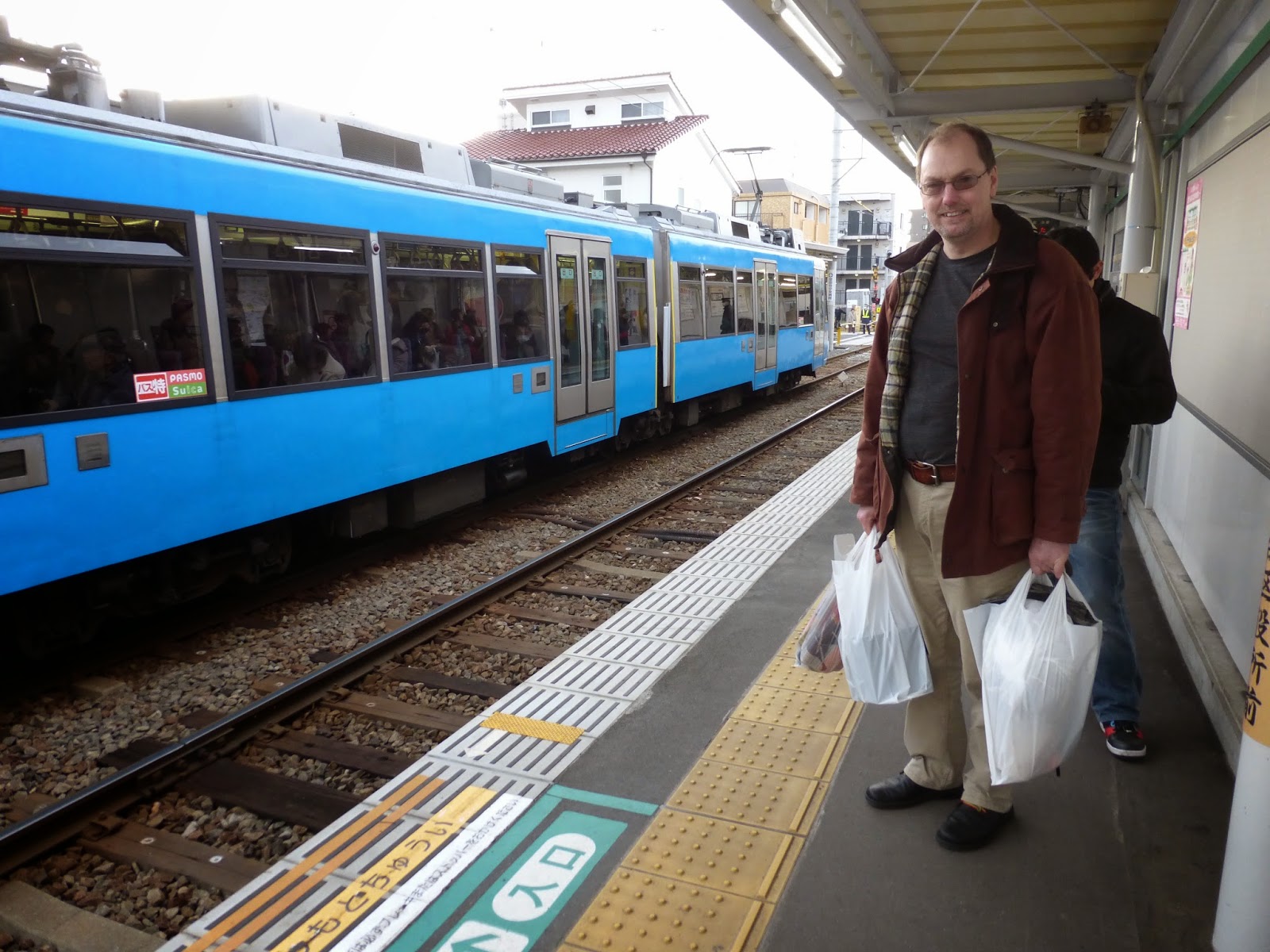 We took the Odakyu Line 'Romance Car' train out to Hakone Yumoto station and then the local Tozan bus up to Hakone-machi, along the most incredibly winding road with tight hairpin bends, climbing the whole way until we dropped down next to Lake Ashi (also known as Ashinoko or Lake Hakone) where we are staying at the Hakone Hotel. Our room is top left in the photo on the hotel link, and there are wonderful views of the lake.  More in my next post. 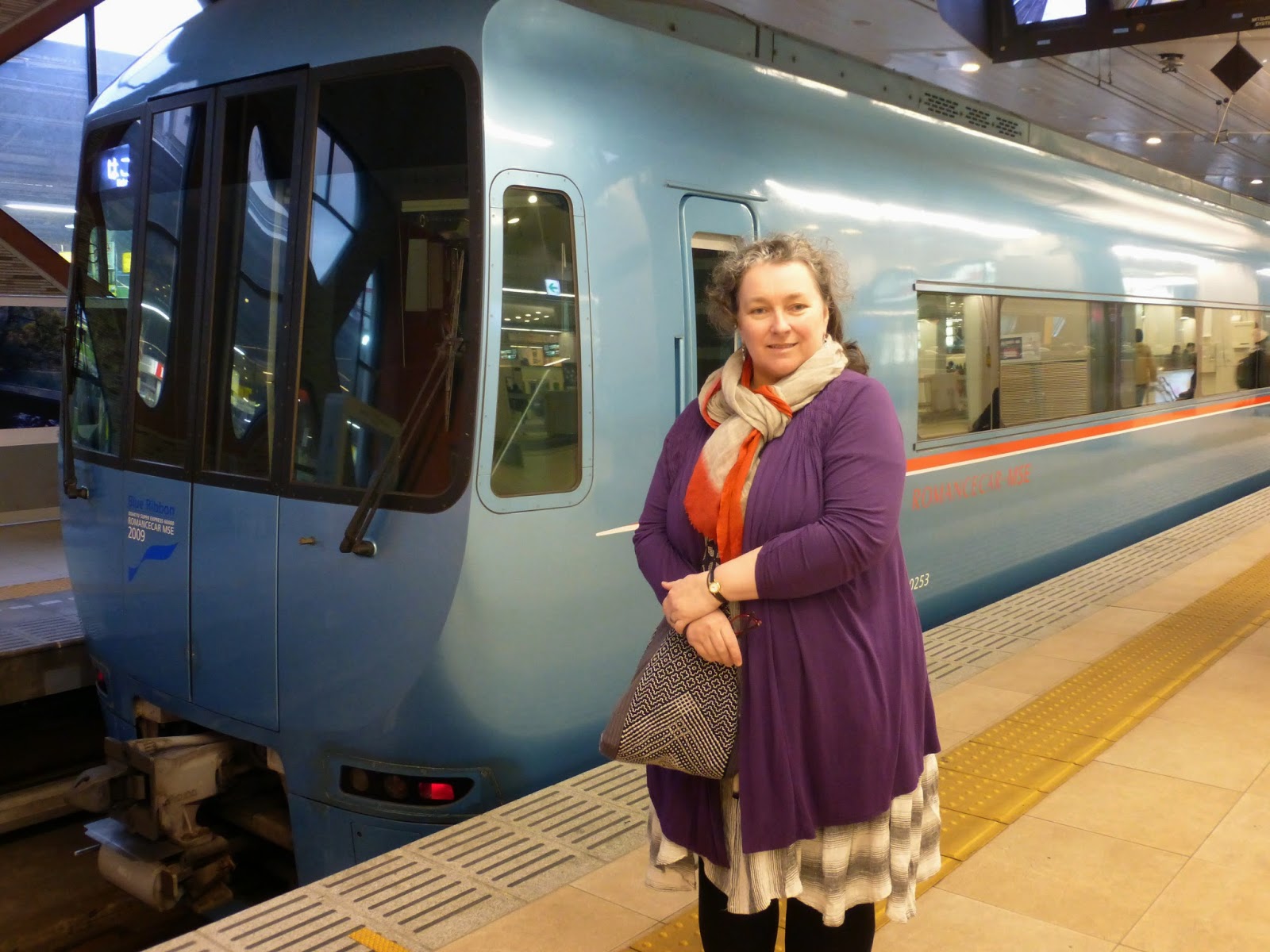 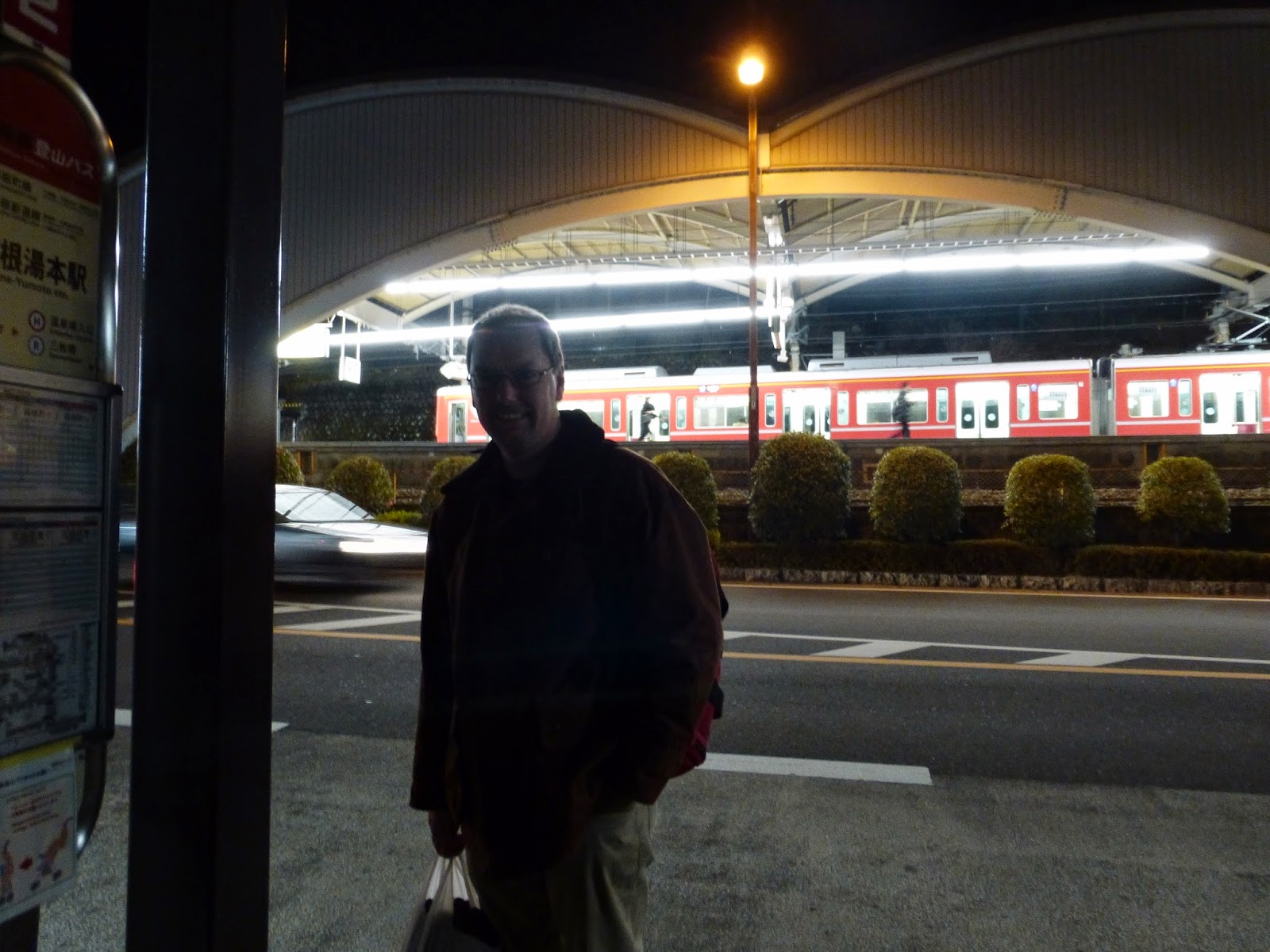 I almost forgot to add a photo of the goodies we got at Setagaya!  I was very pleased to find two bolts of indigo blue tsumugi silk, ideal for stitching a luxurious version of sashiko.  They weren't cheap but the quality is excellent and they are in really good condition.  Likewise the silk lengths in the top of the photo.  I would definitely like to go to the Boroichi another time. 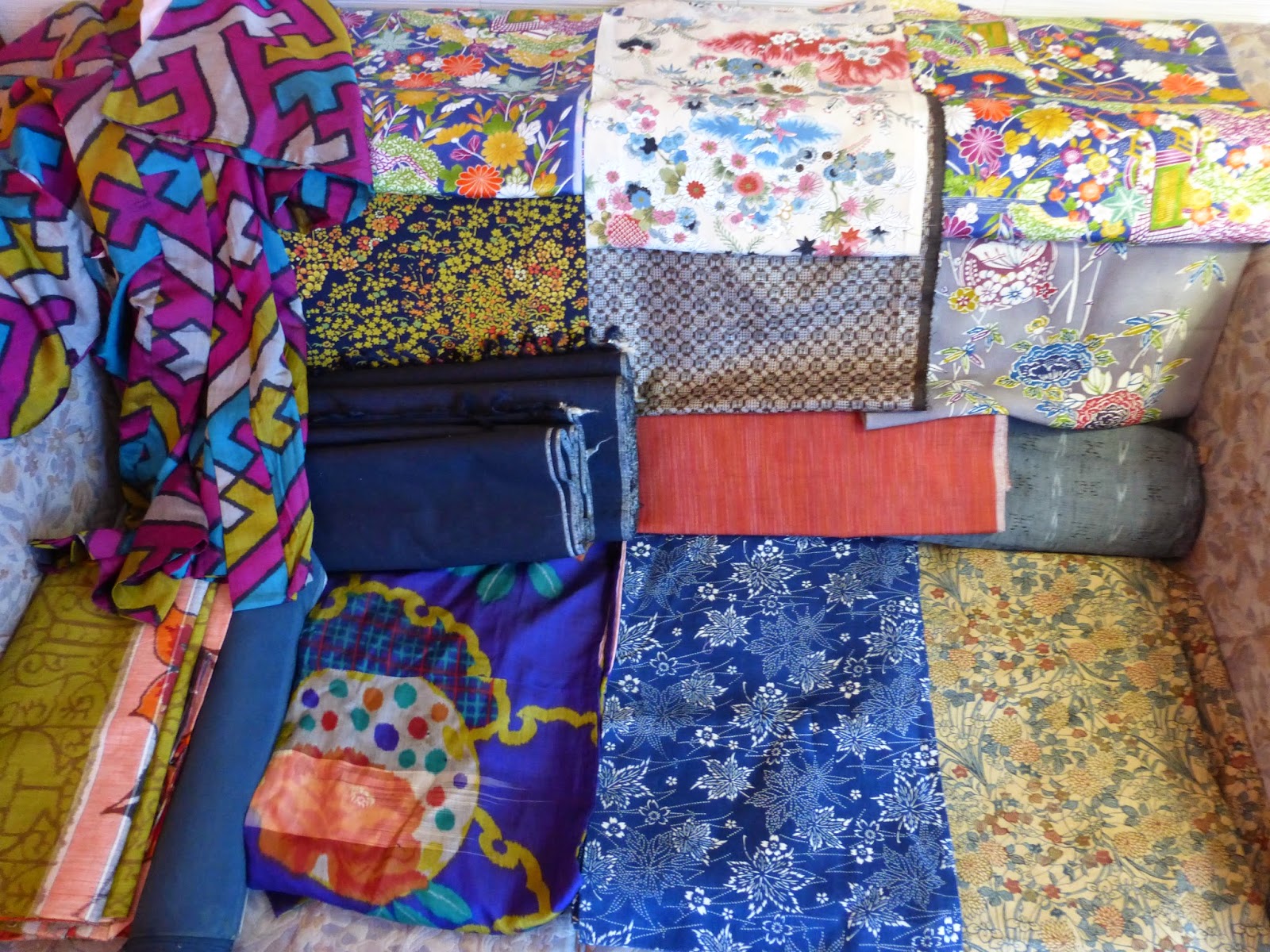