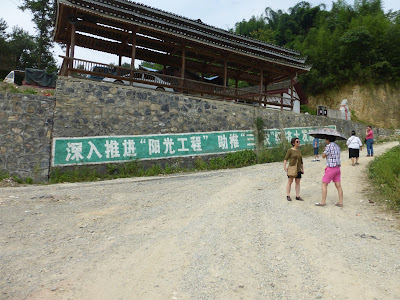 We walked over the bridge and into the village.  It was early afternoon and seemed pretty quiet, apart from the rumble of cement mixers on a few new builds. 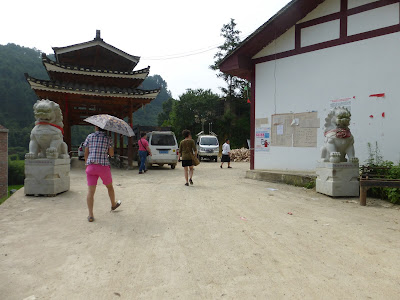 There were still a lot of traditional houses.  Beyond this point,  access was really only possible by motorbike or on foot.  The old wooden houses looked really beautiful and organic. 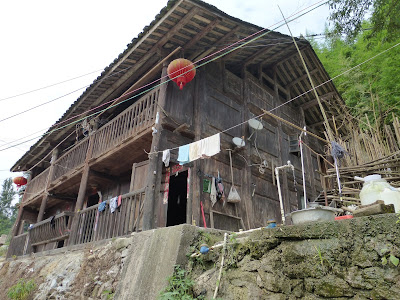 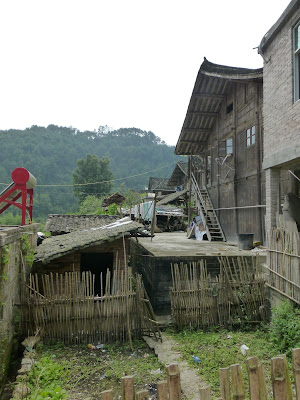 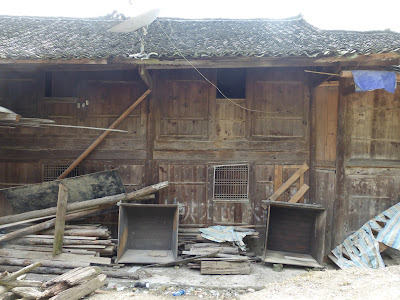 There were rice fields within the village. 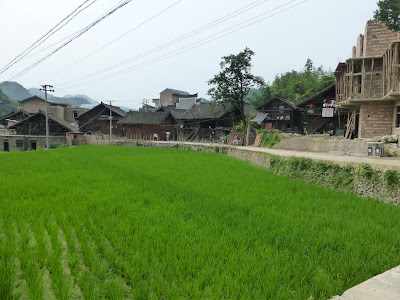 One or two houses looked like they had been restored. 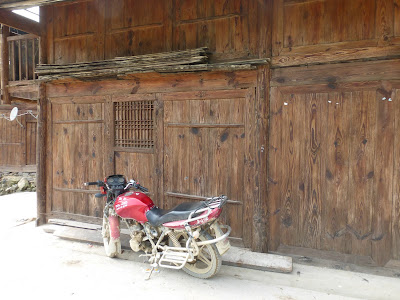 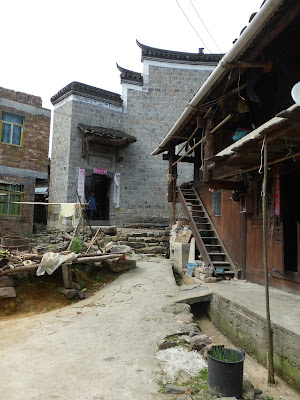 The main front rooms of the houses were partially open, with gates rather than full height doors.  The window lattices had lots of different designs. 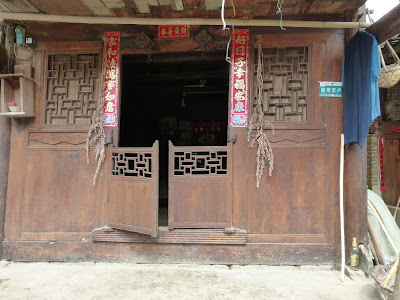 We spotted one lady stitching her embroidery just inside the door at the side of the house.  These houses seem to have a semi-outdoor area, rather like old Japanese town houses, which reaches from front to back and has the original cooking area in it. 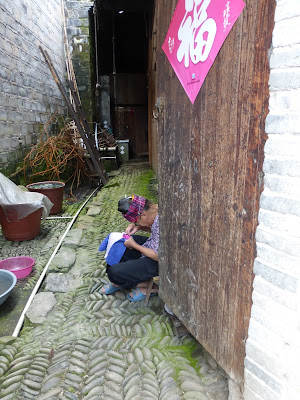 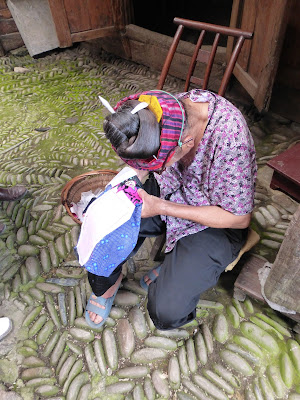 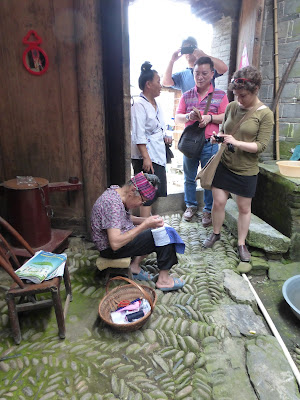 Ornate pebble mosaics are a feature in Miao domestic architecture.  The design of this one is the same as the Japanese shippo pattern, which came from China originally. 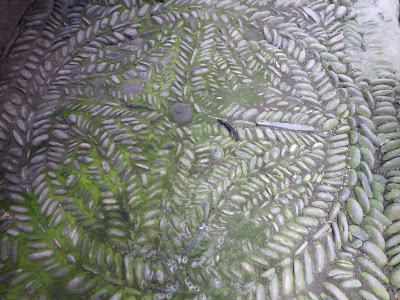 I can't read the characters, but I think the first one might be the one that means 'peace' in Japanese or 'safe' in Chinese - 安  This was the only time I saw characters combined into a window design on a house. 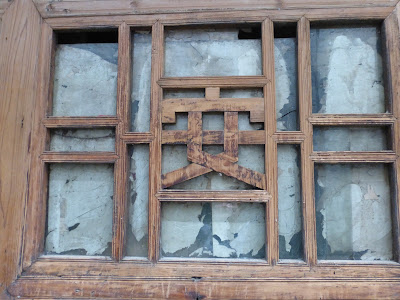 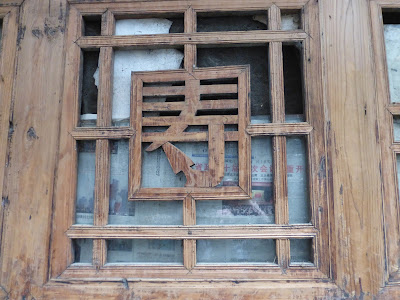 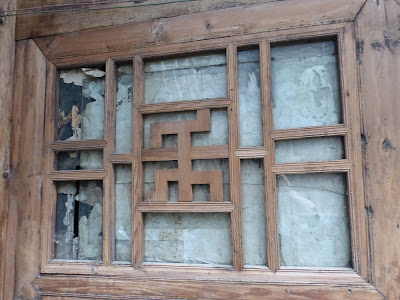 The cooking area at the back of this area (known as the doma 土間 in a Japanese house, so perhaps written with similar characters in Chinese? - it translates as 'dirt floor' from Japanese and 'between earth' from Chinese) looked like it was no longer used.  The stove is very similar to a Japanese kamado stove (this link shows the one at the Aoyama House in Yuza-machi). 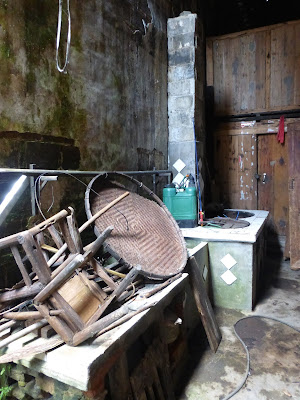 Inside the Miao house, it was very dark.  I could understand why the lady was stitching outside.  It was just too dark inside the house.  There was another stove in the back room. 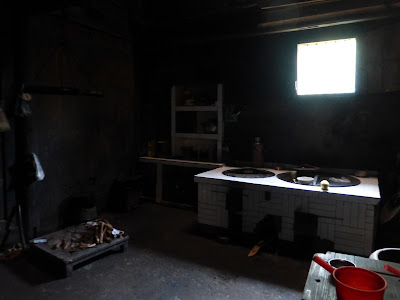 Looking back towards the doorway where she was stitching.  Like in very old British timber frame houses, there was a raised cill to step over to come into the house, part of the wall sole plate. 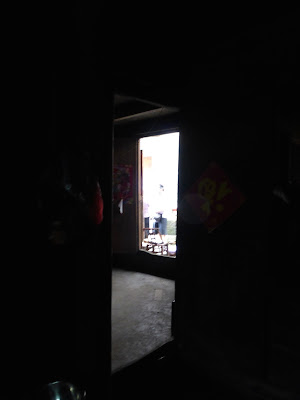 She obviously cooks in the front room now - spot the rice cooker.  Chairman Mao is in the middle picture, with (I think!) Lin Biao on the left and Zhou Enlai on the right.  If I've got anyone wrong, please let me know.  It felt like their pictures had been on the wall for a long time. 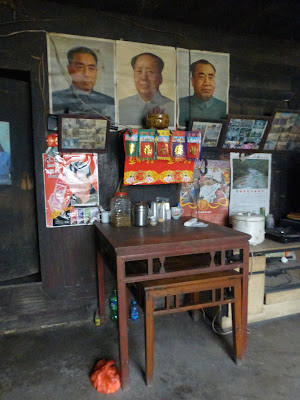 Another view across the village.  More photos of Miao textiles coming soon!