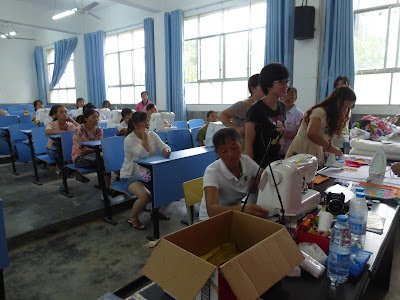 I had several projects lined up for our last day.  The first one was a potholder, with the Chinese character for 'double happiness'.  My original version was done with 1in strips and, for the metric version for the students, using 7.5mm rather than 6mm (quarter inch) seam allowances, I resized it for 3cm wide strips.  The finished strip sizes are 1/2in and 1.5cm respectively, so their potholders can have narrower borders than mine. I got them cutting strips for this the previous afternoon, when we made Courthouse Steps blocks, with just three steps each, to get them used to the narrower and more precise seam allowances. 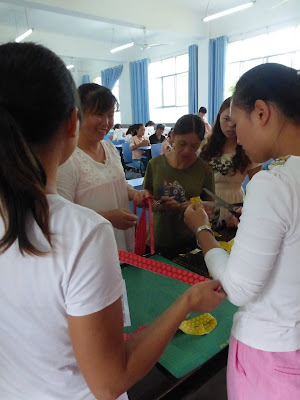 The other main project was putting together the quilt as you go Corner in the Cabin quilt with the blocks they quilted yesterday.  Each block was quilted using Aurifil thread and the fancy stitches on the Singer machines.  These were all the blocks with slightly narrow or irregular seam allowances that I thought wouldn't stand up to the tension of going on the longarm frame - the other 56 blocks will go into a quilt that Fiona at Quilt Sandwich is going to quilt for us. Angel had an idea for creating a stepped line across the quilt in one colour.  We auditioned fabric for this effect.  She also gave this quilt the name 'Almost Together', while the one I am going to assemble from the other 56 blocks will be called 'Together'.  The second quilt will be longarm quilted in the UK. 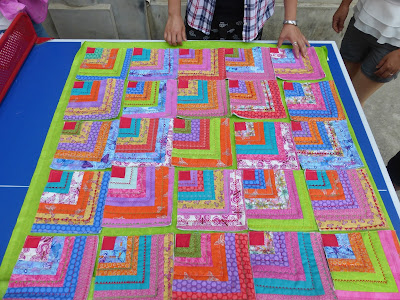 Everyone thought the orange worked better than the bright green.   The blocks had got slightly out of arrangement since the previous afternoon and I hadn't been able to print off my photo of them, so we had to arrange them again. 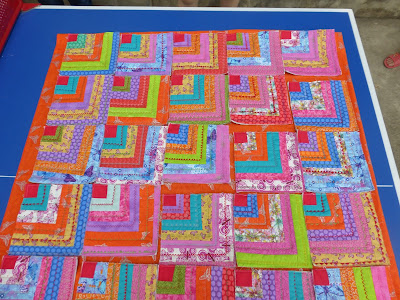 The students started adding pink strips to the front and bright green on the back. 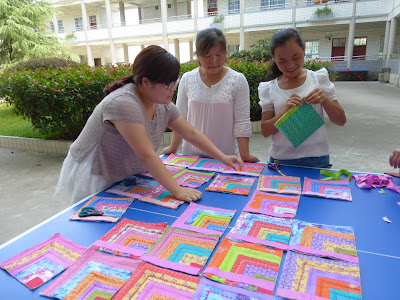 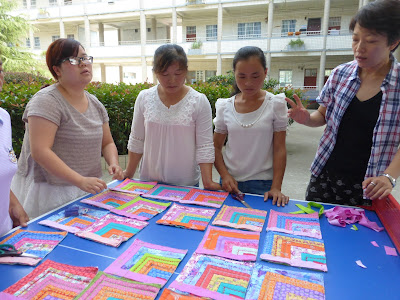 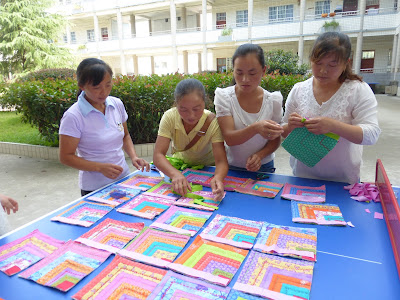 We were trying to remember which blocks went where without a photo plan, which wasn't so easy.  Perhaps inevitably, with so many people sewing, a few blocks got mixed up and our original plan for an orange zigzag step right across the quilt became more like two orange lightning flashes from either side, but it still looked good. 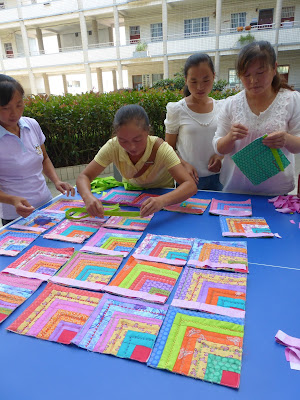 The small Courthouse Steps blocks the students made yesterday afternoon are on the right.  These came out slightly different sizes (by up to 1/2in difference) as they were still getting their seam allowances right.  Angel is going to sew these together later and make a third, smaller, quilt.  I suggested she borders them with black or another darker fabric first. 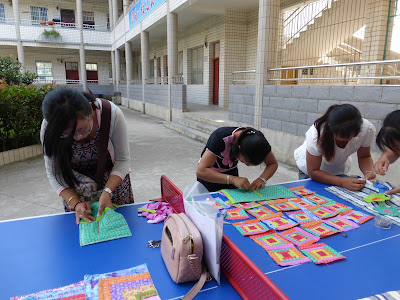 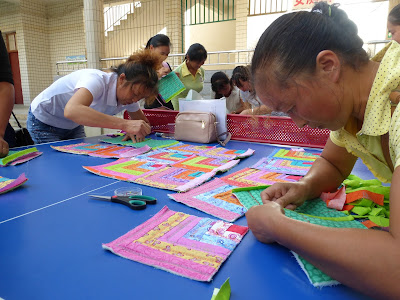 Having several projects on the go which required different activities, there was now less waiting for sewing machines. 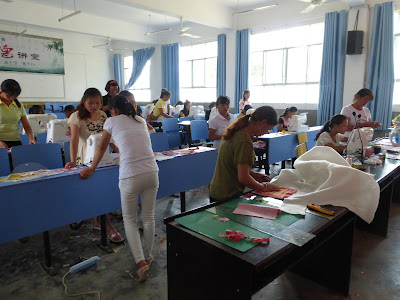 Cutting the wadding for the potholders.  We had already done 'bagging out' on the first day, so it was a small step to add wadding to the layers. 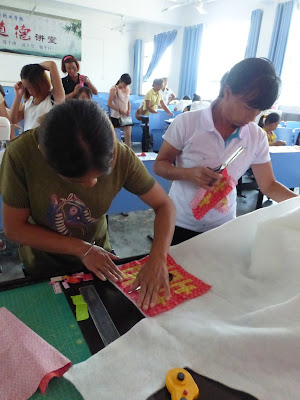 Angel came up with the idea of making a banner by linking together the hexagon flowers and appliqueing them to a length of the handwoven traditional cloth made by one of our students.  Every flower was signed by its maker, as were the Corner in the Cabin blocks. 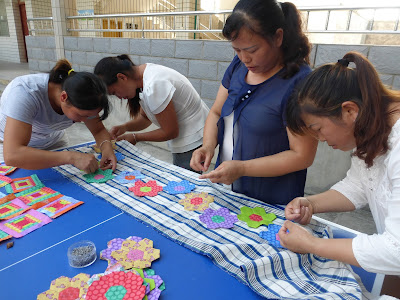 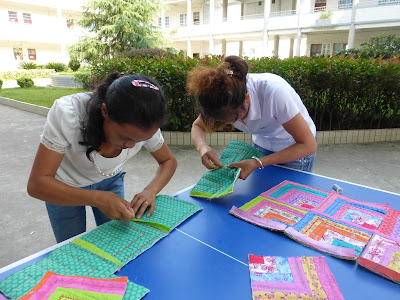 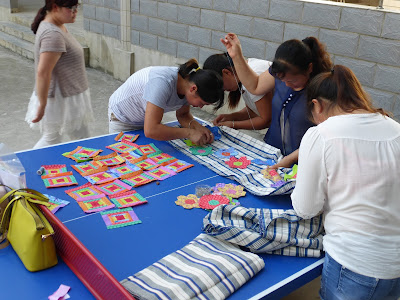 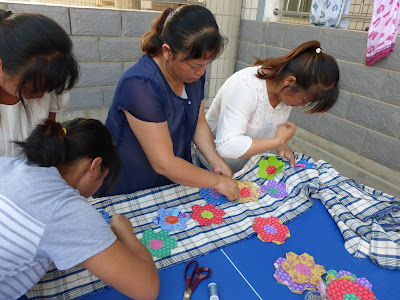 Starting to put the strips together. 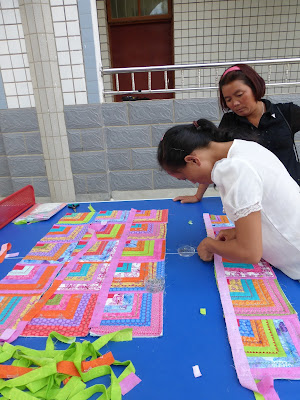 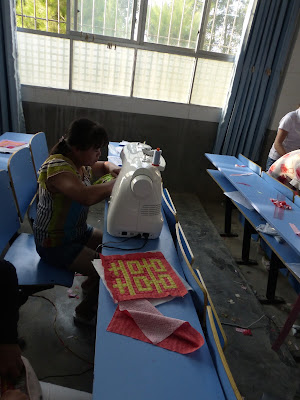 The wadding was a cotton poly mix, with a high proportion of cotton (probably an 80/20), so we could press the edges of the potholders. 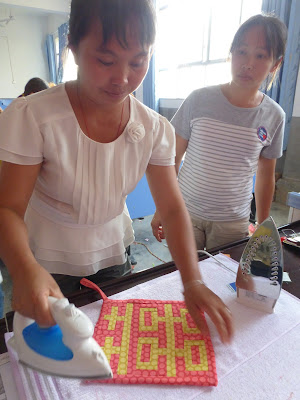 The potholders are something that would be quite saleable I think and don't take too long to make, especially if you started making them in bulk.  We chose the fabrics that were closest to mine, but it would work in other colours - we had some in pink and green.  The red and yellow were both big polka dots, which gave an interesting effect in the strips.  Mine is batik. 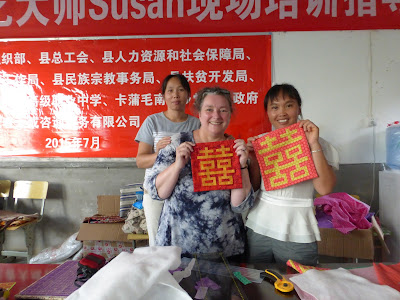 The potholders were backed in a similar red tone on tone with a zigzag. 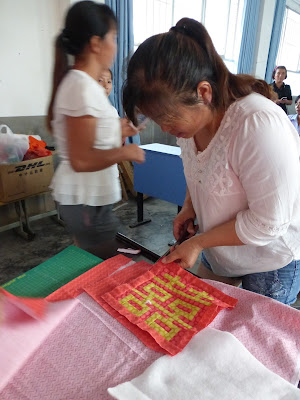 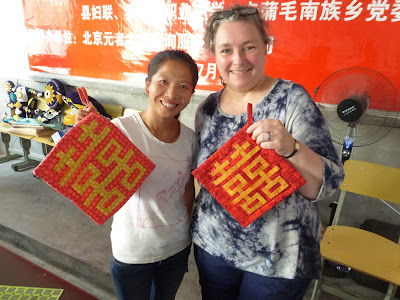 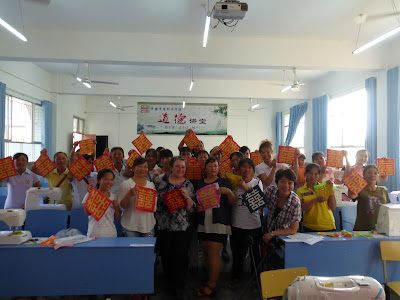 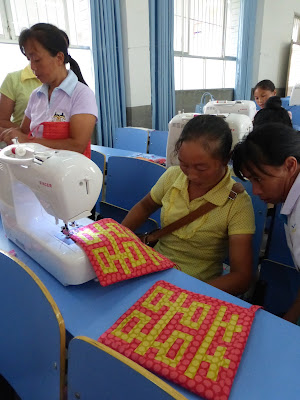 Just before the last seam was sewn - luckily we spotted that one lot of strips was upside down before it was stitched. 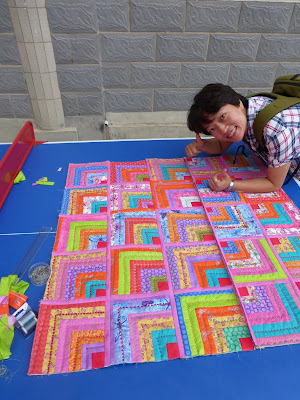 The right way up! 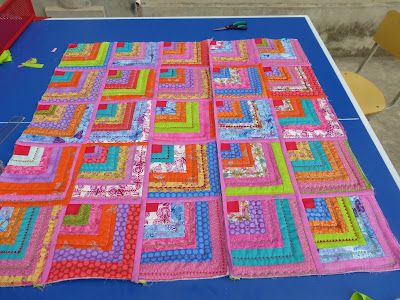 We had a very good day and everyone was so busy.  Mrs Zhang, the embroidery teacher and collector from Kaili, and Mrs Wu, a batik teacher, arrived late in the afternoon.  They would be teaching classes over the next few days.  Mrs Zhang brought my quilts back from the exhibition - she was also exhibiting there.  I was very grateful that she could collect them for me. 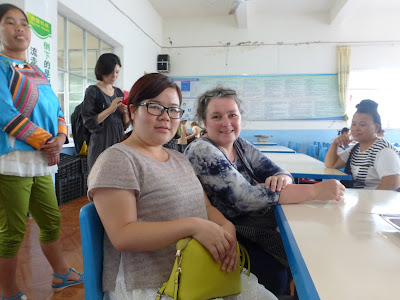 We had dinner in the student canteeen again and some of the students sang for me.  They had been singing traditional style songs in class too.  I think this is the first time I've had students singing in a patchwork class! 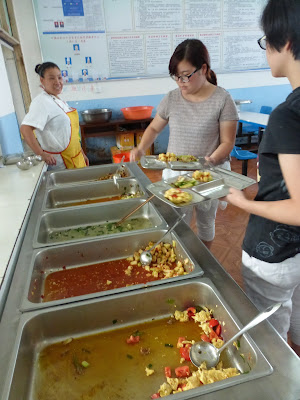 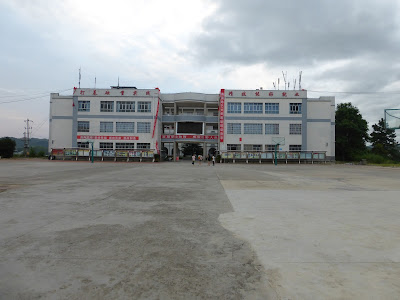 The new accommodation block, where some of the students stayed. 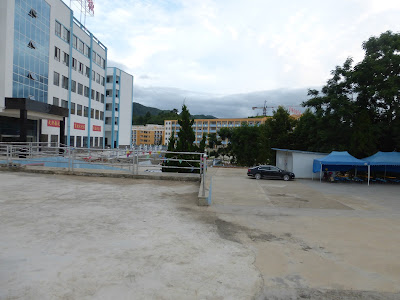 I think we achieved a lot in four days.  At the beginning, I didn't think we would be able to do so much, partly because of the student to sewing machine ratio.  From never having used sewing machines (for most of them) they learned how to do the following and built on their existing hand sewing skills -

I'm sure there's more things they learned but those were the main points.  For a four days beginner's class, where everything was translated, I think we did very well.

Angel is hoping to bring some of the ladies to the West Country Quilt Show at Bristol in November to demonstrate their traditional embroidery and I have entered the (yet to be finished!) longarmed version of their Corner in the Cabin quilt, 'Together', into the Scottish Quilt Championships in September, so you might have a chance to see their work over here.

There's still a few more posts before I leave China...
Posted by Susan Briscoe at 12:12