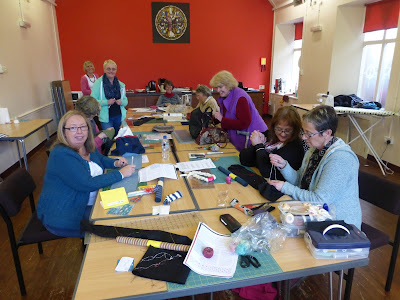 Yesterday I was at Callender for a workshop organised by Clare Workman of Thistle Threads.  We were making sashiko samplers for table runner panels, based on the one I originally designed for the Embroiderers' Guild's regional AGM weekend in Tunbridge Wells in around 2003 which later appeared in 'The Ultimate Sashiko Sourcebook'.  As we were only having a one day workshop, it was more about how the mark the patterns with a little bit of stitching technique.  I also wanted to give the students more choice of designs than we used for the original, as so many sashiko patterns can be drawn on the same starting grid.  These are some of the results.  Clare kept us supplied with home made biscuits and cake, and a lovely home made soup for lunch.  The venue is St Andrews church hall, easy to find and a good size for a workshop space. 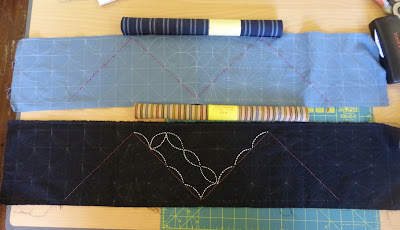 There were lots of different colour variations and one or two new patterns invented too.  Click on the photos to see the marked designs in more detail.  I'll post photos of the finished pieces when I get them. 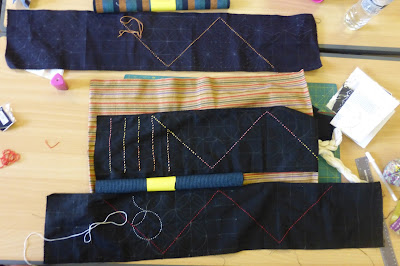 This is the original design.  I stitched two and made the other one up as a version of the Rice Sack Bag but I've used it so much, it is now very worn! The sashiko has survived very well although the black fabric faded because it was in the sun too much, but the rest of the bag has become rather worn out.  Sashiko is so tough and projects like this show how well it wears. 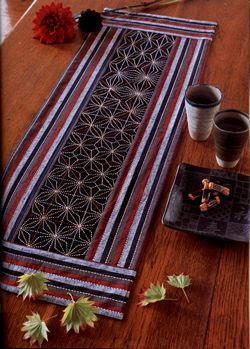