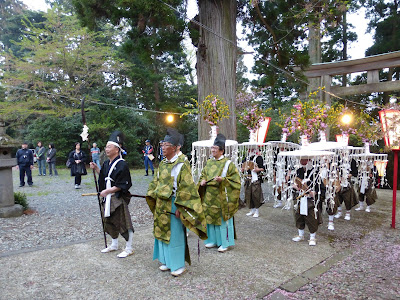 This link to information about Shinto vestments was posted on the Immortal Geisha Facebook page today - click here.  It explains why Shinto vestments have evolved along different lines from most Japanese kimono. Like Catholic and Anglican vestments which have their origins in the Court dress of the Byzantine Empire, Shinto vestments are descended from the Heian Imperial Court in Japan, which was in turn influenced by Chinese Tang Dynasty court clothing.  The photo above and the video clips were taken at Yawata, Yuza-machi, during the 'dress rehearsal' for the Hanagasa-mai (Flower Hat Dance) on Children's Day (5th May) 2014.