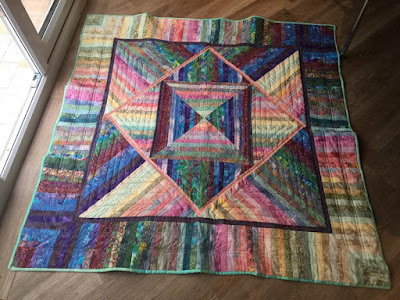 Two very different versions of my Super Strips quilt appeared on my Facebook news feed earlier today, within a few minutes of each other.  Carol Fieldhouse started hers in one of my workshops a few years ago - I'll have to dig through my workshop photos and see if I can spot which one!  It shouldn't be too difficult (I hope) as Carol has done the centre of her quilt with narrower strips, and there haven't been as many of those as the 21/2in strip centre versions. The batik fabrics make it look like a watercolour. She writes -

Howzat! A Susan Briscoe workshop, **#!!! years ago, finally quilted and bound.... it's almost all batik strips and I'm keeping it! 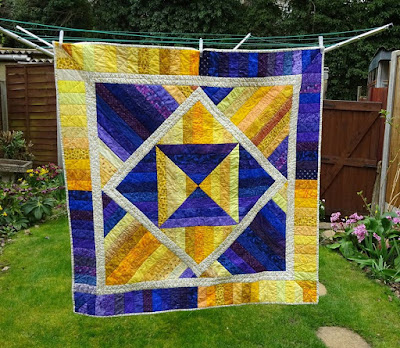 Margaret Cull posted a photo of her Super Strips on the UK Quilters United Facebook page a few minutes before.  This one uses all the same strip width and I'm guessing it was made from my pattern which appeared in Today's Quilter last year.  There is a small but subtle difference between the pattern and the workshop version, because the pattern has an uneven number of strips in the initial piecing, which results in a tiny quarter square triangle effect in the middle, whereas the workshop version has an even number, so there's no mini QST in the centre.  Margaret says -

Took me almost a year to get round to quilting it but I am very pleased with it. Going to be a gift for a friend. 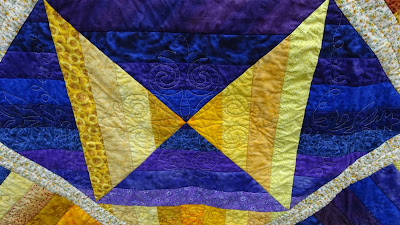 The rich gold and blue colourscheme and the scrolling quilting designs give Margaret's quilt a rather heraldic look. 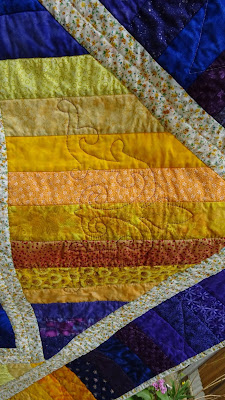 Thanks very much for permission to show your work here.

Super Strips can be made in so many different fabrics and shading variations, which I think is the mark of a versatile quilt pattern.