Textile memories of Wales in the 1980s and beyond 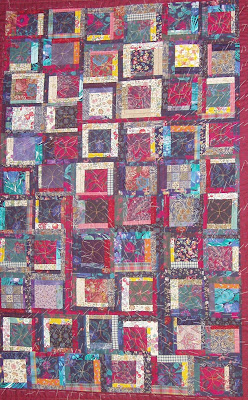 Last week, a quilting friend started an interesting topic about Welsh fabrics on Facebook in one of the quilting groups, but it now seems that the whole discussion has been deleted! So, before I forget about some of the information that was shared there, I thought a blog post (which won't disappear) might be useful.  I have added a LOT of links, so please do follow them, for even more information and photos.

I lived in mid Wales in the 1980s, going to UCW Aberystwyth in 1984 and staying on after graduation.  I had a part time clothing business in the late 1980s, and made a lot of custom clothes using Laura Ashley fabrics. Laura Ashley clothes were made in Wales at that time, with the main factory in Carno, so a lot of surplus fabric seemed to escape onto the markets.  There were two main fabric suppliers for me - a stall in Aberystwyth's market hall, which sold fabrics by the yard and also made very plain and quite distinctive pinafore dresses, and Phil Wheeler's market stall at Machynlleth and Clarach summer Sunday markets, superseded by their shop in Machynlleth which opened some time in the 1990s.  I used to get to Clarach by walking the cliff route over Constitution Hill and bringing the fabrics back in a backpack. Aberystwyth had another fabric shop, on the corner of Terrace Road and Cambrian Place, but it was more dressmaking fabrics with a lot of synthetics. There was also the very occasional foray to Aberkhan in Mostyn, North Wales (I didn't drive, so was dependent on friends going there).  Of course, once Laura Ashley stopped production in Wales, these sources of fabrics gradually dried up.

The quilt in these photos is my Lulea Log Cabin, where I used up the scraps left over from making baggy trousers out of these fabrics and mixed in other scrap bag materials, including some Liberty fabrics.  The trousers were very much 'one size fits most' and had elasticated waists and pleats at the ankle.  I sold them at a craft co-operative called Chapel Crafts at Aberporth and also took stalls at the Aberystwyth Christmas Crafts fairs a few times.  Somewhere I have a lot of 35mm prints of these places and will eventually find them and post them - in another blog post I think. The quilt border is Laura Ashley - a kind of twill woven brushed cotton that they produced a lot in the 1980s - as are the very dark, rich prints in the patchwork.  Deep greens, turquoises, burgundy and cerise pinks were very much in fashion back then.  I wish I could buy those fabrics now! 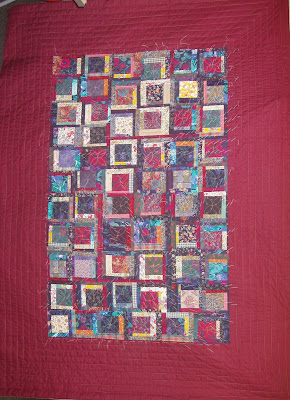 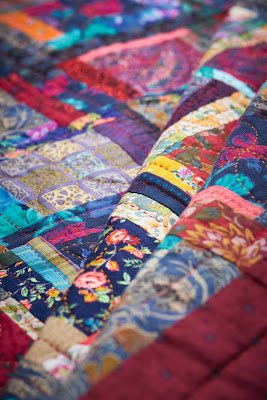 The question that started off the blog post was about whether there were any cotton mills left in Wales.  As far as I know, there was never a Welsh cotton weaving industry - the Welsh product was wool and, in the nineteenth century, there were still many small mills working in relatively isolated spots in the country.  Wales doesn't have the easiest road network in the West and a lot of it was never well linked by railways either, so I guess although the climate would have been good for cotton (high humidity, like Lancashire), getting the raw materials in and the finished product out wouldn't have been practical logistically.

I learned a lot about Welsh textiles from various sources when I lived in Aber, although I never made any kind of formal study of the subject.  We had collections like that at Ceredigion Museum on our doorstep (literally, as I once lived just along the road from the Museum!) and I also used to visit the famous collection that was displayed in the large room across the top of Aberystwyth railway station (the part that is now the toilets for the Wetherspoons pub there).  This collection belonged to Mrs Evans, who also displayed a lot of it in several corner shop windows in the High Street/old town area between the castle and the harbour.  These shop windows were set up to look like displays from the turn of the last century.  She collected anything and everything of local interest, and the main exhibition was very hands on - you could touch anything and I think you could even try some of the clothes on.  She had a circular shop rail that was full of Welsh flannel skirts.  After she died and the exhibition was closed (and the front of the railway station became a pub), I heard that her collection had gone to Ceredigion Museum.

The Museum has a large collection of Welsh quilts, and some of them can now be seen online.   This 'baskets' quilt is probably one of the most famous, and has been shown in several exhibitions - here it is at the Welsh Quilt Centre in Lampeter.  It also features in Mary Jenkins and Clare Claridge's book 'Making Welsh Quilts' (the Welsh Quilt Centre had some hardback copies for sale when we visited last year, so it is worth checking with them first if you want a copy). 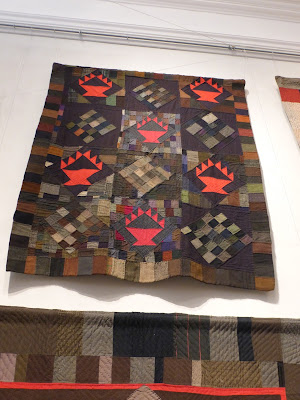 My main reference book on Welsh Textiles is 'The Textiles of Wales'.  Highly recommended, although the price seems to have gone a bit on the high side.  I bought my copy when it was first published. 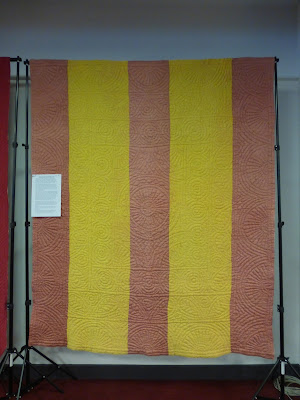 I still don't own a Welsh quilt.  The strippy and wholecloth in these photos was shown at the Quilters Guild of the British Isles (QGBI) AGM and conference weekend at Harrogate a few years ago.  The quilting designs are very distinctive and the strippy, which belongs to Carolyn Gibbs, seems to have a cotton filling rather than wool (more info here).  Welsh strippies typically have the quilting patterns going across the piecing, not following the strips as would be the case with North Country quilts. 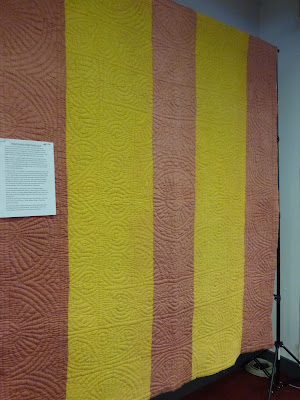 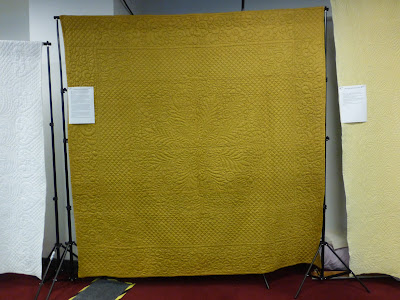 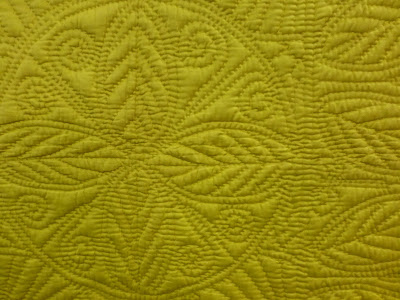 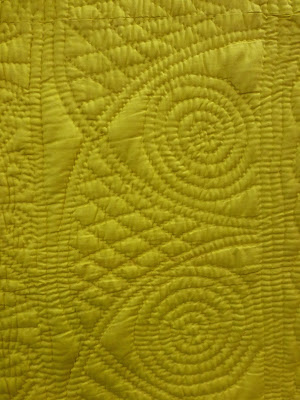 I missed a chance of buying a really lovely Turkey Red paisley Welsh wholecloth when I was a student and have regretted it ever since!  It was in the window of Oxfam in Aber, the shop was closed and I was leaving for the Christmas holidays very early the following morning.  I still don't know why I didn't put a cheque in an envelope through the letterbox and ask them to keep it for me until New Year!  There were many interesting textiles that used to pass through the charity shops then, including a lot of Welsh double weave blankets, which are now quite expensive to buy.  There was also a lot of clothing and accessories made from double weave, which went for peanuts then.  It was definitely the best time to be collecting.  These fabrics are still woven at Melin Tregwynt, one of the last remaining Welsh woollen mills.

If you are interested in Welsh quilting, have a look at Pippa Moss's blog Welsh Quilts.  Be prepared for a long visit!  This quilt from her collection was made in Aberystwyth. 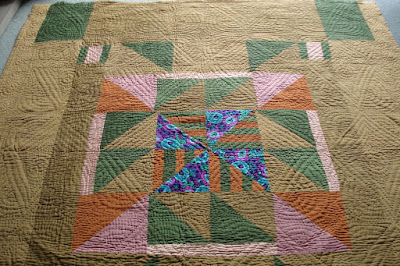 St Fagans also has an excellent collection of Welsh quilts and textiles.  Elen Phillips is the textile curator there.  The last time we visited (May 2016) work on the new galleries wasn't yet finished, but apparently there will be a permanent display of quilts.  The Wrexham tailor's patchwork shown in my second blog post about our 2013 visit is currently on display at Wrexham Museum.

Now to a couple of modern Welsh quilters who both use traditional fabrics in their work - I don't think they were mentioned in the Facebook discussion?  We met Mary Jenkins at St Fagans museum in May 2016, when she brought some of her small quilts to show members of Yuza Sashiko Guild and we had a wonderful impromptu quilt show in the chapel gallery, much to the surprise of other visitors!  Mary doesn't use any 'reproduction' quilting fabrics for her quilts and believes very strongly that quilts made now should use fabrics made now, rather than direct copies of older materials.  Of course, she has an amazing collection of Laura Ashley and Liberty fabrics dating back over the last 30 years or so on which to draw... 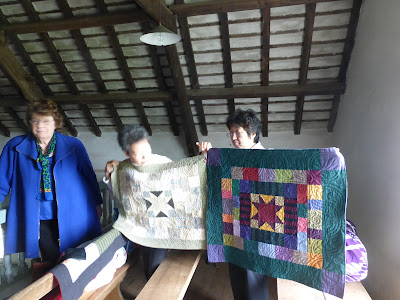 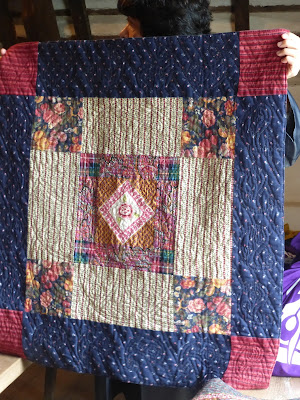 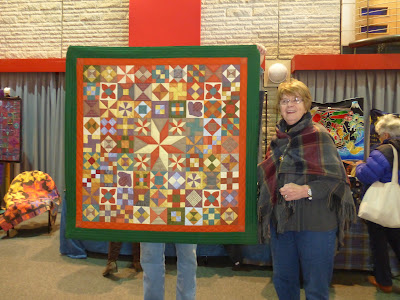 And DeAnne Hartwell-Jones, shown here with two quilts inspired by the 1718 Coverlet. 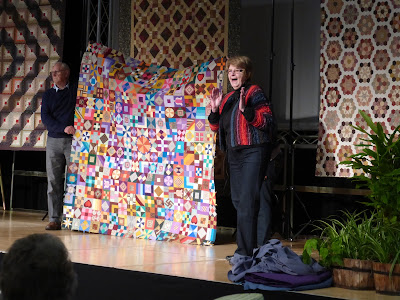 DeAnne was one of the speakers at the QGBI AGM and conference weekend in Llandudno in 2016. 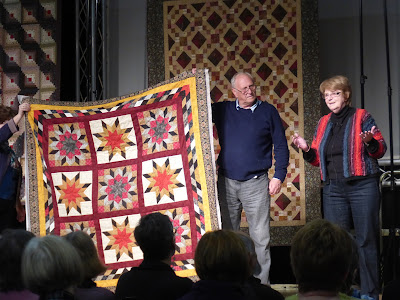 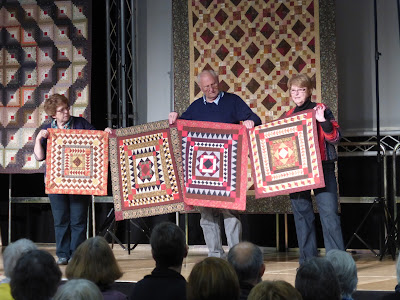 She was also our main exhibitor at Quiltfest in Llangollen in 2011.  All DeAnne's work is done by hand. More photos of her quilts here. 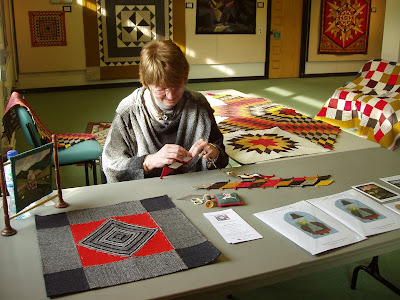 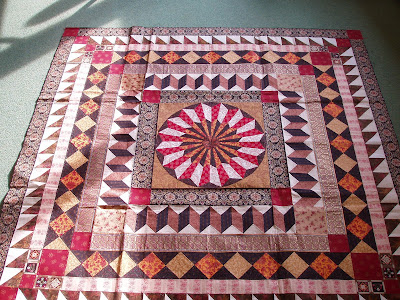 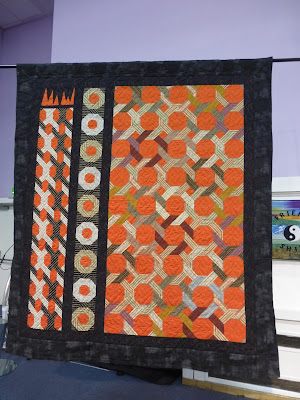 These are details of quilts she showed at the QGBI AGM in 2016, which include some of my Japanese fabrics - tsumugi striped cotton.  It makes a very good substitute for fabrics which are no longer made.  I have started a Facebook album for Japanese wool flannels I have for sale at the moment, which also made excellent substitutes for Welsh flannels - click here.  I am selling these 75cm 'double width' flannels for £16 per metre, with free postage in the UK. 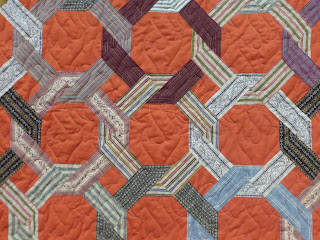 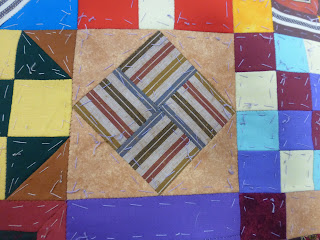 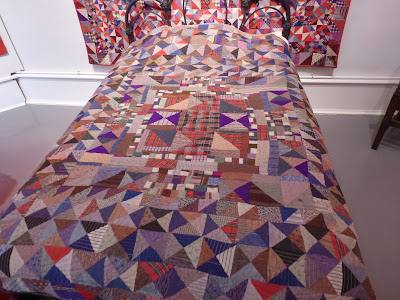 For a final look at some Welsh fabrics in detail, here are some photos from the Welsh Quilt Centre's summer exhibition 2016, 'Unforgettable'. 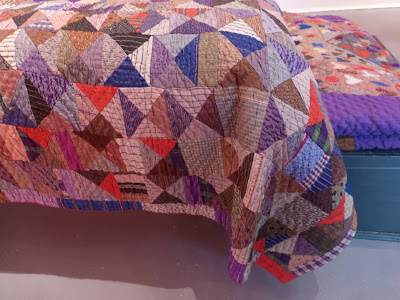 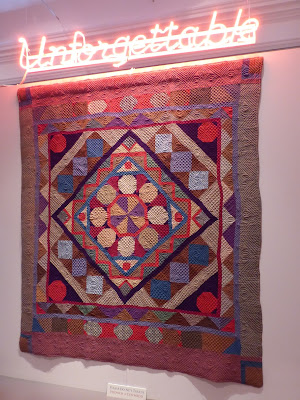 Jen Jones is a remarkable figure in Welsh textile history and has done much to help preserve and re-evaluate the quilting tradition.  There are several other posts about the Welsh Quilt Centre here. 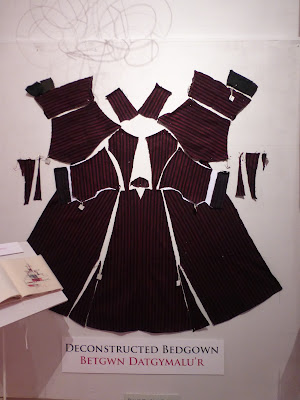 Not to forget Jen's shop! Although the quilt is mine - Dryslwyn Dreams, inspired by a quilt that she used to own. 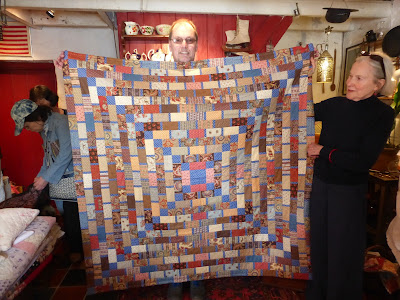