Bits and pieces - some patchwork and the chimney 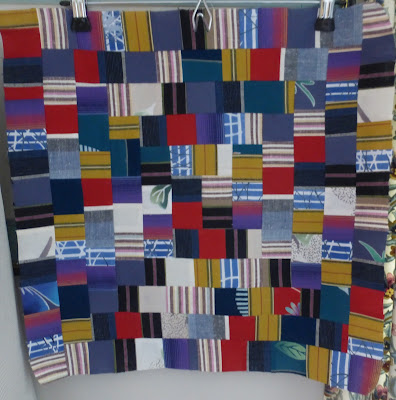 I've been tidying up in my workroom, so made this random spiral patchwork from the bits left over from the new version of Masu, which I've made with Hamamatsu striped cottons and Japanese yukata stenciled fabrics.  Here are the blocks just before I sewed the top together. 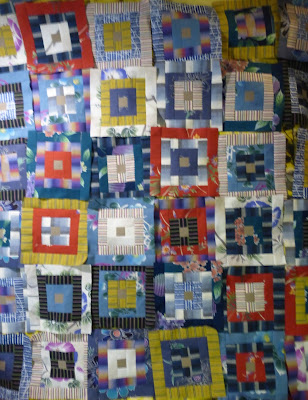 Fiona has made a green version of it - I like her quilt even more than mine! 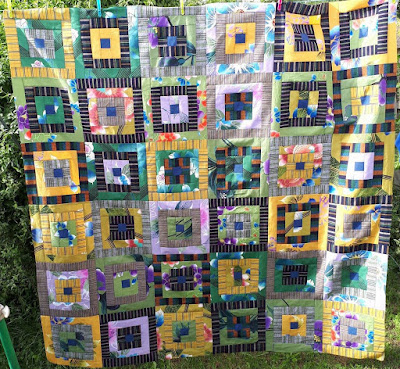 I also 'tidied up' a set of black and gold Japanese Circles and Squares blocks I made several years ago, adding a gold sashing. There's a bit of variety in the shades of gold.  It makes me think of my vintage sewing machines... 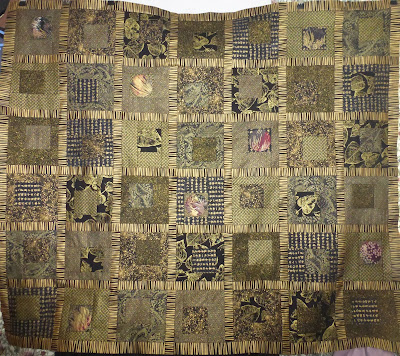 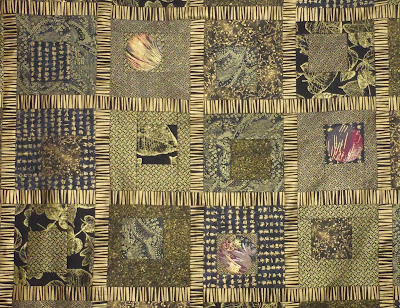 I made those blocks a few years ago.  Here's the variation on Japanese Circles and Squares I made using the leftovers, plus a bit more of the multicoloured print I used for the circles on the first block set, a Kona Bay picture panel and some oddments of other gold print fabrics.  I tacked that quilt sandwich in February 2014.... Must get it quilted soon. 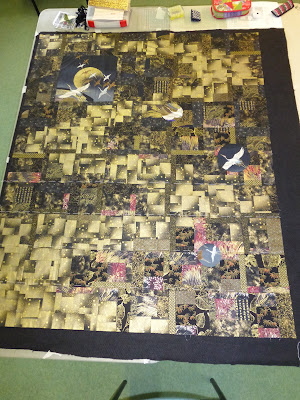 My hand quilting summer job is on this - Spinning Squares - which will be going into Today's Quilter.  It started out as a workshop but I've wanted to bring it out as a pattern for a while.  I'm hand quilting it, with a bit of big stitch thrown in. 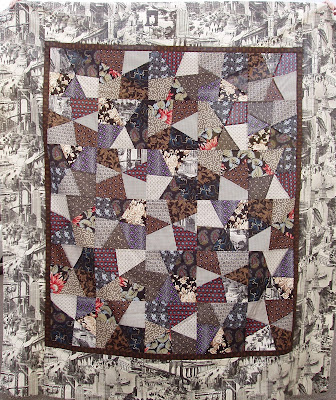 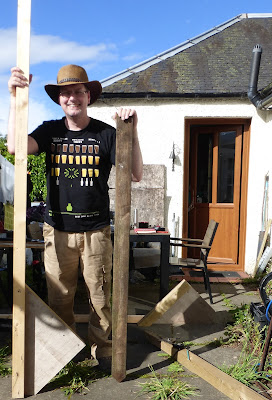 Glyn has been spending a lot of time on the roof, rebuilding our chimney stack, which we share with our neighbours.  Both the chimney pots were badly cracked and the waterproof modern cement render had been blown off the stack by frost.  We got a specially matched lime mortar mixed up from a supplier in Edinburgh last year and he has been using that to repoint and repair the stonework.  His first job was making a working platform so he's safe on the roof. 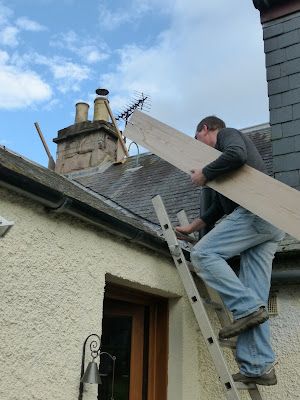 This is how to get up and down our roof - via the gully. There's a rope to hang onto now too. 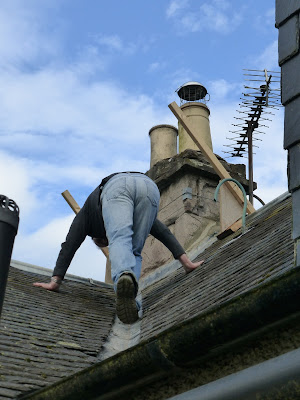 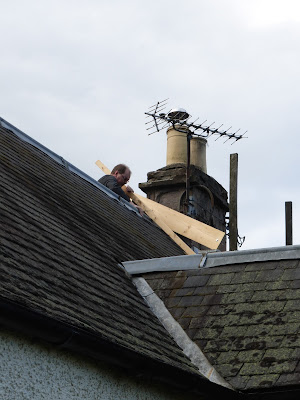 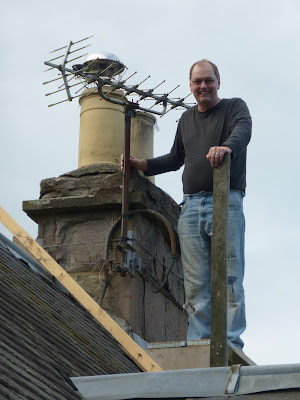 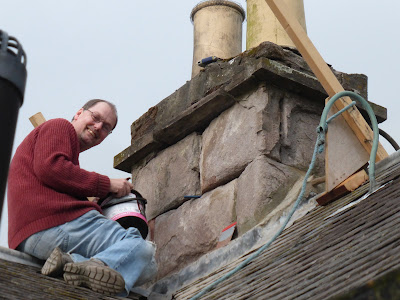 Once all the old render was off, it seemed it is mostly the weight of the stone that is keeping the chimney up there, as there's very little mortar holding it all together.

The old chimney pots have had to be removed.  Glyn found a date scratched into the cement - 1969 - so the pots probably aren't all that old.  Our is the one with the balti dish on top, to keep the crows out.  They nested inside the pot for a few years, and about 12 inches (30cm) of nest had to be removed.  We haven't been able to light a fire for a while. 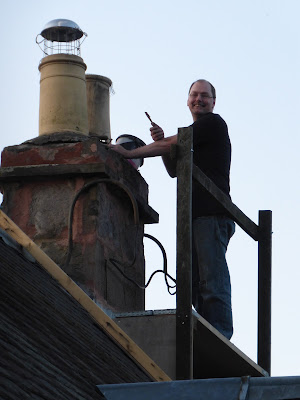 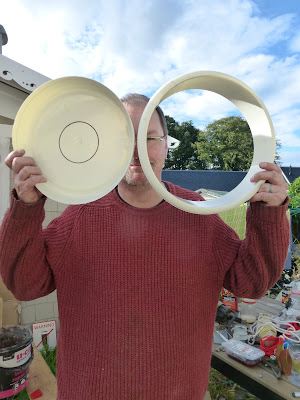 Our pot has been replaced with a new one and Glyn replaced the neighbours' pot with a proper gas flue.  He had to make a concrete base for the gas flue, so a washing up bowl turned out to be the right size to cast it. 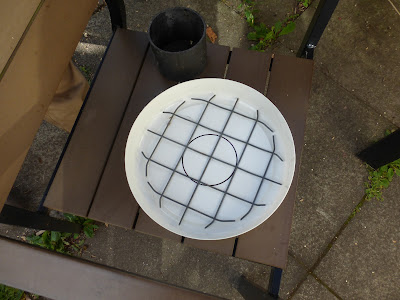 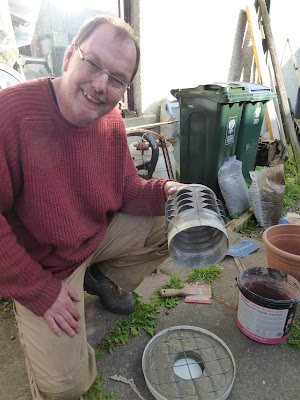 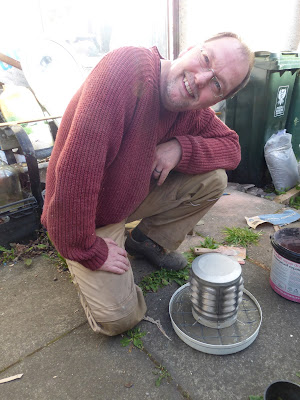 He wrote our names and the date in the concrete. 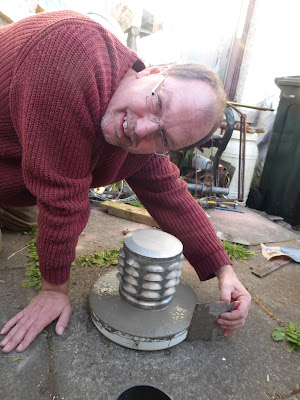 Ready for the roof! 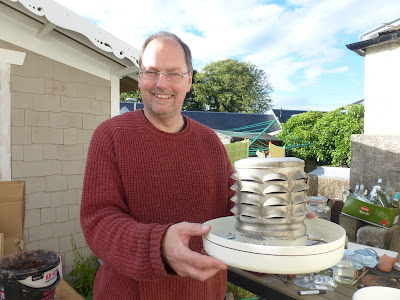 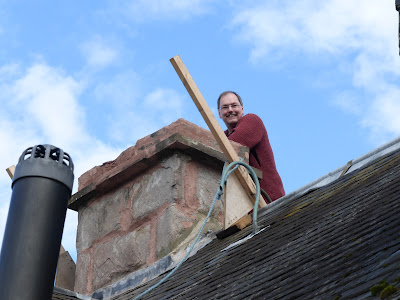 The improvised former for casting the concrete at the top of our chimney.  The old pots somehow balanced on bits of stone sticking out, but this needed a bit of improvement. 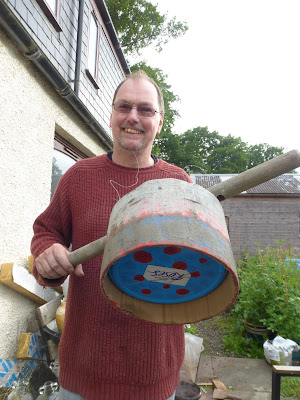 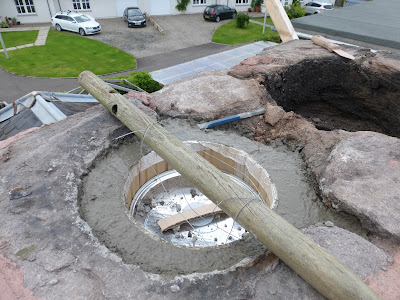 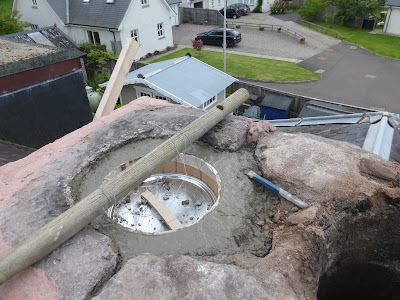 The view from our roof is fantastic, across the field opposite the front of the house to the Sidlaw Hills.  Unfortunately at the moment we can't see this at all, as there are no windows on the first floor at the front.  We'd like to install Velux windows to improve ventilation in the bedrooms but also with the advantage of being able to see the view without having to climb on the roof. 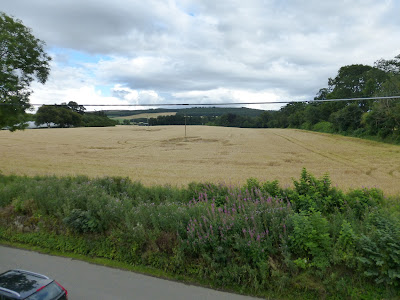 The flat roof, where the crows and pigeons like to dance about in the morning. 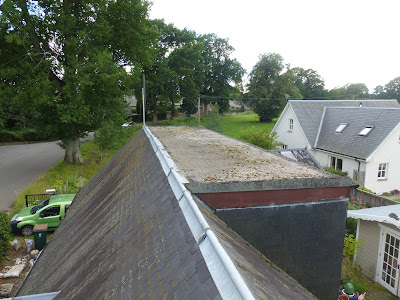 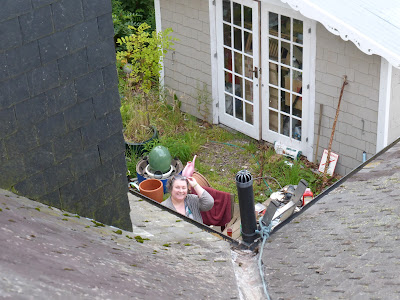 Glyn has nerves of steel to climb on roofs..... I find it interesting the way these things go together.