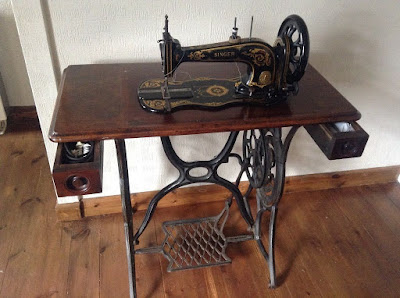 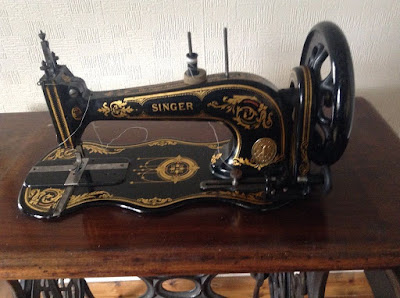 I haven't acquired any vintage sewing machines for a while, but I've always hankered after a Singer treadle sewing machine.  Where to put one has usually been the biggest issue.  We have a window alcove in the hall, currently filled with a not very well made and fairly useless low cupboard probably installed sometime in the 1980s, which would be an ideal spot for a treadle machine - really well lit. Some of the cabinets are quite elaborate and the table tops too wide, but I discovered this Singer 13K was a perfect fit!  We found it on eBay, not too far from my mum's house, and the sellers very kindly offered to drop it off for me (some of the photos are from the eBay listing).  As soon as that hall cupboard has been demolished, it can come home. 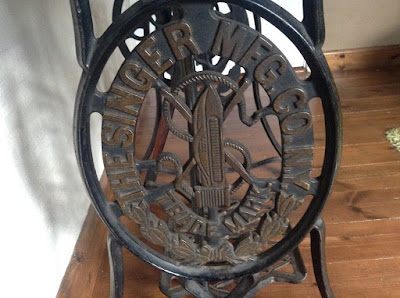 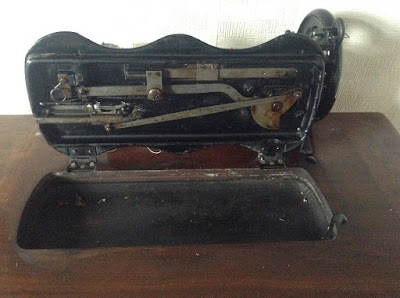 It looks like it hasn't been used for a while, but with a bit of TLC, I hope to have it running and in use again.  It has found another happy home. 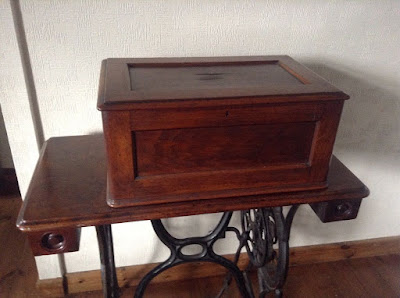 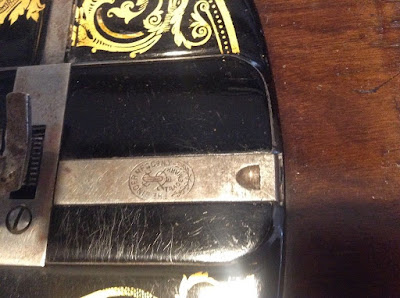 The 13K was the 'industrial' version of the 12K handcrank (I already have two of those) and is a little bit bigger.  You can read more about them here.  This one was made in 1871.  The date number is the higher number below.  So technically this one isn't vintage but is a real antique. 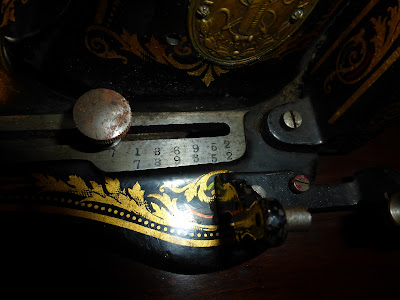 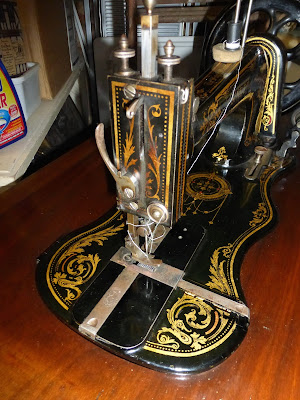 The 13K is a big bigger than the 12K.  The decals are in lovely condition on this one. 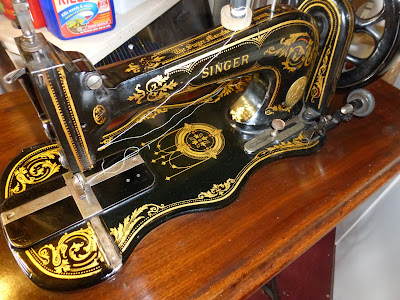 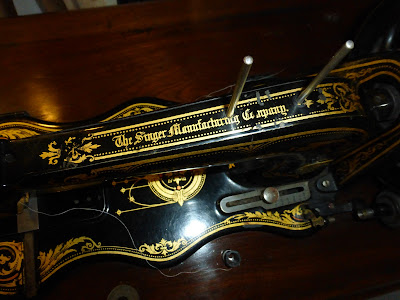 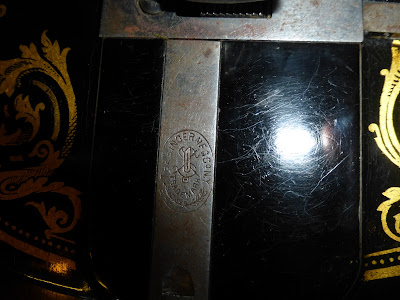 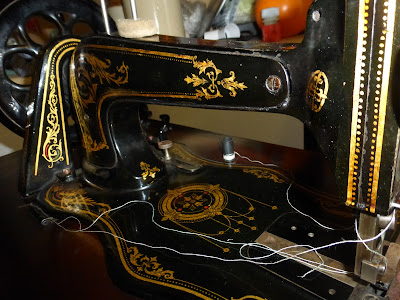 My first machine was a Singer handcrank (a 127K I think) and I still have it.  My mum bought it second hand when she got married and later gave it to her aunts when she got an electric machine.  It is the machine I started sewing on, when I was about 7. 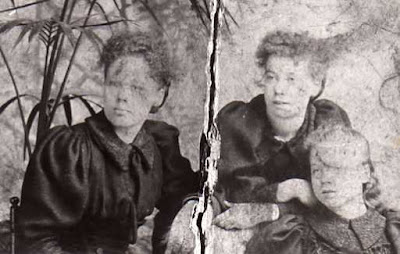 The aunts also had another machine in their house which I can remember from when I was very small.  It was a treadle and stood on the landing, where the light from the window much have illuminated the work.  I don't really remember seeing it with the cover off.  It was my great grandmother's machine, Mary Fasey (nee Darby), and she had been trained as a ladies' tailor before she married in the late 1890s.  The photo shows the three sisters, Annie (left), Mary and Priscilla (the younger girl sitting down).  Annie and Priscilla emigrated to the USA, and Mary moved from the Midlands to Stockton-on-Tees via Pontypridd, where my grandmother was born.  I'm not sure if her sewing machine (which she probably made those dresses on in the mid 1890s) was a Singer or a Jones, but it must have seen a lot of work. If it was a Singer, it is likely it could have been the same model as the one I've just bought, or only very slightly later.  Certainly the treadle table was the same kind, with the iron castings exposed rather than being a 'parlour' cabinet, and it had a similar 'coffin' cover.  Unfortunately it suffered the same fate as many treadle machines - one day it simply wasn't there, and had been sold to the rag and bone man!  I wonder if this was around the time that the houses were 'modernised', and the small third bedroom turned into a bathroom, making space at a premium.

The 13K's drawers were full of all the typical bits and bobs that tend to accumulate with sewing machines, including many original specialist machine feet.  It sometimes looks like sewing machine tool boxes/drawers were the general dumping ground for any unidentified metal bits and pieces.  I wonder what people in future would make of some of the things I have in my sewing supplies boxes, which include a teaspoon (for tacking), coffee stirrers (for marking some sashiko patterns) and masking tape! I will have to download a copy of the 13K manual to identify each foot. 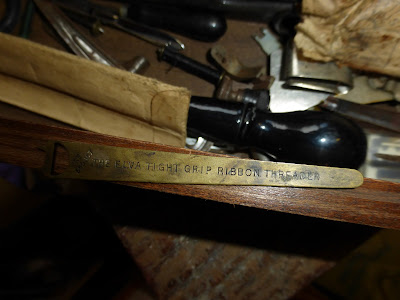 There were many bodkins and this 'ribbon threader', also what seem to be the original screwdrivers. 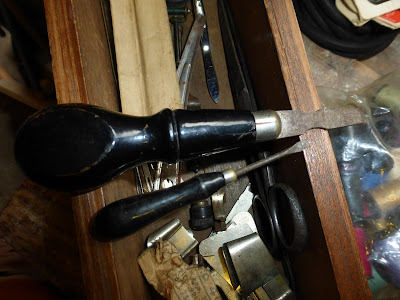 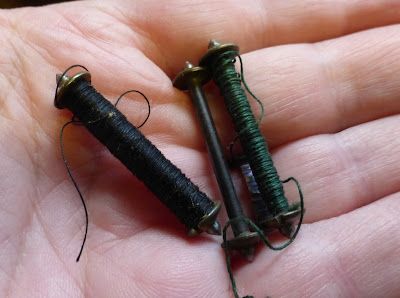 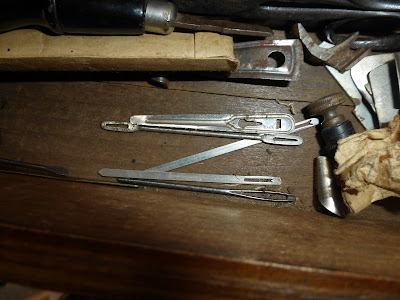 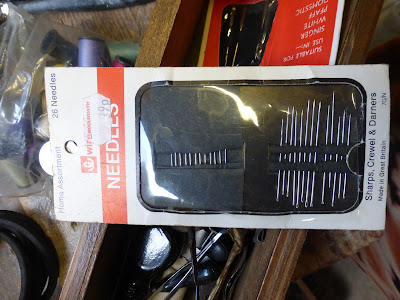 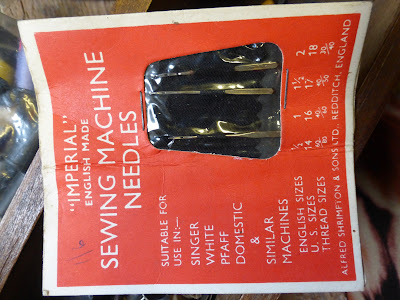 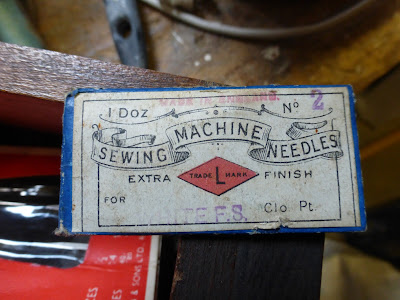 But these early Singer machines don't take the modern needles.  There was just one needle, unfortunately rather rusty, that might fit. 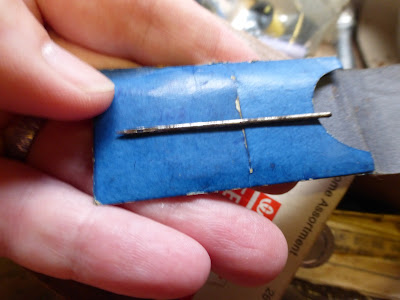 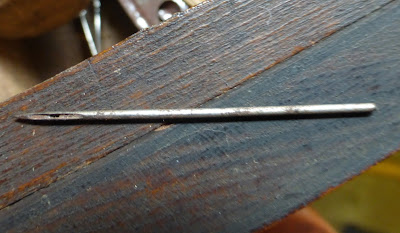 The top of the needle shank is round, without the flat side as is found on modern machines, and has a long groove up the side. 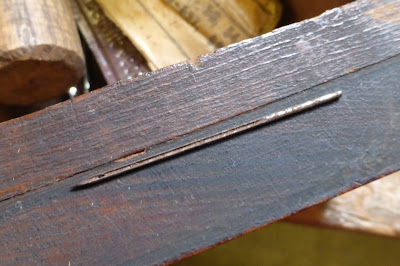 There's one needle on the machine, which may work. 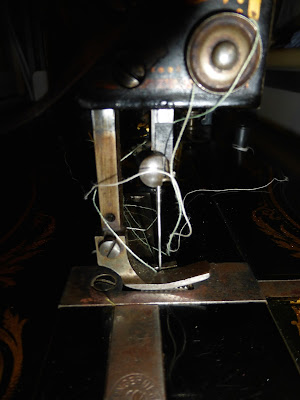 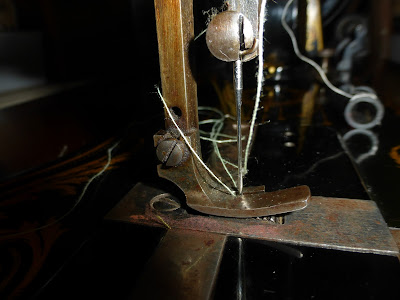 I may have tracked down a few spares.  But I'll be extra careful with those needles and not use them very much.

Can't wait to have the 13K in situ at home.  I hope it enjoys the company of some of my other vintage machines!

Your new machine is absolutely gorgeous! I hope you have success in finding proper needles for it. If not, might there be a way to get new needles to work?

Hi Susan,
What a lovely machine! It may be worth trying Helen Howes for the needles http://www.helenhowes-sewingmachines.co.uk She has several different kinds and was able to help me with a key for my Jones machine. Hope to see you at WTD East. Best wishes Liz.