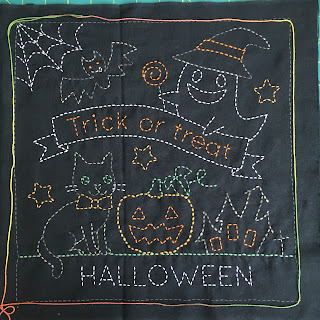 I've had fun over the last couple of evenings stitching the black version of the Halloween hanafukin sampler panel from Olympus Thread Mfg. Co., using an assortment of thread colours in typical Halloween shades - oranges, greys, white, with a touch of green for the 'grass' and the pumpkin leaf. It is available as a kit in black with the 20m thread bundle in my online shop, and there's also a white kit version. The white kit has black thread instead of white in the bundle. There's plenty of thread to give you some options about which colour to use for which part of the design. 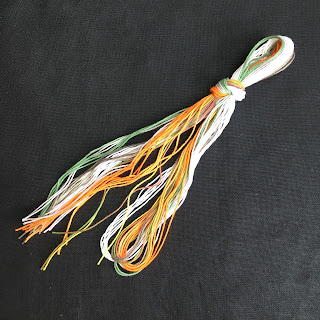 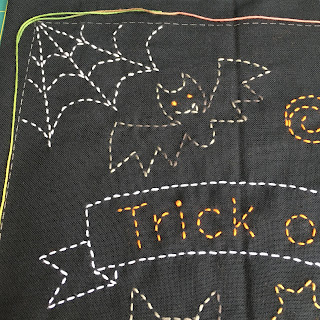 I'm going to use the varigated thread to stitch around the outer border. The bat's eyes and the dot on the 'i' in 'Trick' are French knots. I wouldn't normally use French knots with sashiko, because a) they're not hardwearing enough compared to the running stitch and b) they are not traditional, but this isn't a traditional piece and it will only be used at Halloween, so I don't think it matters. You could even use two tiny beads for the bat's eyes if you wanted a bit of sparkle.

The centre of the panel was stitched through one layer, but I'm going to stitch the border through both fabric layers. Because there are so many starts and stops in this design, unlike in a traditional sashiko design, I didn't want to start and finish without a knot (which would make the stitches at the beginning and end of each line twice as thick), so this will hide the knots on the back. 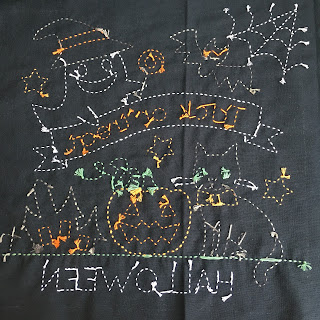 I stitched the pumpkin with a doubled persimmon orange thread for the outline - I wanted it to look ver solid - keeping the bright orange for the mouth and eyes (stitched singly), which hopefully makes it look a bit like they are lit up from inside. The cat was stitched in a single strand of shaded grey thread, with the eyes in green. If this was the white sampler, I would have used black for the cat, but I felt that using grey on black kept the sense of it being a black cat. The whiskers are light grey. 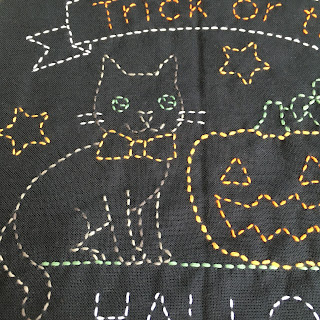 The back of the cat motif. 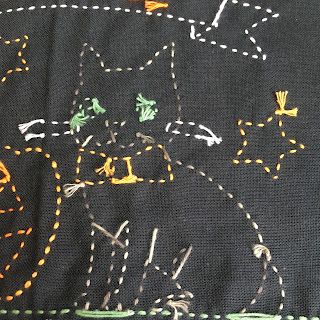 Pumpkin from the back. 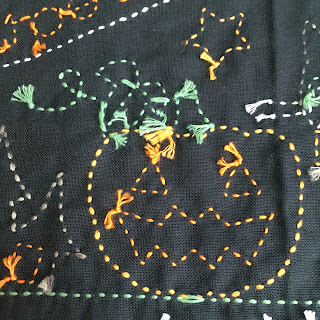 The haunted house is stitched with the same shaded grey as the cat, but doubled, with the windows in single bright orange. 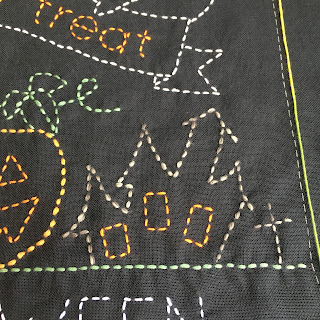 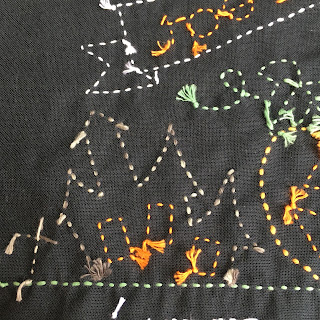 I wanted the ghost to seem less solid and a bit more 'ghostly', so it is all stitched with a single thread. 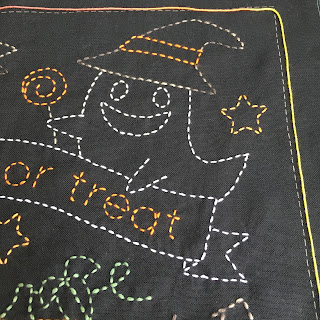 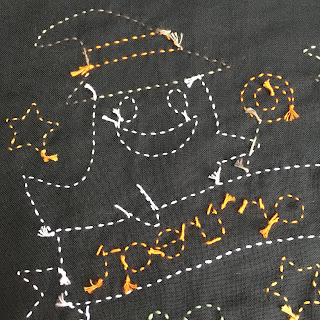 The bat is in shaded grey, and the cobweb is light grey.

To finish off the hanafukin, I will pin the two layers together with the right side facing outwards and sttich around the square outer frame through both layers, then fold in the edges and slip stitch stitch around the panel to give it a knife edge or butted finish. This gives much flatter, neater corners than sewing around the panel right sides together and 'bagging out' through a gap in the side. 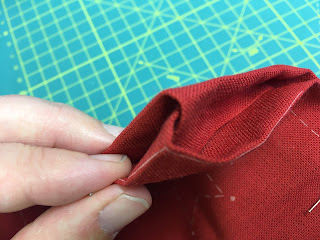 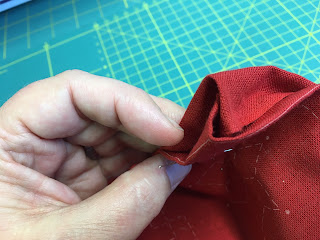 I would have loved this Halloween hanafukin when I was a child. Every year, I used to dress up with my friends and our mums would help us make lanterns - always from swedes, never pumpkins in those days (I'd never even seen a pumpkin until I was about 9 years old!) My friends' mum was great at doing funny Halloween make up, like giving us green faces. One year, my friend used a polystrene head under her arm as a headless ghost. We used to go round the neighbours's houses for pennies, and put them in my Barnardo's charity collection box at the end of the evening - we didn't think about collecting for ourselves.  In the north of England in the 1970s, we didn't say 'trick or treat', but recited this rhyme -

The sky is blue

The grass is green

Games involving dressing up were a big feature of life when I was a child. Alas, I don't have any photos of our Halloween extravaganzas, but here is a photo of another dressing up occasion! I'm the shortest one.