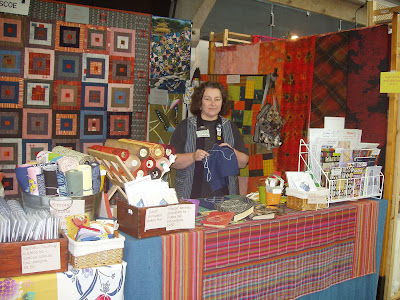 I had six quilts hanging at the Great Northern Quilt Show last weekend - my Kona Bay Challenge winner "Butterfly Dance", "Fish and Chips" (made for the Batik Beauties "Delights of the Sea" challenge), "Super Strips no. 2", "Jelly Roll Crumbs", "The Denman Kannon" and "Lulea Blockhus". I was also demonstrating and trading, so the weekend was quite busy all round. Luckily I didn't have to fit all the quilts in the car to bring home - "Butterfly Dance" and "Fish and Chips" continue to tour at the Autumn quilt shows on the Grosvenor Exhibitions programme, and "Lulea Blockhus" (below) went home with my mum & dad (it was a birthday present to mum several years ago). 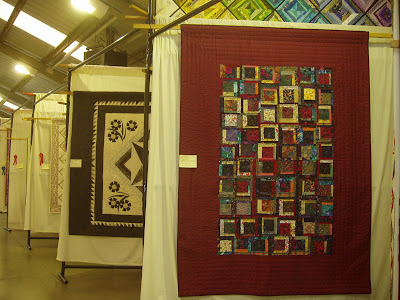 "Fish and Chips" made quite a few visitors smile and I had several conversations about the merits of Lowcock's dandelion & burdock vs their lemonade! To anyone who lived on Teesside in the 1960s & 1970s, the brand name is immediately recalled. I was amused to find real wooden chip forks on the counter of the fish & chip shop opposite the Dun Cow pub in Sedgefield on Saturday night and saved one (unused) for another quilt embellishment in future. My dad made the chip fork on the quilt from a Magnum ice lolly stick! 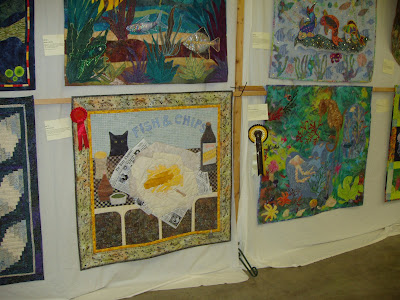 "The Denman Kannon" won a Judges Merit award in the Art Quilt section. Before I enter it into another show, I need to add some more quilting to the centre and make sure it hangs better. The binding looks a bit too tight along the sides, although the measurement is correct, so I think the problem is the dense quilting in the border and the minimal quilting in the centre. There is a wide area across the bottom of the main panel with almost no quilting, so perhaps some blue on blue sashiko would help there. The hitomezashi stitching in the border isn't as dense in the lower half of the quilt, to try to compensate for the lack of handquilting in that area, but it obviously hasn't quite worked. I will add more "invisible" hand quilting to the centre to even it out. 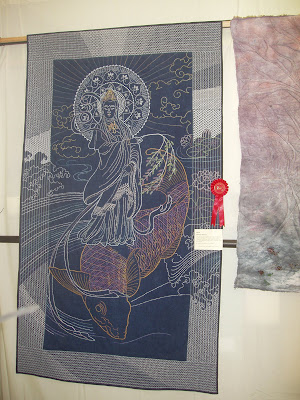 Now that "Super Strips No. 2" is bound and quilted, it is going to be much easier to take around as a workshop sample. The original Super Strips, with 1in wide finished strips, still awaits its outer border. I think I will probably machine quilt it - twice as many quilt in the ditch seams as no. 2 don't really appeal. I still need to quilt the border on No. 2, as I ran out of time to stitch along all the short "piano key" strips. I wonder if anyone noticed? 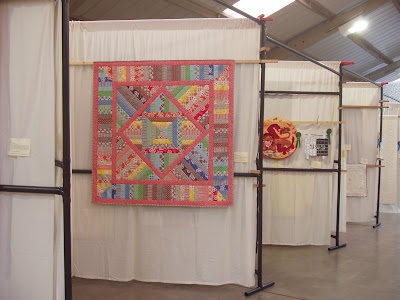 There wasn't much time to bind both "Super Strips No. 2" and "Jelly Roll Crumbs" (bottom centre in photo below), as I had ordered the fabric for the binding from the USA, so I could use one of the fabrics included in the strip cut pack - a printed stripe with a polka dot motif. I had hoped to get a chance to find it at Festival of Quilts but realised there probably wouldn't be enough time, which was right as it turned out, so I ordered it online as a backup. It took nearly a month to arrive, because it got stuck at UK Customs! I don't mind paying the customs charge which is fair enough but I wasn't pleased about the rather excessive delay (Global Priority Envelopes from the USA usually arrive in about 7 days). Running out of time, I decided to sew the binding to the smaller quilt without measuring the binding to match the size of the quilt - it worked fine, and the quilt looks just as flat as the larger one. I used an 80/20 wadding which was quite flat. I wouldn't sew a binding to a polyester wadding quilt without measuring, as I know it would probably end up wavy. 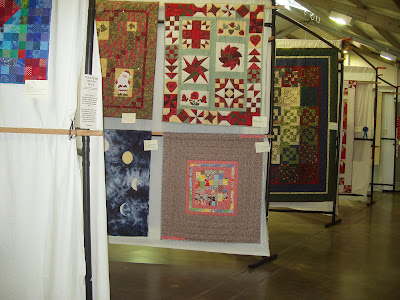 As this is our biggest northern show, there were a lot of entries by people I know on the local quilt scene too. Overall, it felt like the standard was higher this year, but there was still a lot of variety and quite a few first quilt show entries.

I was judging some of the sections on Wednesday (the organisers keep you well away from your own stuff and your friends'!) and one of the nice things about being a quilt judge is being able to award a "Judge's Choice". This is the one award where you can simply choose your favourite quilt from the show, as all the other prizes are awarded on a points system, with several judges' results added together. I can be from any section, not only the ones you are judging.

This entry in the Small Wallhanging section, "Dunstanburgh Castle" by Wendy Deverill, was my Judge's Choice. She wrote, "This is my favourite place, on the Northumberland Coast. I used commercial fabrics for the background, and dyed the sea and sky fabrics for the front panel. I machine quilted the green fabric with shirring elastic in the bobbin, which was great fun." If you left click on the photo, you should be able to read my comments. 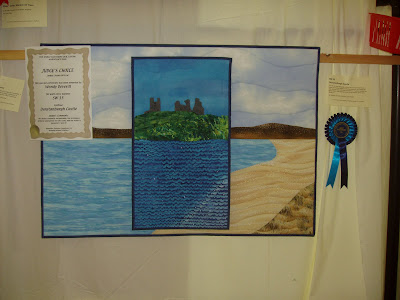 I visited Dunstanburgh Castle, accessed along a footpath from Craster village, many times when we holidayed in Northumberland when I was a child. It is in a very isolated and exposed spot. I often wondered what it would have been like to live there.

My friend Debbie Gordon entered a smaller version of my "Masu" quilt in Small Wallhangings, with a different quilting design and using a selection of my wools and silks (the original quilt is behind me in the photo at the top). The gorgeous autumn colours were much admired. 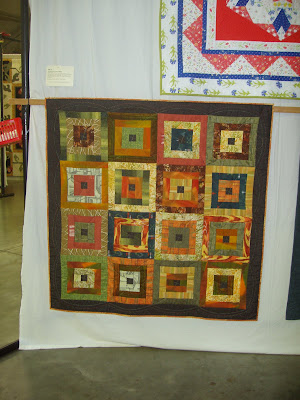 Here we are at Gresford Memorial Hall's fete on Monday last week, both sewing bindings as fast as possible! 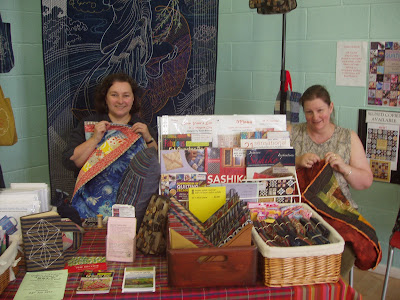 Interesting to read your comments about judging. I enjoyed the Harrogate Show and was quite interested to see where awards were made - not necessarily the quilts I would have thought obvious for an award!