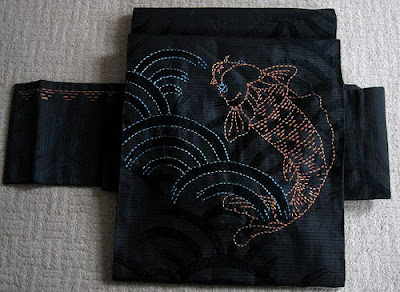 My fellow kimono enthusiast Kate has completed her mofuku nagoya obi remake. Obi is the sash worn with kimono, nagoya obi have the part that wraps around the body already folded in half and stitched in place, and mofuku means it was (originally) mourning wear - quite a lot of mofuku obi with very beautiful woven patterns turn up for sale on vintage kimono websites, at reasonable prices for some very pretty weaves, but need a colourful remake like this to really be wearable (other than at funerals!) I printed off a lot of koi pictures and took the bits from each one that I liked. I think the head was taken from one I loved on Ichiroya. I just drew it up on a piece of A3, it wasn't too hard (trust me, I am no artist at all!), trying to get the tail to curve in the right way was the hardest... (Susan) gave me advice on how to fill in the scale pattern, and gave me lots of support in general since this was my first sashiko project! I really enjoyed doing it especially because you see results quite quickly (and I'm impatient...). I spent a while looking for the right obi (the woven pattern) as I knew the sort of design I wanted, with either wild waves or segaiha.

I did a practice version, which helped no end. If I never do the scale pattern again, it will be too soon!

That means Kate will have to try the urokozashi pattern again! I didn't like those kinds of hitomezashi patterns the first few times I tried them (I thought sorobanzashi was really just too hard) but, once you've tried them a few times and got into the right frame of mind for stitching them, these patterns are so versatile and actually quite quick to do, plus you can bend them around a pattern. When I originally stitched my Koi (based on a print by Hokusai and now a kit with Euro Japan Links), Reiko Domon suggested I should have used urokozashi (scale stitch) for the fish body, but I thought this would make the design too difficult for beginners. The black and white detail is from the indigo and white version I stitched later. 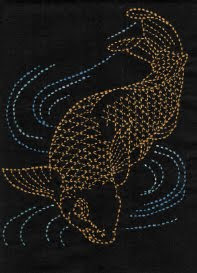 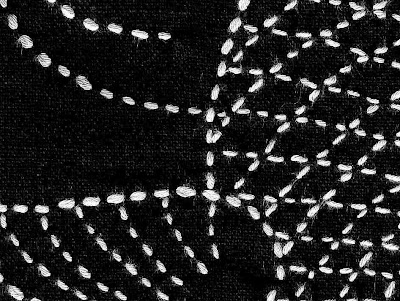 The koi scales on the "Denman Kannon" allowed more room for detail - but this time urokozashi would have been too small, so I made a variation on two larger sashiko patterns. 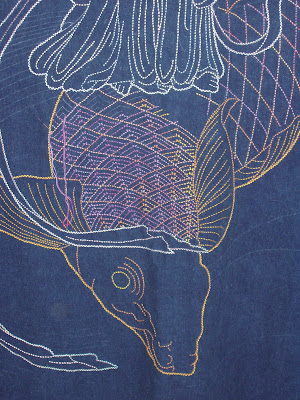 I used it to make the outer ring on the halo instead. 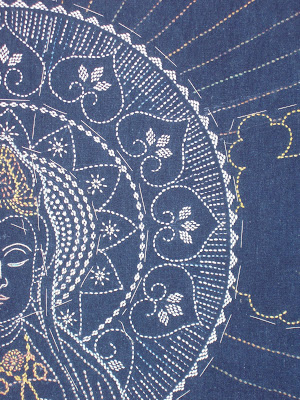 If I do a medium sized version of the koi sometime, I definitely want to try urokozashi, like Kate did. It looks so effective.
Posted by Susan Briscoe at 20:41

The run stitches so dramatically in line and equidistant are not very easy to do.They look lovely in colors and designs and patterns.In India these would be used to make lovely blankets for children...that is how it all started.

Thanks for sharing my koi obi! It's funny how two versions can be so different. Your koi has a lean, muscly look and definitely seems to be powering his way through the water.

I'm pleased with how it turned out, although hopefully my next project will not include urokozashi! ;) Though I do love the way it looks on the Kannon...