To enter or not to enter? 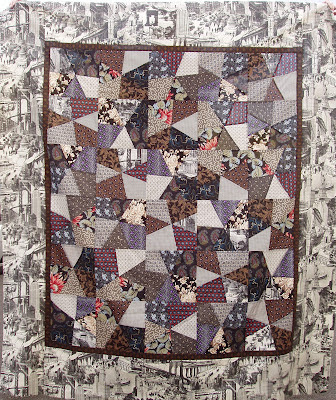 I have decided I will probably pull out one of the quilts destined for Harrogate next week, but want some opinions! 'Spinning Squares', the workshop sample quilt, was going into the 'In a Spin' theme catagory. Not only am I not 100% happy with my idea for quilting the border, the wadding doesn't seem to like handquilting and is hard work. It is an 80/20 cotton poly I got from EQS on the big roll. I've used it for a lot of other things and it's been great, but realise I have always machine quilted it so far.Unfortunately, the entry description mentions hand quilting...

So far I have hand quilted in the ditch around the blocks and the inner border. The blocks were going to have some hand quilted curves in them, big stitch. It would actually be easier to machine quilt the lot, but I'm busy this weekend and probably wouldn't have time to do it for the show (quilts are handed in next Tuesday) but might be able to do it in time if I really go for it.

I was going to stitch a rope pattern by hand in the border, which is a collaged picture print of Manhattan in the 1930s. That was my second choice idea. Originally, I was planning to quilt along the various skylines in the print, but it didn't do much for it really, so I'll take that out. I now think that just machine quilted straight lines, or maybe wavy lines (3 step zigzag lengthened) about an inch and a half apart would be better.

I could leave in the handquilting in the ditch for now and machine quilt over it later - I don't think it will show (busy, dark prints).

Whatever way, it isn't going to be hand quilted! I think I'd give myself an RSI doing it!

So - push ahead and enter it with simple machine quilting or withdraw it?
Posted by Susan Briscoe at 10:51