Braids and the lucet 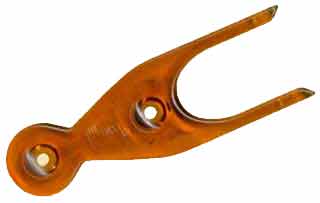 Heather sent me an e mail asking about the drawstring cords I used for my bags in 'The Ultimate Sashiko Sourcebook', so she gave me a push to write a short post about the lucet (the photo above is from the Lucet Company).

The cords I used for both the kinchaku bags were home made :-) using a brilliant little gadget called a lucet.

Ziggy redesigned the traditional lucet, a double loop braidmaker, to be more efficient and ergonomic.  His version is fantastic - so easy to use and the cord grows really quickly once you've got going.  Ziggy puts in quite a few appearances at national craft shows, and is a great teacher too.  The lucet, and all the techniques for making some of the fancier cords, require a book in their own right - luckily Ziggy has written a few.  You can book him for workshops here.

I bought my original lucet from him at a Renaissance fair in York way back in 1996.  It was one of 30 he made from reclaimed oak.  Since then, I've acquired a few others from him, including a fantastic pair made from hawthorn.  The wooden ones are nicest to use in my opinion, as they just become better with use.  All his lucets turn nicely in your hand, which is the secret to making the braid smoothly and quickly.  They are the perfect travelling gadget for crafters, as I've never had any security problems re using them on planes and of course they are small, neat and don't weigh much, plus the action of braiding won't make you jab your fellow passengers as you work.  When you can make your own cords and braids, you have far more choice available than using commercial cords, so your little bags are much more unique.