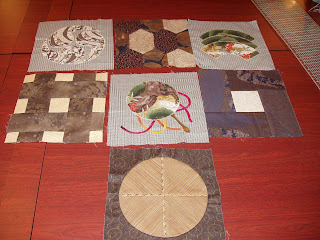 Here's the second set of photos from the sampler quilt block course held at The Royal, Bridlington, last week.  Each day focused on a different set of techniques, so by the end of the third day, everyone had a variety of different blocks.  There were lots of different colour schemes, not only taupes!

These blocks were coordinated around a Kona Bay panel.  It will be sashed in pink (the mottled pink on the left) and bordered with the gold Japanese print.  To make full use of the panel, column of the blocks on the left will have a little patchwork insert at the top and bottom.  Little touches of yellow brought out the moon image. Just spotted that we had the bottom right block on it's side :-) 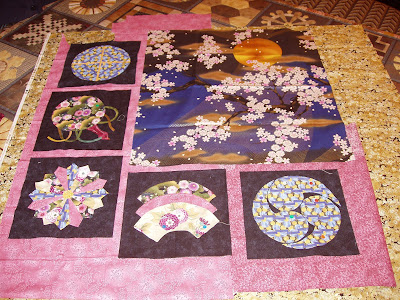 Fiona added to her block collection in black, white and green.  She's going to use the striped print fabric at the top as her border, so it became the starting point for this colour scheme.  I love the fresh, modern colours - reminds me of Sweetwater's 'Authentic' range for Moda. 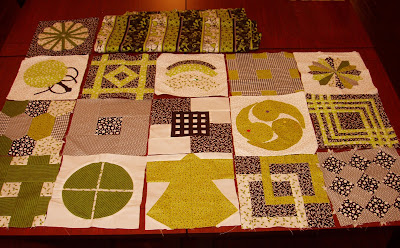 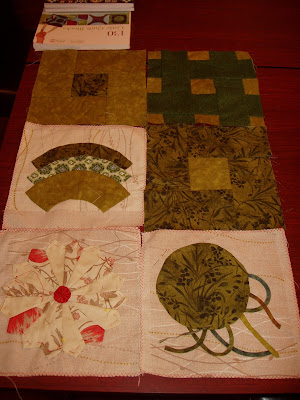 Margaret made her blocks in sophisticated blues, blending one of my tsumugi cotton stripes with tiny antique prints. 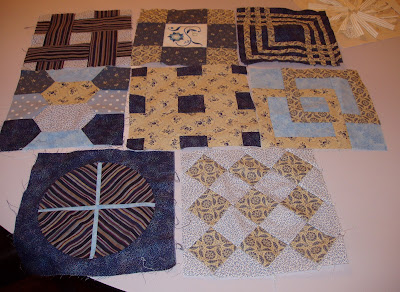 This set is beautifully pieced and includes some of the same blocks in the two sets above.  The block at the top centre uses the part sewn seam, as well as the bottom right and centre blocks - quite as tricky block to assemble, but it looks great with the woven effect achieved with the 'interlocked' squares.  The top left block is also a challenging one to make, with 1/2in finished strips and squares that need to line up accurately to complete the illusion. 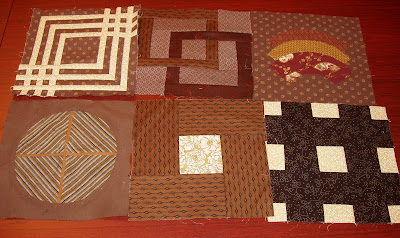 Sylvia's applique blocks are fused and machine appliqued, rather than needleturned.  For a fused version of block 111 from the taupes book (at the bottom), I cut a template for the whole central piece in one, rather than piecing the centre and hand appliqueing it to the background.  This means the strips are also appliqued rather than being pieced as they were in the original.  After folding a piece of paper into 12 segments, I cut the wavy edged motif in one.  These are going to become a wallhanging. 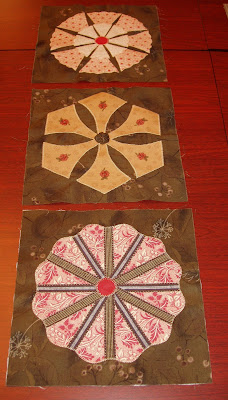 Maggie's blocks are in lovely autumn colours, combining lots of gold prints.  She didn't think the fabric in the centre of the bottom row worked very well (the peacock feather design), but I think it does - hope she includes it when she makes her sampler quilt. 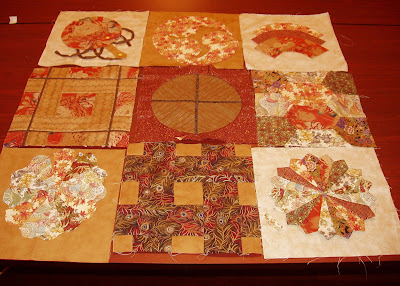 This set was made with cream and white tone-on-tone prints, so it is very subtle - not easy working with very low value contrasts.  However, they will be thrown into relief by the quilting, because that's going to be in silver metallic thread!  I'm looking forward to seeing some photos of these blocks finished. 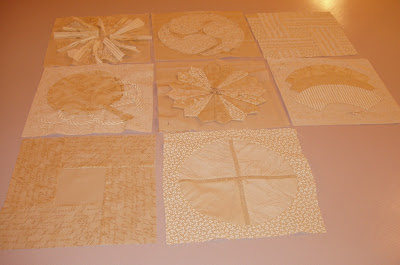 Heather also used autumnal colours for her blocks, with a very seasonal miniature chrysanthemum print for the uchiwa fan block in the centre. 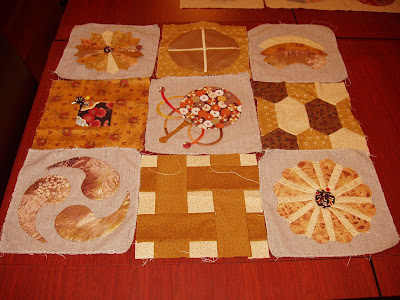 I think the autumn golds and rusts were the most popular colour combination - these are definitely the colours of the season right now. 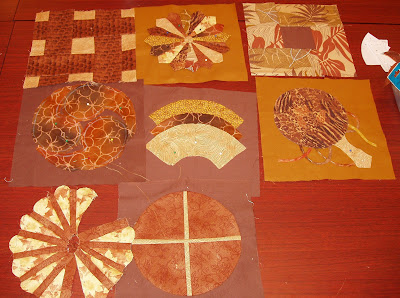 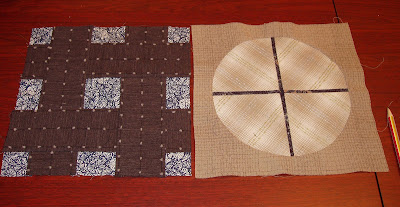 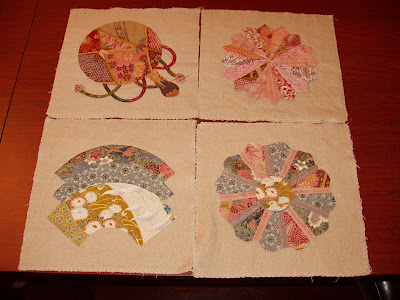 Having the same background fabric throughout makes arranging the applique blocks much easier.  I finally worked out a good arrangement for my floral applique blocks form 'Japanese Taupe Quilt Blocks', by removing four blocks that had greyish backgrounds.  These had been almost impossible to place so the other blocks looked balanced, both in terms of the background fabrics and the 'weight' of the applique motif.  I'll use them in a small wallhanging. 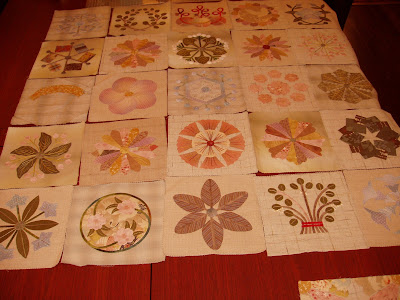 The first layout I tried is shown below - spot the blocks with the 'wrong' backgrounds.  With all the other blocks having warm toned backgrounds, the grey plaid ones didn't look right. 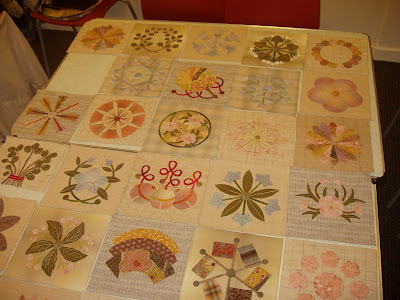 Changing the position of colours/values in a quilt can make such a difference.  Here are two quilts finished after my Time and Time Again workshop at The Royal in February last year.  The first has a symmetrical arrangement, with the stronger colour contrasts towards the centre while the second has a side to side grading effect.  So many possibilities with this design. 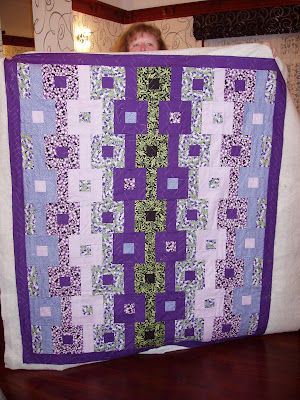 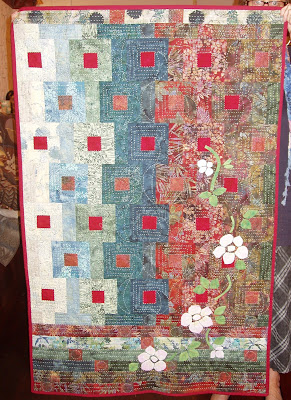 This Super Strips was made after last January's workshops too.  The suble taupes Jelly Roll was one from Moda. 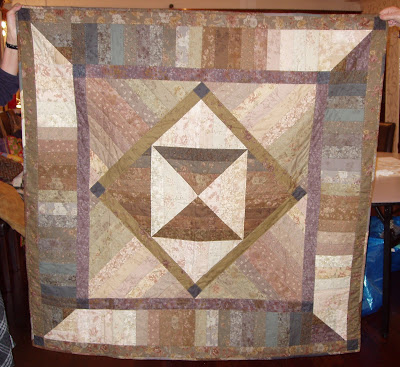 We had a very enjoyable and productive three days, with the residential quilters stitching away in the evenings as well - of course, that is one of the advantages about doing these courses on a residential basis. It is also lovely to be able to have time to concentrate on your patchwork without having to think about things like preparing meals, as The Royal do an excellent buffet lunch for these courses, plus morning coffee & biscuits and afternoon tea & cakes, so there's no need for a packed lunch.  Not sure what I'll be doing there next, but the courses for after the new year are booking up fast - with tutors including Lilian Hedley, Jennie Rayment and Katherine Gurrier.
Posted by Susan Briscoe at 16:07