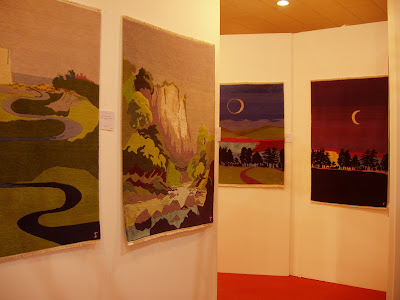 We visited the Knitting and Stitching Show at Harrogate on Saturday - one of the shows where I usually go as a visitor, rather than as a demonstrator or trader.  The venue is huge with four main halls and a basement.  Out of the exhibitions this year, the one I enjoyed most was John Allen's gallery, 'The Forbidden Kingdom'.  He allowed me to take some photos of his work.  These are carpets - when we walked past the gallery on the way in, I thought they were woven tapestries, but they have a woven pile.  Read more about his work at his website, here.

My new exhibition of carpets for the wall and mixed media pictures is called The Forbidden Kingdom. All the work has been inspired by Nepalese culture and landscape. I have travelled to Nepal for many years trekking in the high Himalayas and exploring old cultural sites. The exhibition is my creative response to my experiences and Nepalese visits. The work starts with figurative pieces which are slowly abstracted, with elements of decorative pattern and flowers being introduced. This work leads the way to the final section, which is totally decorative or abstract. This later work has been influenced by the strange mix so often observed in Nepal of the sophisticated being juxtaposed with the naive. Into this heady mix I have introduced my own western creative style and ideas. The mixture of religious cultures and architectural styles experienced in Nepal are not only fascinating, but visually stimulating and sometimes disturbing. Alien elements are often introduced in to traditional themes and used together, producing exciting sometimes disturbing, but always interesting, visual effects.

The exhibition at Harrogate included a lot of pieces inspired by the British landscape. Initially, this piece, 'Pink House' was my favourite - I like the way value and texture is achieved by patterning in black and white. 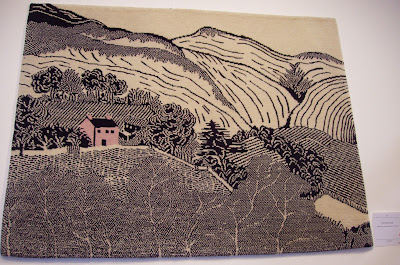 I like the areas of flat colour given texture by the carpet pile. 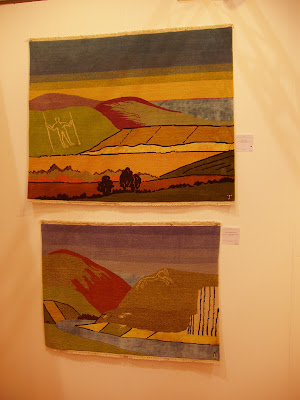 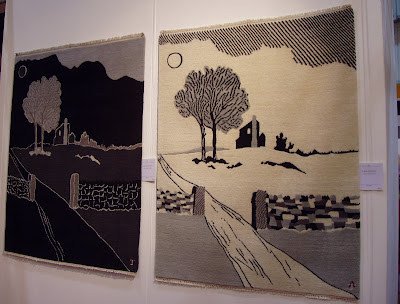 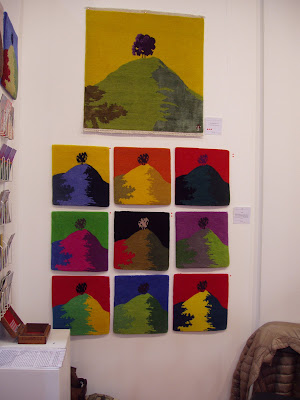 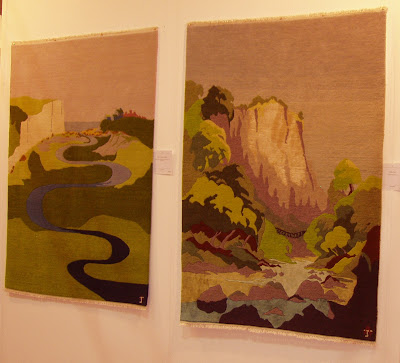 There was far more wool/fibre at this show than the last time I attended several years ago.  About six years ago, the show seemed to be going towards scrapbooking and papercrafts, and before that there was a LOT of cross stitch, so it's good to see it becoming more fibre oriented again.  There were so many gorgeous yarns and rovings, so plenty of materials to inspire, plus the quilting side of K & S seemed to be back to strength.  We enjoyed meeting friends from other shows but from the other side of the table this time.  A good day out and we were there the whole day.
Posted by Susan Briscoe at 11:45