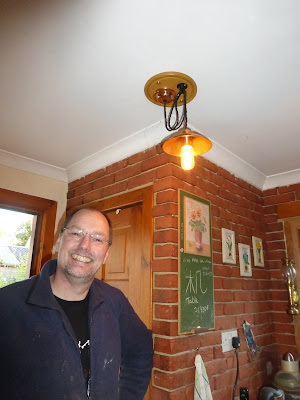 We had a couple of enjoyable days with our friends Jan and Keith - Jan is the Region 2 rep for the Quilters' Guild of the British Isles, so there was much catching up about Festival of Quilts and other quilty topics, while Keith and Glyn were into discussing coach building camper vans.  After they left today, Glyn started on the kitchen, in a small way, with the new light fittings.  These are two handmade copper plated aluminium alloy with 'Edison' filament vintage style bulbs for a steampunk look.  They are replacing two 1970s brass ball eye spotlights, so the holes left in the ceiling were quite big and the new lights have been mounted on circular wooden plaques to hide the holes (can guess what these are?*)  The other kitchen lights are two original vintage electric wall lamps from the White Star Line shipping company, in brass and copper (think Titanic), on either side of the kitchen window.

This is one of the old lights. 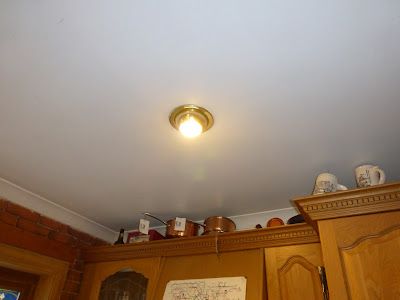 When Glyn removed the first one, we could see that the kitchen ceiling is actually a false ceiling.  There is another older one about 10in above it, covered with polystyrene tiles. 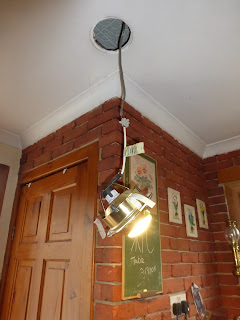 It was a bit of a revelation.  I had often wondered why the ceiling inside the pantry/boiler cupboard seemed higher than the rest of the room.  Now we know.  Before this false ceiling was added, the ceiling would have sloped for about a foot right around the edge of the room, the same as inside the cupboard.  The brick slip 'tiles' seem to go right up to the edge of this original ceiling, so these must belong to kitchen makeover #1, which seems to be 1970s or late 1960s, while makeover #2 is from the 1980s or early 90s when the (now rather dilapidated) oak kitchen was fitted.  We are now debating taking down the false ceiling, as it could look rather attractive with the slope around the ceiling edge visible, plus it would give a little more space above the top storage shelves.  It will be a messy job but should be worth it.  We would have to get those polystyrene tiles off too.  Having the higher ceiling will give the room more of a vintage kitchen feeling. 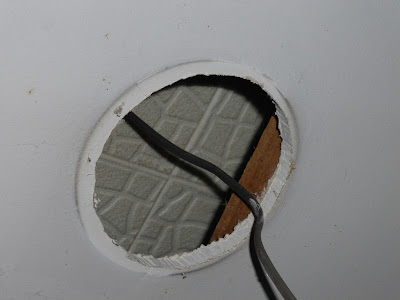 I wonder what other secrets and mysteries we are going to uncover as we do up this house?


* The circular plaques are small chopping boards.
Posted by Susan Briscoe at 21:04

Nice to uncover some mysteries in the house! As I was reading, a gasp of anguish came to me as I saw you're thinking about pulling the polysterene tiles off to gain some height into the kitchen. It reminded me of my bedroom ceiling that was covered with those tiles when we bought the house 15 years ago. It was a huge work to try to get the ceiling nice and flat after taking the tiles away... A myriad of glue holes had dotted the ceiling. Such a huge work that we never quite managed to recover a nice surface. Maybe a professional could have helped but i did not have the money and still hasn't got it. The important thing also is to choose a sort of lightning into the kitchen that will not be too revealing of the flaws of the ceiling once the work is done. Lights pointing to the floor is essential! So, it's a great idea, given the amount of work your man can handle, i shouldn't be surprised if he manages to get excellent reseults... But beware! ;-)

Yes, we're anticipating quite a mess left behind once we've taken the tiles down. It won't be any worse than the mess on the wall behind me in the photos! The pics are so selective, the old kitchen actually doesn't look too bad in them. The wall behind me, which you can't see, has the remains of glue and old cork tiles all over it. Depending on how well we can clean it up, we might need to plasterboard all over it. I'm going to decoupage that wall with old adverts printed onto brown 'wrapping paper' sheets, so the overall finish doesn't need to be as good as if we were painting it. The wall behind the wall units seems to have a few odd secrets too, as the tiles behind the built in hob are a couple of inches forward of the wall at the top of the units (another false bit?) and, where we already pulled out the built in fridge freezer (broken), we can see the edge of some T & G wooden paneling. It is going to be quite an adventure. But first, we need to finish the summerhouse interior, so we can use it properly for storage while we start on the house.