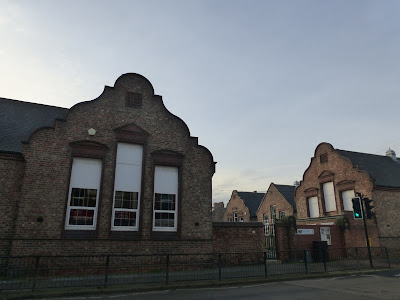 The people who lived in Stockton-on-Tees in the late nineteenth and early twentieth centuries built some very decorative public and private buildings.  While some of the buildings in the town centre are quite well known for their decorative brickwork and woodwork, I've been wanting to take photos of various architectural details along Oxbridge Lane for while.  Many of them would be great resources for quilting patterns.  The gable ends of Oxbridge Lane school, my dad's old school, built in 1890, show Dutch influences.  Unfortunately the commemorative stone has eroded over the years. 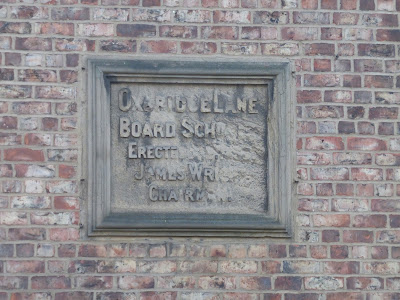 These decorative brick panels on the gables are very Arts and Crafts influenced. 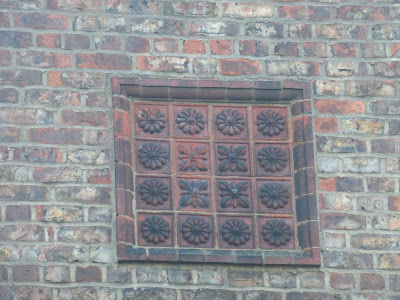 Part of the same panel appears on the front of a rendered house opposite the cemetery. 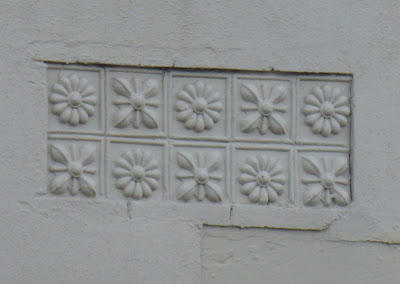 There's a similar ornate gable over this shop, one of several identical ones on the same building. 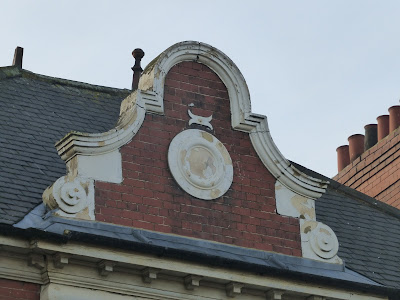 Fancy barge boards and finials must have graced many houses when they were first built.  Spot the floral panel again. 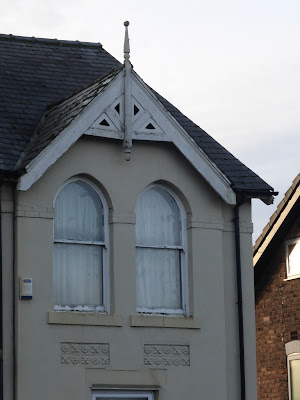 This late Victorian house is being restored at the moment.  Luckily the original woodwork looks like it was still in great condition.  I love the heart and swag motifs and the trefoil cutouts at the ends. 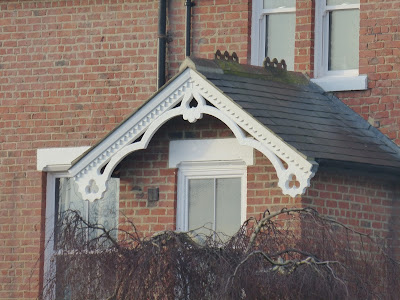 The main gable on the same house. 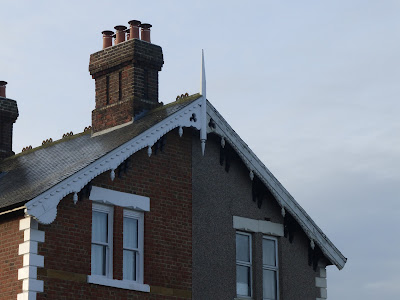 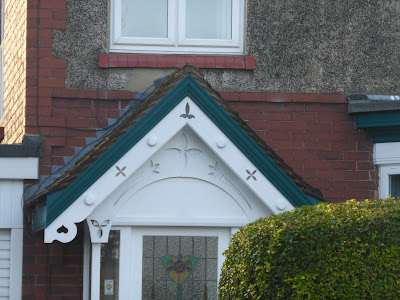 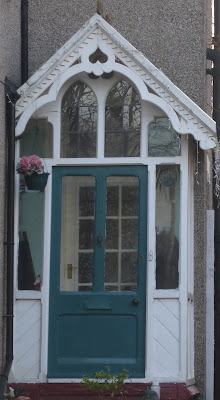 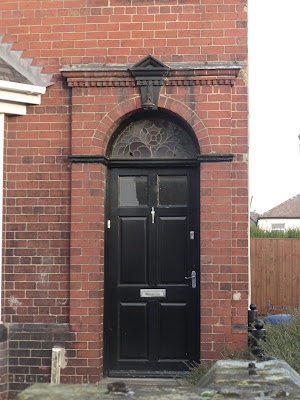 Scrolls and leaves support this lintel. 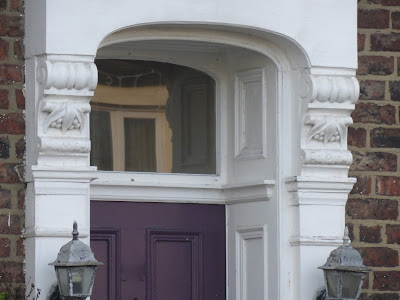 There are many more elegant designs seen at Oxbridge Cemetery. 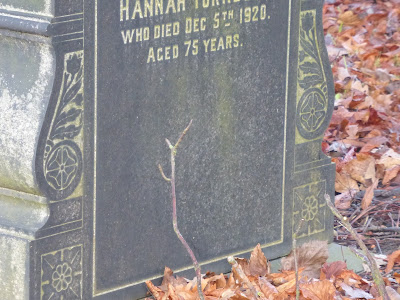 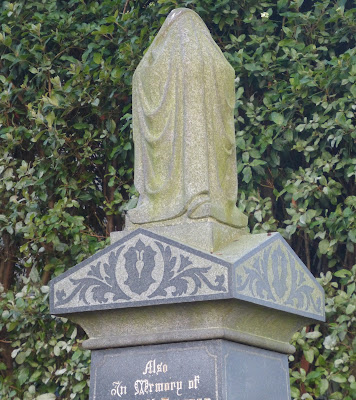 The original cemetery railings were removed during WWII. I don't know if the gates are original or replacements, but they are much more substantial than the railings seen on modern houses in the area.  More scrolls and fleurs de lys across the central bar. 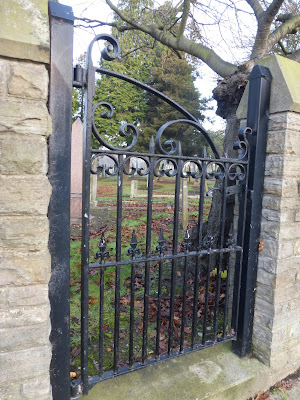 Many houses in this area must have originall had cast iron railings, now all gone, and often replaced with wooden fences.  Beyond the roundabout, there's a lot of ivy about. 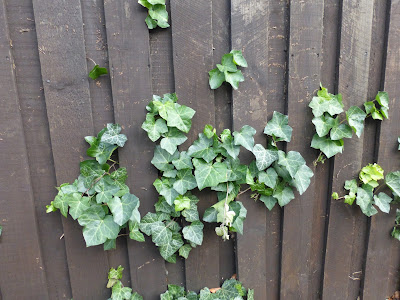 Further along the lane, some of the original street signs remain. 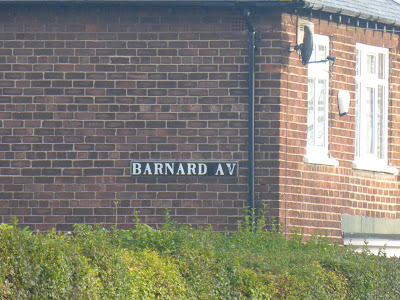 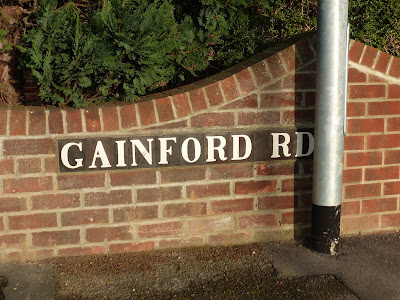 Most of the 1930s and later semi detached houses haven't fared as well as some of the Victorian ones with their doors and windows.  Almost all of them have large bay or bow windows, which have all rotted and had to be replaced.  The modern stained glass and faux leading doesn't give the same kind of reflections as the originals and the colours are quite different too.  This looked like one of the few old windows left on these houses. 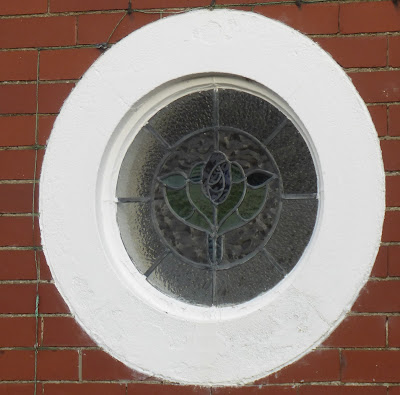 I only spotted one original front door further along the lane.  I walked along this road many times when I lived in Stockton and used to love the patterns in the stained glass and other architectural details when I was a child.  Now I think there must be a quilt design in them! 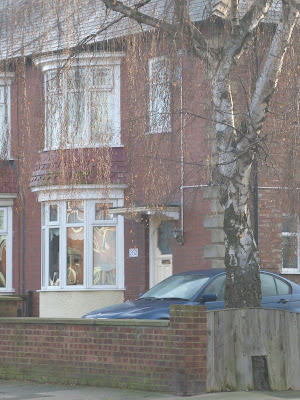 love the walking tour of such beautiful architectural pieces adorning all these buildings and homes. thank you. and yes, they are certainly inspiration for all kinds of quilting. Merry Christmas to you and yours, from Iowa, USA